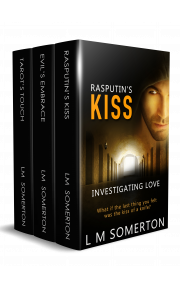 What if the last thing you felt was the kiss of a knife?

Rasputin’s kiss is lethal. He’s a ghost—killing and disappearing into the night. With few leads and four bodies on his conscience, Detective Inspector Alex Courtney and his team are running on empty and it’s only a matter of time before Rasputin strikes again.

When Alex recruits a young detective to play the part of his boyfriend and provide a tempting target for a killer, he knows he is taking a huge risk. He doesn’t expect Conor Trethuan to be a perfect potential submissive. When their mutual attraction becomes more, Alex has to face the conflict between his possessive instincts and the need to push his young lover into danger.

Investigating their feelings has to come second to investigating the case. There’s no time to decide if what they feel for each other is real. With Rasputin closing in, they may not live to find out.

Never underestimate the power of obsession.

After the trauma of the Rasputin case, Detective Inspector Alex Courtney and his boyfriend, Detective Constable Conor Trethuan, are in desperate need of a holiday.

The peace and tranquillity of Cornwall can’t eradicate Conor’s nightmares, though, and the unbearable prospect of losing Alex drives him to confess feelings that he isn’t sure are reciprocated. Alex responds in the best way he knows how—by issuing orders and claiming Conor’s body as well as his heart.

Prematurely recalled to work, they are thrown into a dangerous trafficking case focused on a leather bar with a hardcore reputation, Spikes. Conor is sent in undercover, not knowing that he is only a decoy. When Alex learns that the motivation behind his team’s involvement in the case might not be as straightforward as it seems, he realises that his actions might jeopardise not just their relationship, but Conor’s life, too. A shadowy figure from Conor’s past is about to step into the light.

Can truth be found in the cards?

DI Alex Courtney and his lover, DC Conor Trethuan are under enormous pressure as their team investigates an arson case and a murder.

It soon becomes apparent that the two cases are linked and the race is on to find a vicious killer. A tarot card is placed with the first victim and the detectives are left to interpret the clues it provides. When Conor receives a note from the killer making reference to another card, the whole team is shaken. Their worst fears are realized when a second body is discovered, along with another tarot card.

Conor suspects he has been followed then a hit and run leaves him injured. Alex wants nothing more than to wrap his lover up in cotton wool and protect him from the world. But is Conor the killer’s target or just a pawn in a much more sinister game? As the clues come together, it seems that the motive for murder might be revenge.

Inspector Alex Courtney paced back and forth across the silent incident room like a caged tiger with an attitude problem. He didn’t lose his temper often, but he was getting dangerously close to a firework display to rival New Year over the Sydney Harbour Bridge. He raked his fingers through hair that already stuck up wildly then loosened his tie, which threatened to strangle him. He muttered and cursed under his breath before he spoke out loud, “Nothing! We’ve got nothing! That’s four murders in the last six months—this psycho’s fucking playing with us and he’s winning the damn game.” Alex stared blindly at the large pin board that took up almost the entire length of one wall.

Four young faces gazed accusingly back at him. Four young men who had been ripped from their lives, slaughtered and dumped like garbage. Alex knew them all inside out, their faults and qualities, their ruined hopes and dreams, the desperation and grief of their families and friends. So much energy and potential removed from the world. Every death cut him to the core.

He slammed his fist against the wall in frustration then spun around to witness several of his team, who were collectively attempting to be inconspicuous, wincing in sympathy with his abused hand. Chips of plaster and flecks of dust rained onto the floor. Self-inflicted pain diffused his rage and, much more quickly than it had built, all the tension dissipated from Alex’s lean six feet, three inch frame. He ground the heels of his hands into his eye sockets, attempting to rub away some of the exhaustion that came from weeks of marathon working hours and little sleep. He knew the action would do nothing to soften the deep black circles that sat beneath his eyes. It was getting so that he was afraid to look in his bathroom mirror in the mornings, his reflection was that scary.

He surveyed his team, all looking just as tired and haggard as he was. “Okay. I have an idea that I want to run by you, but it’ll sit better on full stomachs. Give me ten minutes to do a run to the canteen. Someone put the kettle on, because you’re going to need strong coffee too.” Alex used the short walk to and from the staff canteen to play the idea he’d been working on over and over his mind, testing options and possibilities. It was a bit radical, but that was what the case needed—something that pushed the boundaries of the investigation.

Having made a decision about what he was going to do next, Alex felt more relaxed than he had in an age.

He was a little anxious about how the team would react to his plan but when it came down to it, he was in charge and they would have to go along with it whether they liked it or not. Still, he would much rather have their whole-hearted support. He knew they were as frustrated as he was about the lack of a break in the case, so maybe his idea wouldn’t be shot down in flames. He returned to the incident room with a determined set to his shoulders. Steaming mugs of strong coffee had already been handed out and Alex distributed the bacon sandwiches that he had liberated from the canteen. Okay, so it was a bribe. Advanced payment to offset the grief he knew he was about to get. At least they’d be laughing at him with satisfied stomachs.

Alex ignored the suspicious glances that flashed between his team members like some kind of semaphore.

“What’s up now then, boss? Don’t tell me… We’ve got some fucking journalist ride-along?” That had come from his veteran sergeant, Higgs.

“Nah. That can’t be it, Sarge. That’s not worth bacon butties. It must be something much worse.” Detective Pete Harris looked thoughtful. “The Chief Inspector is up the duff and the boss is responsible.” That got a few snorts of laughter in response.

“The Chief may come across as holier than thou, Pete, but even she couldn’t manage the Immaculate Conception,” Alex retorted from his perch on the edge of a desk. He let the banter continue for a minute or two then broke in, “Can it, you lot. Even if I were inclined to switch teams, which I’m not, Chief Inspector Mary Sissons would hardly be my first port of call. She’s old enough to be my fucking mother!”

His team dissolved into guffaws of laughter and Alex smiled. “It saddens me deeply that I can’t do something nice for you without aspersions of guilt being cast on my character. I’m deeply hurt.”

The sergeant slurped his coffee. “The last time you bought us breakfast, guv, you told us the overtime budget had been cut. You can’t blame us for being suspicious. Besides, we’re detectives. We’re supposed to read between the lines of every situation and you did say you had a plan.”

Alex gave a wry smile. “Well, that is true. However, this morning has absolutely nothing to do with overtime, I promise. I’ve been doing some thinking…”

That brought another chorus of groans and sarcastic comments.

Alex rolled his eyes. “Yes, it does occasionally happen. Even to senior officers. Anyway, I’ve decided to take a new tack with this investigation. We are going to try something different. We need bait.” He paused to let that sink in.

“What do you mean by bait, exactly?” Phil Cole, the youngest member of his team other than Alex himself fanned his face anxiously then loosened his tie and undid the button at his collar.

“Don’t worry, Phil, your arse is safe. You’re too old and nowhere near pretty enough for our resident psychopath.” Cole looked relieved rather than insulted and chewed on his sandwich. “So if not me, then who?”

Alex steeled himself. “I never thought I’d hear myself saying this to you lot”—he cast an eye over the four men that made up his team—“but I want you to find me a boyfriend.”

Share what you thought about Investigating Love Box Set and earn reward points.