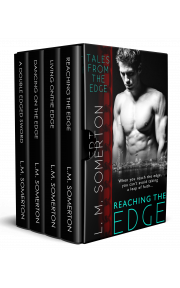 Tales from The Edge: Part One Box Set

The Tales from The Edge series: Part One

When you reach the edge, you can't avoid taking a leap of faith.

A social call to The Underground, a club owned by an old friend, turns into much more when Joe is introduced to a prospective sub. Falling hard for the boy's tumbling blonde curls, huge blue eyes and desperate need for protection, Joe carefully coaxes him out of his shell. By the end of an intense weekend, unbreakable bonds have been forged and Joe is well on the way to becoming Olly's Master.

Joe knows that there is trauma in Olly's past, but it is not until his professional and private lives collide that Joe discovers the truth. He knows he shouldn't have let Olly out of his sight but it's too late—Olly's old Master is back on the scene and he's not in the mood to forgive and forget.

With Olly's life on the line, Joe risks everything to save him. Has Joe found his perfect submissive only to lose him in a horrible twist of fate, or will love win the day? They've reached the edge and there's no avoiding a leap of faith.

Living on the Edge

Sometimes it takes willpower to resist temptation but courage to give in.

Aiden Keller is a brilliant and intriguing young man. When he's convicted of hacking, his sentence takes him to The Edge, a high-end corporate training company with a mysterious sideline. There he is given into the custody of its owner, the enigmatic and demanding Heath Anders, and his business partner Joe Dexter.

From the moment Heath takes charge of Aiden he recognises the boy's submissive nature, even though it is well hidden beneath a veneer of snarky attitude. But for twelve months, Aiden will be his responsibility and Heath cannot allow himself to get involved whilst the boy is obliged to obey him.

Aiden settles into his new life with the help of Olly, Joe's pretty, submissive boyfriend, who is very perceptive when it comes to noticing the sparks of attraction flying between Aiden and Heath. Slowly and gently, he teaches Aiden that submission is not a weakness and to accept his desire to be dominated.

Unable to resist, Heath starts to test Aiden's willingness to be obedient, and against all the odds, love (and lust) start to bloom. Aiden, however, is not quite what he seems and his past is about to endanger all their lives.

Dancing on the Edge

Life is a dance. Whether you lead or follow, the passion of it should sweep you away.

Carey and Alistair have the kind of relationship that is the envy of their friends. Carey is an old-fashioned Dom who appreciates quiet obedience. Alistair is a sub who is comfortable in his skin and finds peace in his submission. Needless to say, their happiness is too good to last.

When Alistair's powerful father chooses his reputation over his son, all hell is let loose. Forcibly committed to a clinic for reversion therapy, Alistair can only hope that his lover will save him.

Carey calls on his friends from The Edge and they band together not just to rescue Alistair but also to protect his future. They've all flirted with danger in the past—but friendship is worth any risk. As the tension mounts and the stakes get higher, new bonds are forged but will Carey and Alistair's love survive?

How do you stay standing when the ground is torn from beneath your feet?

Becket and Christian are taking the first, tentative steps towards the committed D/s relationship they both crave when the world literally explodes around them. In a frightening reversal of roles, Becket has to deal with his own vulnerability and Christian must find the strength to take care of his Dom. With the help of their friends at The Edge, the two men come to realise that dominance and submission cannot be switched on and off.

Events that could have ended in tragedy provide the catalyst that affirms their trust in each other, but there are still questions to answer. Is the safe path always the right one to take? Is control simply a state of mind?

One thing’s for certain, life’s too short for compromise.

Reader Advisory: These books containthe pushing of boundaries and edging, kidnap, forceful imprisonment and forms of visual torture along with scenes of prolonged physical torture. They also contains characters with extreme prejudiced views. There are references to past rape and current PTSD, non-consensual plot elements including sexual assault.

"Alyson, I realise that I’m a clinical psychologist, but my specialism, as you well know, is criminal psychology. What on earth makes you think I can help this boy?"

"He’s not a boy, Joe, he’s a young man. He’s been through the kind of trauma that would turn most of us into gibbering wrecks, and survived, against all the odds. But I can’t get him to trust anyone enough that they can help him. He’s so closed down that he’s barely functioning."

"What exactly does that mean?"

"He looks after himself on a basic level. He eats. He keeps clean. He does housework. But he hasn’t been able to return to work and he has horrific nightmares. I don’t think he’s slept properly in months."

"What aren’t you telling me? There has to be something..."

"Just read his file. I’ll buy you dinner." The slightly wheedling tone grated on Joe’s nerves and he found himself agreeing just to get the annoying woman off the phone.

"Fine. Send it over and I’ll take a look, but that’s it, Alyson. I’m not promising anything."

He could feel her triumph reverberating through the handset as he replaced the phone in its cradle. He’d known Alyson Bell for several years. She was well respected and, despite the fact that he didn’t like her all that much, he knew she was good at her job. She had referred patients to him in the past when the skills of her colleagues at the private clinic where she worked had been exhausted. He had no illusions about being the call of last resort. It was that very thing that intrigued him—the challenge of trying to help people whom everyone else had given up on.

It was Friday evening and he was looking forward to the first free weekend he’d had in nearly two months. He picked up the phone again and dialled his business partner and best friend.

He smiled as he listened to Heath relay information about the week’s courses at The Edge, the corporate training company they ran together. He divided his time between his growing private practice and what was turning into a very successful business venture.

"I’ll be up next week as planned. Enjoy the weekend off." Joe tried not to sound too jealous.

Heath chuckled knowingly. "You don’t sound very sincere, my friend. What will you be getting up to?"

Joe was still trying to decide what to do with his own free time. "Not sure. Think I might put in an appearance at The Underground tonight."

He fiddled with a pen on the desk, then dropped it as Heath made a couple of very detailed suggestions as to what a night at The Underground might offer.

"It’s been so long since I played, I think I may have forgotten how to use one of those!"

A snort of disbelief sounded down the line, followed by a few caustic comments.

"I’m just going for a quiet drink and maybe a little innocent voyeurism. It won’t do the business any harm if I put in an appearance, anyway."

He held the phone away from his ear slightly and waited for the laughter to subside.

"Fine. Have your fun. I know that 'just watching' has never been my thing, but I’m fed up of all those doe-eyed submissives who just want to play for a night, then go back to their safe little worlds. I’m pushing thirty, Heath. I want something more and he has to be out there somewhere."

He tilted his chair back and smiled at the kinder words that followed.

"All right, all right! Twenty- eight isn’t thirty! Yes, I will have a good time. Yes, I will be careful and no, I will not be fucking telling you about it in the morning. Goodnight, Heath."

Heath had drawn every eye in the place as he had strolled across the room, black leather clinging to long legs and a gorgeous arse, his body draped in a filmy silver-grey shirt. There’d been a few disappointed sighs as it had become obvious that this was not a new, tender submissive but a confident, young Dominant who would provide dangerous competition for all of them.

He’d ordered water with a twist of lime, glanced at Joe’s fruity concoction with a smirk and introduced himself. "Heath Anders. I need someone to teach me and I’m told you’re the best."

It had gone from there, and Joe had enjoyed every moment of showing his willing student what it meant to be submissive, and how to be the best possible Dominant. Friendship had led to partnership and the development of The Edge into something more than just a corporate training company. The Underground had provided them with a number of excellent clients and he was proud of the fact that they were making an active contribution to making their world safer and more respectful of others’ needs.

Share what you thought about Tales from The Edge: Part One Box Set and earn reward points.