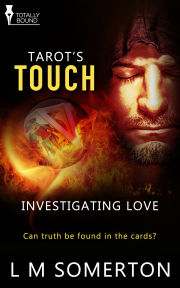 Book 3 in the Investigating Love series

Can truth be found in the cards?

DI Alex Courtney and his lover, DC Conor Trethuan are under enormous pressure as their team investigates an arson case and a murder.

It soon becomes apparent that the two cases are linked and the race is on to find a vicious killer. A tarot card is placed with the first victim and the detectives are left to interpret the clues it provides. When Conor receives a note from the killer making reference to another card, the whole team is shaken. Their worst fears are realized when a second body is discovered, along with another tarot card.

Conor suspects he has been followed then a hit and run leaves him injured. Alex wants nothing more than to wrap his lover up in cotton wool and protect him from the world. But is Conor the killer’s target or just a pawn in a much more sinister game? As the clues come together, it seems that the motive for murder might be revenge.

PC Matt Naylor hunched his broad shoulders against the cold and tried, unsuccessfully, to ignore the trickle of icy water, which had breached the collar of his police-issue waterproof and was making its way down his neck. He now understood what ‘soaked to the skin’ really meant. Water dripped from his long nose, soaked the bottom of his trousers all the way to his knees, and he was fairly convinced that his Y-fronts were making sucking noises as they adhered to the clammy skin of his arse. He looked up into the amber glow of a street lamp and watched the rain against the light. It was coming down thick and heavy. The gutters were running with swollen streams and every indentation in the pavement had turned into a shoe-soaking puddle.

“Bloody English summers,” Matt complained to no one in particular. Not that there was anyone for him to complain to. He peered at the luminous face of his watch, which told him it was three a.m. He always thought it a dead time—no longer qualifying as night but still too early to be defined as morning.

“And they call police work a fucking vocation. Still, only three hours to go until the end of this shift.”

Matt was very tempted to dive into an all-night café for a steaming mug of tea and a bacon buttie or just huddle in a nice, dry doorway. Nobody would know, or care, if he took a break from the appalling conditions, but Matt would know, and he did care. He could admit that he was still doggedly committed to his beat—he put it down to his age, as did his more seasoned colleagues.

He carried on down the street, every step creating a new splash. He took the long, measured strides of someone used to covering a lot of ground while conserving his energy. He scanned the street continually, staying alert to anything suspicious. Movement in a shop doorway attracted his attention but it was just a fox snuffling into some discarded food. The bedraggled animal glared at him suspiciously then went back to rooting around in its prize. It looked like discarded fish and chip wrappings and Matt had a sudden craving for fresh, hot chips, sprinkled with salt and liberally doused with vinegar. No chance of that dream coming true. Matt pushed aside his melancholy as he left the fox to its meal. Even the young guy that ran the kebab van, fondly named ‘Greasy’s’ by the local college students, had packed up early and headed home. The pubs and clubs had closed. Anyone with an ounce of common sense was long since tucked up in bed. Matt hadn’t even had the momentary entertainment of dealing with a few stray, inebriated clubbers. The weather was a much more effective deterrent to drunken brawling than he would ever be.

Matt glanced into the mouth of a dingy alley, squinting into the blackness. It separated two buildings, but wasn’t wide enough to take a car. Weeds growing through cracks in the tarmac testified to its lack of use. Someone had taken advantage of the neglected spot and left a heap of rubbish in the middle of the narrow lane. “Bloody fly tippers,” Matt muttered. “Is it really that much of an effort to take stuff to the recycling center?” He went to move on but something made him pause. A little, niggling itch at the edge of his mind. He pulled a flashlight from his belt and broke the inky blackness of the alley with its powerful beam. The pile wasn’t the usual detritus left by tippers. It looked like a ripped tarpaulin, maybe from a nearby shop awning. Matt rolled the beam of light from his torch around dripping fire escapes and overflowing bins before targeting the tarpaulin again. Something pale showed through a rough tear in the fabric. Matt’s stomach contracted and he placed a hand on his baton before taking a few steps closer. The scurry of a rat behind a nearby bin nearly gave him a heart attack and he laughed nervously at his own jumpiness.

Bending a knee, he stooped, lifted a corner of the tarp then directed his torch underneath it. Sightless open eyes stared back at him. Matt gave a very unmanly yelp and fell backward onto his arse, vaguely registering the water that immediately soaked through his trousers. He scrambled away from the tarpaulin, scraping his palms on the rough concrete. His heart pounded and every hair on his body seemed to be standing on end. He clambered hastily to his feet and backed up against the nearest wall, taking jerky glances all around, half expecting someone or something to jump out at him. He fumbled for his radio with shaking hands then took a couple of calming deep breaths before calling in the incident. He tried not to sound too panicked. It wouldn’t do his reputation at the station any good at all if it got around that he had freaked out at the site of a dead body.

“Dispatch this is forty-two, I have a DB, possible murder vic, alley off the High Street between the pound shop and Ladbrokes. I’ll need the SOCO and CID. Over.”

His radio hissed and crackled. “Acknowledged, forty-two. Secure the scene. Back-up will be with you shortly.”

“Thanks, Dispatch. Who’s on call?”

A brief, crackly pause followed, and Matt could picture the duty sergeant checking his clipboard for rostered on-call staff.

“That would be Inspector Courtney, forty-two. I’ll give him your regards when I haul him out of bed.”

Matt rolled his eyes—anyone would think it was his fault that the town center was littered with dead bodies.

“We are here to serve,” came the deadpan response. “Over and out.”

Knowing that the full might and organizational resources of Avon and Somerset Police had now been nudged into action, Matt felt calmer. He’d managed not to sound like an idiot on the radio, even though this was his first corpse. Regardless of the fact that he’d only had a glimpse of the body, he had to admit he felt shaken and in a way, he was glad. It would have been a hell of a lot weirder to have no reaction at all.

“Secure the scene he says. Secure it from whom? And what the heck with? It’s not as if I have reels of crime scene tape stuffed in my pockets.” He looked around but there was no sign of another living being. Even the rat had thought better of his foraging ground and disappeared. The alley opened into the High Street at one end and at the other turned into the lane that ran the full length of the road. Matt knew that the lane gave access to staff car parks and bin cupboards belonging to the shops. The entire area would have to be searched, but there was little he could do on his own. He wasn’t about to go poking around and disturbing any evidence that might be present, that was a sure-fire way of getting himself allocated to traffic duty for a few months.

Time crawled on but it was still early. It was highly unlikely that anyone would enter the crime scene from the rear of the alley, so Matt walked back to the High Street and found a sheltered spot where he could keep a look out in both directions. The rain seemed to be easing a little and Matt fancied that the darkness was shifting to gray. Dawn was on its way. It wasn’t long before the flash of blue lights lightened the gloom even more and eased the tension in Matt’s shoulders.

Reviewed by 3 Chicks After Dark

The ins and outs of this case is very captivating and keeps the tension revved up during Tarot’s Touch. Nothing is what is seems with this case and the intended target is even more of a my...

Share what you thought about Tarot's Touch and earn reward points.

Writing Tarot’s Touch gave me a great excuse for researching the history of the cards – a subject I’ve always been fascinated by. Playing cards were in eastern culture as early as the 10th century however these eastern cards were a lot different to those found in Europe. The name ‘Tarot’ itself has been described as Egyptian, Hebrew, Latin, and Italian. It is most likely that the word used to describe the cards has Italian origins. The Italian word for cards is ‘Tarocchi’ which comes from the Valley of Taro River north of Italy. This is where some believe the cards originated in the 15th century.