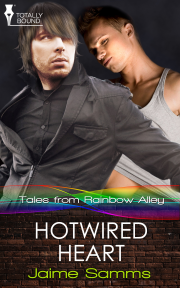 Book 1 in the Tales from Rainbow Alley series

A good car thief needs sixty seconds, but grand theft heart might take even less time than that.

Freedom and trust; opposite sides of the same coin that could give expert car thief, Marky, the win he's looking for. Little does he know escaping his gang ties will lead him through heartbreak and into cuffs he hadn't even thought to watch out for.

Now he can trust the powerful man who wants to help, or he can keep running. It all depends on how much he values his freedom, and whether or not Roland has managed the impossible; hijacking Marky's carefully guarded heart.

Gig sighed. "Now? Marky, we all know you’re fast." He shifted his weight to one foot with a quick glance around the deserted car park. "Just hurry up and hotwire the damn thing."

"Get your watch out, Gig." Marky plied his magic on the car, and by the time Gig looked up from setting his watch, the passenger door swung open. Marky grinned at him from his usurped place behind the wheel. "Get in, slowpoke!"

Gig made a face, slipped into the car, and closed the door. "This is nice!" His long, slim fingers caressed the dash, slid under the visor and along the arm rest.

Marky shivered, watching the gentle touch. "Ready?" He gunned the engine, streaking out into traffic before Gig could tell him not to drive like a maniac, or make any more loving gestures over the interior.

Mercedes safely inserted into the flow of traffic, Marky glanced over at Gig. "Record time, yeah?"

"Oh, c’mon, sexy." Marky slapped Gig’s thigh, his hand lingering until Gig brushed it away. He moved it back to the wheel, focused on the traffic as Gig fiddled at the glove compartment, which proved to be locked, and flipped the visor down.

"What’s this?" He pulled a slim, silvery wrist wrap out of the visor pocket. "Says Joe...Picone and...something...holographic. Not enough light." He slapped the band on Marky’s wrist and it snapped into place.

Marky’s hands began to ache from his grip on the wheel. "What?"

"Had." When they’d been together, he didn’t bother to add. His body language, tight against the passenger door, said it all.

Marky pulled into an alley, parked in a cross-hatching of shadows under a fire escape and killed the engine. Gig had his fingers curled around the door handle, ready to bolt.

Marky leant over and peered out of Gig’s window.

"We’re early." Marky glanced back out the back window. "There should be people on the corner."

"Hustlers." Gig snorted. "Someone you were planning on meeting?"

Marky frowned. Once. It had happened once. "Point is," he snarled, "there’s no one there." He turned to Gig, pointed to the door. "Get out. Go down the alley, I’ll take the street. Anyone says anything to you, run." Marky grinned but it was strained this time, and the strain showed on Gig’s face, too. "We’ll meet at the usual place."

"You said it would be okay!"

"This job was supposed—"

"Gig!" Gig jumped, and the hand that had been gripping the door handle in a tight fist jerked. "The longer we sit here... Please. Get out and walk away."

Gig nodded, slipped out into the shadows, and headed for the street. Marky cursed, but shouting after him would be too dangerous. Gig was almost around the corner, out of sight when the pop sounded. Marky froze half way out of the door. He’d heard that before. It didn’t sound right this time, either, didn’t sound big enough or loud enough, but it was enough. He turned his head in time to see Gig hit the ground.

This short story starts off with a bang, not slowing down from start to finish. From grand theft auto to the shooting that killed Marky’s friend all within the first chapter. This grabbed me and wo...

...an interesting story...fast-paced action, throwing the reader right into the middle of things...

Share what you thought about Hotwired Heart and earn reward points.