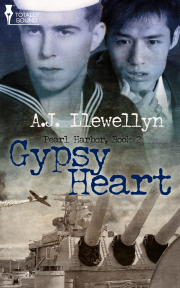 Book 2 in the Pearl Harbor series

Tinder McCartney thought he left behind his life as a gay male prostitute but soon learns returning to his old life may be the only way to save the man he loves…Tinder McCartney and his lover, Jason Qui, are adjusting to life in war-torn Hawaii following the attack on Pearl Harbor. Settling at first in Maui with Tinder's father, they go back to Honolulu to meet with members of the new military government regarding their plans to blow up a major access road in Lahaina that would leave the islanders in Maui stranded and without access to much-needed shipments coming into the island.

Back in Honolulu, Tinder and Jason are dismayed to see how much their beloved home has changed in just a few short weeks. Jason accepts a dangerous sea mission feeling that as a Chinese immigrant, he needs to prove his loyalty to the US. He and the crew of the ship disappear, and are presumed to have been taken by Japanese forces.

Tinder must decide what to do to help his lover. When presented with the opportunity to return to his old way of life in exchange for information that will help him rescue his lover, he must decide how far he is willing to go to heal his gypsy heart and save the man he loves…

I watched Linda, my father’s wife, sobbing as she filled the bathtub with water. Not for any of us to bathe, but in case our water supply was cut off. I could hear the incessant babble of the radio in the living room, as well as my father and my lover talking in low, worried tones.

We’d just heard the latest rumours were that the islands’ waterlines could be poisoned.

“Sometimes I wish we didn’t have to listen to the news,” Linda said. “Sometimes I just want to forget all this.” She shot a vicious glance out the door in my father’s direction.

“And he wants to stay here.”

I was bewildered. She’d been angry for days that my father hadn’t caved in to her demands to travel to Honolulu and get themselves squeezed onto the special-evacuation ship bound for San Francisco, the first one since Pearl Harbor’s bombing.

Linda—I couldn’t call her ‘Mom’ even though my father wanted me to—leant back on her haunches and wiped her teary eyes with the back of her hands.

None of us signed up for this, I wanted to say, but didn’t.

As usual, I had no response, no words of comfort for her. She’d been sleeping with my father when he was married to my mother. As she lay dying in bed of cancer, my father’s affections had transferred over to Linda. Once she’d passed, they didn’t even observe a respectable period of mourning. At the first hint of war, they’d escaped Honolulu and the busy life there for slower-paced Maui. They’d had grand plans...and then Pearl Harbor was attacked.

We were now at war with Japan. Linda still seemed to be in shock.

It had been thirteen days since the horrific bombing of Pearl Harbor. My father had called and begged me and my lover, Jason Qui, to come to Maui. We’d arrived by boat a few days before and I was surprised by how badly Linda was handling her new circumstances. Things weren’t easy for any of us, but we were, I felt, among the lucky ones.

Though Maui was an island away from Oahu, the threat of a new Japanese attack was always present. Here she was at seven o’clock in the morning, running water into the tub in case we needed it for survival.

“All those lucky people leaving,” she said.

I’d seen the photographs in the newspapers of screaming families rushing to get off the island. I’d even recognised a few of my former Hotel Street co-workers. Me? I’m an island guy. I’m in it for the long haul.

I pulled back the black curtain that was nailed over the window each night.

All our evening meals were served in the bathroom these days because its window was the only one that could be blacked out, so I was comfortable sitting in there with her.

I sat on the toilet, lid down, trying to be chummy and reassuring.

“Well, it’s just a precaution,” I reminded her. “We haven’t been poisoned yet.”

She gave me a fierce glare.

“Just a precaution,” she mimicked.

I said nothing. I knew she hated her new part-time job at the post office, but with all the able-bodied men being put to work in shipyards, supply depots and other essential civilian positions, she and all the other local women were being asked to pitch in.

The sugar mills, one of Maui’s biggest industries, had temporarily shut down, their workers encouraged to join the military. They either enlisted or worked on various local projects such as digging holes for the new bomb shelters as mandated by our ruling military government. Everybody was put to good use.

She got up and walked into the living room. I followed her. She picked up one of the gas masks that had been brought to us the day before by Army officers sent from the US military bases in Honolulu. There was talk of them setting up an Army base right here in Wailuku. They had told us we were supposed to carry our gas masks everywhere. She looked at the thing with total disgust, dropping it back on the sideboard.

Linda looked out of the windows and up at the sky. I wondered what she dreamt about each night. I dreamt of Oahu and I thought about my beloved island home incessantly during the day. It was hard not to, since Honolulu, its main city, and the devastating attack on Pearl Harbor were still on everyone’s minds.

I liked the characters a good deal...I recommend this as it's an interesting read about a culture and lifestyle that is quite alien to many of us, and a part of Hawaiian life that Hollywood isn't...

Share what you thought about Gypsy Heart and earn reward points.