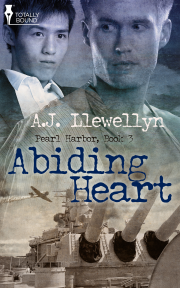 Book 3 in the Pearl Harbor series

Tinder and Jason are back in Honolulu, determined to face the future…but an unexpected friend from Tinder's Hotel Street days turns their lives upside down.

Now that Jason is home, safe from his horrific mission aboard the SS Malama, he and Tinder once again return to Honolulu to help in the rebuilding of Pearl Harbor. Jason, who faces a military tribunal on the fate of the cargo ship's lost crew members, suffers from traumatic nightmares as a result of his ordeal. Tinder, determined to nurture and protect his lover, is devastated when the truth of the crew's capture and Jason's dramatic escape is revealed.

Determined to face the future with renewed determination and courage, the two men also soon learn that fate has some other new surprises in store for them. In the ensuing months of WWII Honolulu, Jason and Tinder grow closer and closer in spite of hate—and help—from unexpected quarters, their abiding hearts rediscover the meaning of aloha.

Reader Advisory: This book is best read in sequence as part of a series and contains a discussion of off-screen rape and torture.

I lay in bed, listening for my lover’s footfall. It was a little before seven o’clock in the morning and he’d been gone almost an hour. I wrestled with my desire to give him a little more time before I charged off looking for him. I let out a breath. I hadn’t been aware that I’d been holding it, not really, but I worried each time he was away from me. I never said anything, but I felt my fears were reasonable considering that he had been captured by Japanese forces at sea just a few short weeks ago.

I kept giving myself reasons to stay in bed, keeping it warm for him, just like he’d asked me to. I held the pillow that contained his scent—ylang ylang and sandalwood. I gave myself up to the sweet, soothing sounds of The Andrews Sisters singing I’ll Be With You In Apple Blossom Time. I wanted to be with Jason all the time. I entertained myself by imagining what I would do to him when he came home.

The lush, yet breezy harmonies relaxed me. I had almost drifted off when my lover, who’d had a rough night’s sleep, walked back into our little Chinatown studio.

He gazed at me the way he always did lately, as though he couldn’t believe he was with me, that I was real. I saw the emotions crossing his face as I smiled, holding my arms out to him. He dropped his gas mask on the bedside table. The music stopped and the radio announcer read off the latest news bulletin.

“All citizens be alert. There will be fines issued to anyone seen without their gas masks—”

Music was fine. Constant, negative news was hard to take, especially when war bulletins came in each and every minute. I understood how he felt. He was weary. Bone weary. I was his respite.

I leaned over my side of the bed.

“Let me find some music,” I said. I fiddled with the dials. We’d picked up the astounding 1937 Deforest Crosley tube radio and twenty-three-inch tall cabinet for the princely sum of three dollars at one of the many yard sales that had sprung up around the islands over the last few weeks. With families leaving Hawaii in droves, they were desperate to offload the things they thought they couldn’t ship back to the mainland. It was in immaculate condition and the sound quality was superb. We liked to turn the radio’s ‘magic eye’ and find our favourite music as we lay in bed. We adored making love to Glenn Miller, Artie Shaw and The Andrews Sisters. For the minutes we listened to their lovely songs, the world was a beautiful, peaceful place again…

We had a fully furnished home in Waikiki, but I had turned it over to the military government as a gesture of goodwill whilst my lover had been on a clandestine mission for our country. Jason still hadn’t quite forgiven me, but I had taken out some of his favourite antiques, his clothes, books—and a box of booze—so we had everything we needed.

I so loved the little studio he owned in a back alley off Maunakea Avenue. We’d managed to pick up some wonderful pieces of furniture and kitchen utensils for it. Jason liked to joke that we could hardly move because we had so much stuff, but I found it hard to walk past these frantic families without purchasing something. I loved that our new little home was big enough just for the two of us. And I loved living in Chinatown. In the months before he met me, the studio had been Jason’s little crash pad. When he worked late at his bank, he would spend a few hours here then return to work. Now it was our love nest. Chinatown was our world. People accepted us…no, they embraced us.

No music. Just news. And none of it good.

“Turn it off, baby, I want to concentrate on you.”

This time I did as he asked. I turned back to him. He had a lustful gleam in his eye as he kicked off his shoes, then dropped his trousers and shirt on the floor. As usual I got a thrill seeing him naked.

“Get in here, you.” I held out my arms again and he slipped back under the covers with me. He smelt faintly of dry cleaner fluid.

A whole week we’d been back in Waikiki, and we’d thrown ourselves into our new projects. Jason had resumed running his family’s bank here in Chinatown. He’d given loans to several local businessmen to take over stores that had been abandoned by people anxious to leave the islands, thanks to the attack on Pearl Harbor.

Jason himself had purchased two laundries and a dry cleaner. Together, we had given several friends money in order to plant and harvest fruit and vegetables at their homes—Victory Gardens that had started cropping up on the expansive windward side of the island to combat chronic food shortages.

Hopeful families in Waikiki had started planting in allotted spaces in public parks, and we had given them money, too. We hoped this positive war effort would be the antidote to the drunken, debauched honky-tonk bars that sold lethal imitation gin and watered-down drinks to the armed forces streaming into the islands.

He had left our bed at the crack of dawn to open all three of his businesses. He would return in a couple of hours to keep an eye on things. Restaurants, laundries and dry cleaners were the unexpected boom industries, thanks to the war effort. But right now, my job was Jason.

He snuggled in my arms, pressing kisses on my throat and neck. His cock fell against my warm thigh. Hmmm…it needed some attention. He moved his face up to kiss me.

“I love you,” he said. I loved hearing it. I never got tired of hearing it, but I worried that he still hadn’t told me what had happened to him out in the ocean when the Japanese forces seized his ship. Jason was understandably traumatised, but if he couldn’t tell me, then how in the world was he going to tell the military tribunal next week?

My hands moved down his body. He shivered as the back of my hand grazed his leaking cock head. He was the most responsive lover I’d ever had. He lay back on his pillow and grabbed my head, threading his long fingers through my blond hair.

“Oh, Tinder.” Our lips met, our tongues dancing against one another. My arm brushed against his cock. I wanted to suck it. As far as I was concerned only two things should ever touch his cock. My mouth and my ass.

He wouldn’t let go of me. Sometimes—and this was only since we’d returned to Waikiki from rural Maui, when he had bad dreams and then plunged into the world of strangers—he seemed afraid. He never expressed this to me. It was just my feeling. As I kissed him, allowing my mouth to linger over his chin and down his throat, I decided that from now on, no matter what he said, I would accompany him wherever he had to go. My name came to his lips again as I licked a trail down his skinny chest. I loved every inch of his body. And he knew it.

This third volume of the ‘Pearl Harbor’ series totally stunned me. Not only was it great to revisit Tinder and Jason, the storyline offered just as much tension as the last book’s. The details about...

If you like to read about history in a way that makes you feel you're right there, if historical details fascinate you as much as the emotions of the people who were involved in those events, and...

Share what you thought about Abiding Heart and earn reward points.