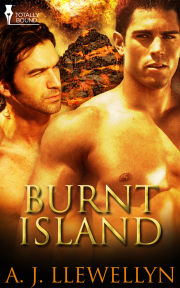 Leo Gannet takes an unusual assignment in a tiny, remote island in the Cyclades with darkness, danger…and unbelievable passion lurking in its beautiful blue waters.

With only three hundred inhabitants and four miles to cover, Leo worries about pulling off his mission. He soon discovers he's got bigger problems: Thane Covey is the sexiest man he's ever seen. And he's not alone. Leo soon becomes insanely jealous, then very worried.

To top it off, Thane also seems to have somebody else's attention…a hitman's.

Reader Advisory: This story has been previously released as part of the Sins of Summer anthology by Total-E-Bound

It began with the dog walking around in circles and ended with me on a plane to Athens, Greece, tracking my father's boyfriend. Yeah, you heard it right. Just when my dog, Jezebel, needed me most, I couldn't come up with the funds to treat her sudden onset of vestibular disease. A call to my dad for a loan got me an unwanted job, but it also meant the money I desperately needed to take care of my best friend in the whole wide world.

My vet is an awesome guy. He's not the type to chisel his human clients for expensive tests, but when my Australian shepherd, Jez, started tilting her head, scratching her ear, walking in circles and falling down, Dr Lang warned me it might be very serious. He couldn't tell if her vestibular problem was because of an ear infection or a brain tumour. This meant a slew of tests. In my work as a private eye, I have good months and bad months. Lately they've all been bloody awful. In this tough economy, people have been taking matters into their own hands, following cheating spouses themselves…or just turning a blind eye to their shenanigans.

No matter how many times I tell a love-sick spouse that you get what you pay for, a few have ignored me, with catastrophic results. As much as any guy wants to know if his wife is diddling another guy, nobody really wants to see it for themselves. And then there is the matter of getting caught. There isn't a person alive who looks attractive acting like a stalker…

But enough about that. I was frightened enough about Jez having a disease I couldn't spell, let alone treat. New York was bracing itself for some sweltering, triple—digit summer heat, and my A/C was on the fritz. I'd have to get that repaired as well if I was going to keep Jezebel comfy.

When I called him for a loan, my father, Leo Gannet Sr, was unusually willing to pay for the initial battery of tests. He gave Dr Lang's office manager his credit card details right over the phone. I should have been suspicious, but I wasn't until he said, "Leo, we need to meet and discuss terms."

As I grabbed a taxi to meet him for coffee on Manhattan's lower east side, I watched the day's heat shimmer in waves from the scorching bitumen. I bounced along on the uncomfortable, macramé-covered back seat, the strong smell of curry and rice permeating the cab. I held on for dear life, worried the back door of the decrepit vehicle would fling open, tossing me to the kerb. As we slammed to a halt outside Bluestockings Café, I wondered if my father's terms meant a repayment plan I'd have to make—with interest.

Dad waited for me inside Bluestockings, an activist café and bookstore he would never have frequented when he was straight. A contract-law attorney, he'd always been the epitome of Brooks Brothers couture. Now he was gay, he dressed like a frickin' rich, hippie weirdo with tie-dyed T-shirts and hemp pants and gave free legal advice to old ladies selling organic produce. I noticed prayer beads lurking against his hairy chest and gem stone bracelets clinking on his wrists. I detected a strong whiff of patchouli incense when he threw his arms around me. Though I wanted my father to be happy, I wished he could have done it whilst maintaining a closer relationship with soap. He still looked distinguished…sort of. He needed a shave and a trim. He looked bleary-eyed and exhausted.

Holy cow. Had he been crying?

Dad hugged me like it had been weeks since we'd seen each other. Upon reflection, it had, so I let him hug me. He oohed and aahed over me.

"Leo, great haircut, son. Have you been working out?"

We both had the same chocolate brown hair that did whatever the hell it wanted, only his had started turning grey, probably from the stress of living a double life. Now he was out, he'd quit the weekly facials and manicures.

"I gotta be me," he kept saying. I just didn't know who the hell that was anymore.

He cupped my face in his hands and looked at me with eyes the same blue as my own.

Share what you thought about Burnt Island and earn reward points.