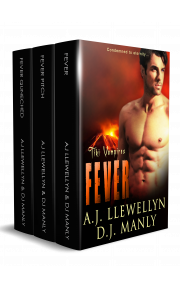 When Jepoi meets the man of his dreams, he has no way of knowing that Malakai is a fallen Hawaiian god condemned to eternity…as a vampire.

The pantheon of gods were displeased when Kane, one of their major gods, fell out with his lover Kanaloa, one of the ruling forces over the Hawaiian Islands. Condemned to an eternal earth-bound life as a shape-shifting vampire, Malakai has one chance to break the curse. He must never fall in love and he must never intervene in human problems.

All that goes astray when he meets Jepoi, a young male nurse working on the Big Island of Hawaii. Malakai falls for Jepoi and can't resist him, but then all hell literally breaks loose when Malakai saves Jepoi from ancient and deadly disease that returns to the fatal shores of Hawaii.

Malakai and Jepoi have infuriated the major Hawaiian god Kanaloa by falling in love. Malakai was once Kanaloa's lover, and after a nasty break-up, Kanaloa banished Malakai to eternity as a vampire on earth. Malakai loves Jepoi and yearns for a peaceful, mortal existence with his man, but Kanaloa is a sore loser. He's not about to lose the man he worships to a guy who just won't go away…so he abducts Jepoi and punishes him severely.

He turns Jepoi into a vampire, separating him from Malakai. Jepoi struggles to find his way as a Hawaiian vampire, learning what it's like for others of his kind in the islands.

When Malakai finds Jepoi, their passion reaches fever pitch. To punish them both, Kanaloa opens up all the gates of hell, unleashing long-dormant demons and monsters into the islands.

Can the pantheon of gods really control human emotions? Or can love really conquer all?

In the Tiki Vampires trilogy, everything we know about myth and magic explodes with the eruption of Kilauea Volcano on the Big Island of Hawaii. Though legend has it that the old gods departed the islands, they didn’t. Many have been condemned to lives as creatures of the night. Vampires, werewolves and other fabled creatures abound on the islands’ silky coastlines. For the fallen god Kane, life as the vampire Malakai was lonely and pointless before he met Jepoi, a young man who somehow pierces Malakai’s invisible armor.

Kaneloa, the Hawaiian god who condemned Malakai to his undead existence, punishes Malakai and Jepoi, trying to keep the two men apart. As the series unfolds, Malakai and Jepoi face seen and unseen foes. Old legends about the islands come back to life. Ancient crossroads like the City of Refuge spring back to existence as Jepoi and Malakai are forced to live apart, even though each wants the other. Will the gods or the humans win?

The volcanic eruption had taken everyone by surprise. Me, I saw it from the air flying back from taking a cardiac arrest patient to Honolulu. My flight partner, Jon, and I stared out of the window at the spectacular display, fire and angry molten lava shooting to the sky and back down to the sea.

"This isn’t a small one!" our pilot, Alex, shouted from the cockpit. He angled back around so we could get another look.

"Check that out!" Alex called out at the exact same moment Kilauea Volcano’s burning cauldron spewed fresh fire into the air. All three of us let out whoops of stunned excitement as fire accompanied the black river now moving fast along the trails that people normally walked.

Madame Pele, Goddess of the Volcanoes, was pissed about something.

In spite of the eruption, we were still able to land. Simple things like breathing and driving were a different story.

Jon and I had driven in my car to Hilo airport when we’d received the medical alert. He was too scared to head home with me.

Not only did I want to go home, I wanted to get close to the fire. I’d never seen an eruption before though I’d hiked the volcano numerous times.

In the haze of the vog, the thick volcanic fog enveloping this side of the island, I made slow progress. It was so hard to breathe I knew it had been a mistake to come out here. I should have waited.

I did not want to become one of my own airlifted patients, so I pulled over to the side of the road. Out of nowhere, a small animal appeared.

Wait. No. I peered through the front windshield. It looked like a man. Except he had no legs and he was wearing a strange fur coat.

I immediately got out of the car thinking he’d been hit. I was a nurse. What if he needed help?

When I jumped out and called, "Are you okay?" the man scurried away. Almost seemed to levitate.

I tried following him. The air smelled like rotten eggs. The sulfuric gases burned my eyes, particles of lava hardening on my skin, even my eyelashes. I was afraid the higher I went on that mountainous road, the more likely the lava was to envelop me, as it had countless trees in previous eruptions.

From somewhere above, I heard the whine of helicopter blades. A dog barking nearby. Legend has it that the Goddess Pele, when she assumes human form, is either a gorgeous, young raven-haired temptress, or an elderly, frail old woman. And she is often accompanied by a small white dog.

Back towards Hilo, came the sound of ambulance sirens. I stopped and checked my cell phone. I had a signal but no text. I wasn’t required to leap into action. One more look around for the legless man and I’d get back to my car.

Then, out of the relentless smoke, a man appeared. Oh, my. He was handsome. Dark-haired.

"What are you doing out here?" I asked. Good God he was a specimen.

"I’m looking for a legless man."

"So how bad was the date, Jepoi?" Evelin asked as I stood beside her at the kitchen sink.

"Hmm?" I came back to earth with a soft landing. Just thinking about the moment I’d met Malakai twenty-four hours ago made me feel all gooey inside.

"You’ve got a funny look on your face," she said.

"It wasn’t bad. Far from it. In fact, it was the best first date I’ve ever had."

"I was kidding. I heard the furtive making out that went on all night. Made me want to take a cold shower. And smoke a cigarette. And I don’t even smoke!"

Evelin made me laugh.

"Of course, being a Libra, I couldn’t decide which to do first. The shower or the smoke so I gave up and just…diddled myself in bed."

Oh, too much information. I tried to keep busy, shelling the peas we’d just pulled from the garden. It was a little after seven a.m. and I hadn’t even been to bed yet. Not like me. Not like me at all.

I didn’t want to talk about Malakai. Not after the amazing date we’d had last night…when I’d done the unthinkable and spent all night in his arms on the back lanai cuddling and kissing him. I never did that on a first date… Come to think of it, I couldn’t remember the last time I’d spent all night just making out. And this, in spite of the thick vog that still clung to the air from Kilauea’s little crater party. In spite of the thirty mile distance, the smell, the tiny particles of lava that had continued to invade my skin, eyes, even my tongue.

Share what you thought about Tiki Vampires Box Set and earn reward points.