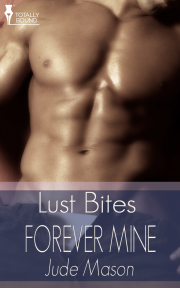 Jason Black has dreams. He's had them all his life. The only trouble with his dreams are they came during the day, while he was awake, and they came true.

Oh, and another thing, he sees a vampire, often. He'd seen the vampire bent over the body in an alley, and that's when his life really took a hard left.

You think Jason is crazy?

Most people do. He's not. But, he is in trouble and the only one who can save him is Ayden Devlin, the vampire. Together, they have to stop a drug lord and his henchmen from going on a killing spree.

Can the two men work together? Will Ayden's blood lust prove too big a problem to surmount? Will their feelings get in the way?

Jason Black looked up and down the litter-strewn alley. In the dim light from a distant street lamp, he couldn’t see anything out of the ordinary. But still, he was careful when he squatted and leaned over the crumpled body sprawled face down on the pavement.

He whispered, “Hey, mister,” urgently and reached for the side of the man’s neck. Two fingers pressed against the carotid artery felt for a pulse, and he wasn’t terribly surprised when he couldn’t find one. Again, he peered around, searching for clues or a weapon, anything that would tell him what had happened. When he pulled his hand away, his fingers were sticky as if he’d dipped them in honey.

Holding his hand up to the sparse light, he saw it wasn’t honey. Much too dark for that. “Damn,” he mumbled, realising it was blood.

He reached for the body again, laying his palm flat against the man’s cold, clammy forehead. Please, don’t leave me hanging, not this time. I need to know what happened.

The world around him faded, and he saw…two men fighting. They were here, in the alley. One towered over the other, slim and agile. His long, flowing, black hair looked so familiar it took his breath. The calf-length leather coat swirled around the man’s legs as he tossed his adversary around as if he were a ragdoll. The other man, the man he’d just found dead, wasn’t nearly as agile or muscular as the first and couldn’t break free. Twice, Jason saw the taller man slam the victim into the rough, brick wall with bone-jarring force. A gun appeared in the smaller man’s hand, and he aimed and fired the snub-nosed pistol. The slim man grunted; a pained expression filled his beautiful eyes as he looked right at Jason. That twinge of recognition flared.

No, not again. You’re not real.

Jason jerked back, shocked by what he’d seen and apprehensive of what further visions would bring. He closed his eyes and took a deep breath, again reaching to touch the cool corpse.

Forever mine is a pretty good short story and was well worth reading...I would recommend this short story to those who love vampire romances.

Share what you thought about Forever Mine and earn reward points.