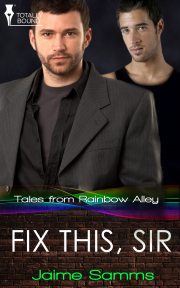 Book 3 in the Tales from Rainbow Alley series

It's always easier to run and hide than to face your problems. So what happens when you get your legs cut out from under you and running is impossible?

Jimmy's been hiding from his troubled past for a long time—in drugs, drink and dangerous sex. It's always been easy to find oblivion in the restraints of men who don't really care who he is or where he's come from. When tragedy puts him in a wheelchair and forces him to fix his legs—and his life—he's not so sure he has it in him to even try. Belligerence is the only weapon he has left.

Cliff is a physiotherapist with a big heart…and a dominant streak a mile wide. The instant Jimmy Phillips rolls into his clinic, he sees a submissive headed straight for self-destruction and every protective instinct kicks in. Ignoring the dangers of getting intimately involved with a client, Cliff takes Jimmy under his wing and pries under the broken man's guard. Getting behind the anger is a challenge the Dom in him just can't ignore.

What he finds is so much more than he bargained for. Now that he's reopened all of Jimmy's old wounds, he's not so sure he has what it takes to help his new submissive heal. All the control Cliff can muster can't hold Jimmy's crumbling world together, and now Cliff faces not just the loss of a sub, but his own fears that he was never worthy of Jimmy in the first place.

A slow trickle of moisture wended its way down through the light hairs on Jimmy’s back until he felt it wiggle its way between his butt cheeks. He didn’t shift to ease the tickle. He couldn’t. Another drop collected and slithered through his hair, etching a path across his scalp until it was free to slide down his nose. He could see it hover on the tip for a heartbeat, then he watched it fall and splat on the black rubber mat between his feet.

“You can’t just stand there forever.”

Jimmy glanced up at the sound of that pert little voice to glare at the pert little owner. “I can do whatever the fuck I please.” He wanted to tell her she wasn’t the boss of him, physiotherapist or not, but that was maybe slightly too childish, no matter how surly he was feeling.

“I know it’s difficult, Jimmy, but you want this. You know you do. And it’s going to take work.”

“Shut the fuck up.” He dropped his gaze again to stare at the glimmer of sweat on the mat because he couldn’t continue to watch the telltale flush of pink riding up her cheeks. His mouth ran on, smothering his better judgement in a torrent of uncontrolled bile. “You think after four months I don’t know how much fucking work this takes? You can stand there and tell me how hard it is. You have no idea what it’s like.” He lifted his head, forcing himself to glare at her and watch the destruction. “You’ve never had a day in your life where you had to remember you’ve got nothing left. You’ve had an easy ride—Mommy and Daddy paying for school, good grades, always knew what you wanted.”

Her smile slipped, but she pasted it back, stiff and meaningless. Her nostrils flared, and thin white lines of tension appeared around the edges.

The sharp male voice, slamming into his thoughts like a wrecking ball, cut off his tirade, wiped the insults he’d prepared right out of his head and left him sagging. The speaker was somewhere to his left and behind him. Turning enough to look at him would bring him dangerously close to tipping onto his ass. He dropped his head again. Another trickle of sweat dribbled down the side of his cheek.

“Callie, you can take five in my office.”

“Sure, Cliff.” She drew herself taller and disappeared around behind Jimmy without a word.

He didn’t dare try to turn to watch her. Partly, he didn’t want to see her boss’s face, and partly, he was afraid he’d lose his balance and fall over.

“Are you done?” Cliff sauntered around, and his sneakers came into view in front of Jimmy, close enough he could see without lifting his bowed head.

“I asked you a question.”

“And who the fuck are you that I should answer it?”

The tone of the man’s voice sent an involuntary shudder through Jimmy. Despite the pain in his legs and the unbelievable exhaustion that wouldn’t seem to go away, that tone reached into his gut and stirred it up. He tightened his fingers on the metal bars, his arms tensed. He lifted his head slightly. This wasn’t the time or the place to let his submissive tendencies show. Not when he was already helpless.

“I said, look at me.” Though Cliff’s voice actually dropped in volume, the command underlying it strengthened and ripped through Jimmy’s composure.

Shaking and angry, but fascinated anyway, he lifted his head.

Cliff was not a small man. He was likely as tall as Jimmy, and not very many people were. He was wide, too, thick arms and trunk-like legs giving him a massive appearance. Jimmy knew he’d lost a fair amount of weight in the months since Kane had hamstrung him, but even at his fittest, Cliff outweighed him by a good thirty pounds of muscle. Sandy brown hair dashed across the big man’s forehead, framing hazel eyes that took in every limp line Jimmy was presenting and gave no hint of what he thought about the sight.

Jimmy made a mostly useless attempt to pull himself up to his full height, but trusting his entire weight to his tired legs and traitorous knees hurt like a bitch. He didn’t manage to keep the grimace off of his face.

Cliff nodded. “Better. Now. I asked you a question. I’d like an answer.”

“You can’t…just order me around.” Jimmy’s protest dribbled into the space between them. Cliff absolutely could order him around and they both knew it. Still, it didn’t seem the appropriate way to proceed under the circumstances, and Jimmy frowned. “I’m a patient. Don’t you have some code?”

“I have a responsibility to my staff not to let the clients abuse them. Callie has been more than patient with you and your swearing and your outbursts. I doubt, at this point, you’d find another therapist willing to take you on.”

Jimmy hung his head. There was nothing he could say to defend his behaviour. He felt shakes and sweats coming on and wanted nothing more than to sit.

“Look at me, Jimmy.” Cliff’s voice had gone soft and low, but the edge of command spiralled around Jimmy’s will and broke it down.

He raised his head.

Share what you thought about Fix This, Sir PRINT and earn reward points.