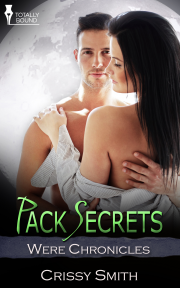 Book 12 in the Were Chronicles series

Alex Wilson enjoys his low-key life at his family ranch, spending hours with his horses and being surrounded by his family. He doesn’t know what he’s missing until Angel Salvatore storms into his life.

With the threat to the Pack and a new woman in his life, Alex finds himself struggling to take in all the changes. Shocked to his core when Angel declares them mates, he has no idea that isn’t even the biggest secret Angel will reveal.

Angel Salvatore is called to come to the aid of the Canyon Pack after rogue agents of her organization attacked. She has no clue that she’ll also find the one person meant to be hers. Not only does Angel have to track down the last three rogue agents, but she has a lot of explaining to do to her mate. Alex pushes her to lose control, which has her blurting out the one secret that no one knows.

Revealing the reason why he can’t scent her, and why she has impressive speed and outstanding strength, has the potential of destroying everything she’s ever wanted.

The strong fresh aroma of high-dollar coffee filled the kitchen as Alex Wilson went about brewing a pot. The last few days of having a house full of guests worrying over his best friend and other Pack mates had started taking a toll on him.

When his Alpha had first asked him to house their out-of-town company, Alex had figured it wouldn’t be too bad. Since his sister had recently mated with Max Lawson, the two spent most of their time in the guest house, leaving Alex alone. Even his younger brother was already married and had two boys.

Although he wasn’t opposed to the solitary existence, he’d found himself looking forward to socializing with others outside his immediate family.

He should have been more careful in what he wished for.

Not only were complete strangers staying in his spare bedrooms, but they’d also had to add guards to the property after Marcus Webb had been shot.

It was just the night before that the Alpha and others had found the man responsible for the attempted murder. They’d also found out that Emilio, the man accountable, worked for the same organization as Angelica Salvatore. Emilio was being held by the Guardians in one of his rooms, but his Alpha had assured Alex that Emilio posed no threat to his family.

Thinking about Angel reminded Alex why he needed to brew the coffee extra strong.

Ever since Angel had shown up on his doorstep with her brother and his closest friends, Alex hadn’t been able to stop thinking about her. He shouldn’t have been so damn hung up on some woman he didn’t know, who was obviously keeping many secrets.

Alex didn’t like drama and Angel appeared to be full of complications. She was also gorgeous, funny and mysterious. Fuck, he wanted to grab a handful of her black silky hair to yank her head back and plunder her mouth.

Cock more than half hard, Alex needed to calm down quickly before someone walked in.

Finally the beep indicating his morning beverage was ready sounded from the machine. Knowing everyone else would soon be up, he transferred the contents into a stainless-steel carafe before beginning another pot to brew.

As he picked up his favorite mug, the kitchen door swung open with a soft wisp of air. Alex didn’t even need to turn around to know who had joined him.

“Coffee?” he asked, already reaching for another cup.

Angel’s voice sent a shudder through his body. Fighting against the temptation for doing all the things he’d been dreaming about, Alex went about making her drink. “One sugar and a dash of creamer, right?”

Damn, damn, damn. He shrugged his shoulders. “I try to pay attention to my guests’ preferences,” he responded.

Her soft laughter came from right behind him. No longer was he only half hard. His erection now pushed against the zipper of his jeans.

Finishing stirring in the condiments, he turned to offer her the cup.

Angel was indeed close. She had Alex trapped against the counter, leaving him no way of moving without brushing against her.

“What are you doing?” he asked with suspicion.

He didn’t miss the sparkle in her eyes. Breathing in deep, he tried his best not to let her know how she affected him. Since he couldn’t get a handle on his emotions he really didn’t feel up to battling wits with her right then. “Excuse me.” He waved for her to back up.

“Anytime we’re in a room alone together you have an excuse to leave. When are we going to talk about what this is between us?” she questioned as she raised a beautiful eyebrow.

“I don’t play games,” he told her. “If you need something just tell me.”

Sighing, she shook her head before reaching down to place her mug back on the counter next to his. “I’m not trying to play games. I’ve been trying to get you to talk to me.”

That sounded like a really bad idea to him. He didn’t even know the woman in front of him yet was more entranced by her presence than he had ever felt about anyone else. It made him uneasy not knowing exactly what Angel was. He relied on his shifter senses so much that it was strange Angel was different from anyone he’d ever met.

I felt that Alex and Angel were engaging characters and complemented each other perfectly. They also had good chemistry for the sexy love scenes. So although this is a rather short story the author manag...

Share what you thought about Pack Secrets and earn reward points.