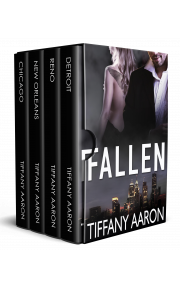 In punishment for rebelling against God, Celeste is banished from Heaven. She has spent centuries on earth trying to keep mortals safe from those of her brethren. As an Enforcer, she still does what she can to protect the innocents from the evil in the world.

Adam Montgomery lives on the wrong side of the tracks in Detroit as the head of a crime syndicate. He's crawled his way to the top, and nothing will keep him from getting what he wants. And what he wants is Celeste.

Yet as they try to track down a serial killer who's more than human, Celeste and Adam discover they are in danger of losing more than their lives. They could lose their hearts to each other, but is their trust enough to survive Celeste's secret?

Sometimes the biggest gamble can turn out to be the best bet.

William Bradford is a Fallen angel and a professional gambler, living in Reno while trying to keep the people who visit there safe from his insane brethren. Something's lurking in the shadows of the city, and William needs all his power to find the truth.

Abigail Hanson deals blackjack, but she hates gamblers, and William Bradford happens to be one of the best. She doesn't understand why she's attracted to him, and why she's willing to overlook his profession.

There's more to William than Abby could ever guess, but when danger comes calling for her, she's glad he's around to keep her safe.

When a fallen angel has to break a Vodou curse to save the woman he loves, all hell just might break loose.

Dominic LaFontaine is a night club owner in New Orleans, and he just happens to be a fallen angel as well. He's been in love with his best friend for a couple of years now, but has never found the courage to tell her. Then she starts dating another man, and he realises he could lose her.

Teresa Ryder has wanted Dominic from the first moment they met five years ago, but until recently he'd never given any indication that he saw her as anything more than a friend. So she finds another man who wants her. Unfortunately, Vincent Delacourte isn't the man she thinks he is, and Teresa finds herself swept up in a Vodou curse.

Now it will take all of Dominic's power and knowledge, along with that of his friends, to save the woman he loves from a madman's clutches.

Neither Grant nor the world is ready for what he unearthed in Peru.

Grant Carson doesn’t believe in angels or anything he can’t see or touch, yet the skeleton he has in the vault at his lab threatens all he thinks to be real. But that isn’t his only problem. Someone is looking for something, and they think Grant has it. He has to turn to Danielle for help.

Danielle Weston has lived on Earth for millennia, and she’s always managed to keep her heart safe. Until she meets Grant Carson, an archaeologist at The Field Museum. He’s never given her the time of day until his lab gets broken into.

Suddenly, Danielle has to decide if telling Grant the truth about where she came from and what she really was is worth risking his love. But if she doesn’t, things worse than losing Grant’s approval could happen, and the world isn’t ready to know the truth.

Reader Advisory: These books contain a brief reference to child molestation and a brief scene of sexual violence.

Celeste stared at the skyline of Detroit. She was bone-tired. When is the torment going to end? She didn’t expect an answer, since God had turned His back on her a long, long time ago. The moment she had chosen to forsake Heaven and rebel against Him, she’d condemned herself to living without His touch in her life.

Just once, she thought, leaning her head against the window, she’d like to know there was someone out there thinking about her. Tapping her forehead against the glass, she grimaced, knowing it would never happen.

She brought her thoughts back to the problem facing her. For two weeks, a cunning hunter had stalked the city of Detroit, preying on young women. A third body had been found twenty-four hours ago, and while the police had searched for clues, none had been found. They were now desperate to find something that would reveal who the killer was. Celeste knew who had committed the crimes. Tomas was the reason she had moved to Detroit ten years ago.

At that time she had tried to connect with him, but the fallen angel had become wary through the centuries, and had learnt ways to hide from humans and Enforcers alike. Now, he was finally beginning his game, a game she hoped to stop before he killed more girls.

Stalking into the office, one of her best agents growled, “It’s like he fucking vanished, Celeste. Not one damn clue.” Al Risen slumped in his chair and glared at her. He had joined Celeste’s investigation and security business seven years ago. With his expertise, the company had become known for getting the impossible done and keeping order in the Motor City.

“Of course he vanished.” She didn’t turn to look at him. “We have a serial killer on our hands.”

Al groaned. “Do we have to deal with him?”

“Hell, Montgomery has been trying to fuck you for months now. You’re playing right into his fantasies, Celeste. How do we know he isn’t committing these murders?”

“Why would he, Al? So I would have to beg for help?” Celeste laughed. “He doesn’t want me that badly.”

Al snorted. “Honey, he would do anything to have you. Trust me. I’ve seen it in his eyes.”

Celeste had met Adam Montgomery at the Mayor’s office several months ago. Before even walking into the office she had smelt the musky scent of leather, power and man. Her skin had flushed and she had felt her pussy become wet. Then she’d seen him standing by the desk.

Adam was taller than she was. He was broad shouldered and lean-hipped with skin tanned from hours spent in the sun. His unique light green eyes had focused on her. His lips were thin and slightly cruel. His light brown hair, streaked with golden highlights, barely brushed his shoulders. He’d worn his three-piece dark blue suit like he had been raised with money instead of on the streets, as rumoured.

She’d clenched her thighs and the throbbing in her clit had increased as her jeans rubbed against it. She’d tried to stay calm, but she hadn’t been able to control her body’s reaction. Her breasts had grown heavy and her nipples tightened to little pebbles. Celeste had never been so aroused, not even after an hour of foreplay, and Adam had known it. She had seen his own arousal flare in his eyes. The instant attraction had scared her.

He had asked her out that day and she had turned him down. No matter how many times he had asked since, she had said no. There was a danger in lusting after him. Celeste feared if she were to share his bed, she would lose her heart and she couldn’t afford to lose any more of it.

Celeste put the memory away when Al cleared his throat. She said softly, “I’ve already set up a meeting.”

Celeste shook her head. “I have to go alone, Al. There have been three women killed. I’m willing to do whatever I have to do to catch him.” Celeste pulled her coat on and walked from the office.

“Even play the whore for a demon.” She overheard Al say as she left.

As Celeste walked to her car, she reviewed all the information she had found on Adam Montgomery. It didn’t hurt to know everything she could about the man who was going to be her partner on this case.

Adam Montgomery was the leader of the Demons, a mortal gang that owned the Detroit streets. The Demons knew everything happening in the city, crime related or not, and they had a hand in almost every crime. Celeste had heard the rumours that there were some things Adam wouldn’t allow in his city. Some crimes were too terrible for even Adam to contemplate.

Adam controlled most of Detroit by virtue of the fear that the Demons inspired. Unfortunately—or maybe fortunately—Adam didn’t know the extent of the evil lurking in the shadows of the city. She did and it scared her.

Share what you thought about Fallen: Part One Box Set and earn reward points.