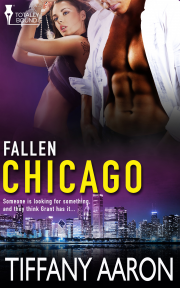 Book 4 in the Fallen series

Neither Grant nor the world is ready for what he unearthed in Peru.

Grant Carson doesn’t believe in angels or anything he can’t see or touch, yet the skeleton he has in the vault at his lab threatens all he thinks to be real. But that isn’t his only problem. Someone is looking for something, and they think Grant has it. He has to turn to Danielle for help.

Danielle Weston has lived on Earth for millennia, and she’s always managed to keep her heart safe. Until she meets Grant Carson, an archaeologist at The Field Museum. He’s never given her the time of day until his lab gets broken into.

Suddenly, Danielle has to decide if telling Grant the truth about where she came from and what she really was is worth risking his love. But if she doesn’t, things worse than losing Grant’s approval could happen, and the world isn’t ready to know the truth.

Publisher's Note: This book was previously released under a different title. It’s part of a series and is best read in order.

Danielle stepped from her car and handed the valet her keys. It had been a long time since she had eaten at Geja’s. She’d always enjoyed the fondue restaurant. Smiling at the doorman, she entered the cozy restaurant on the basement level of a town house.

“Of course. Right this way.”

Trisha’s laugh rang out as Danielle followed the man around the corner, and her mood lifted when she saw her three best friends.

“Already enjoying the wine, I see,” she joked as she slid into the booth next to Janet.

“It’s about time you got here. It’s your damn birthday party.” Trisha giggled as she toasted Danielle with her glass.

Joan leaned over to hug her and whispered, “Dickhead broke up with her today. She’s been crying off and on all day.”

Danielle reached out and squeezed Trisha’s hand. “I always said you were too good for him.”

Trisha giggled again. “It’s strange but you were the only one to tell me that. I thought you were jealous.”

Her eyebrows shot up. “Jealous?” She saw Janet’s warning glance. “Maybe, but let’s forget about that and celebrate.”

“You’re the only woman I know who doesn’t freak out about getting older.” Patty shook her head as the waiter poured Danielle some wine.

“Why freak out when it’s just a number?” She smiled. When you’ve been alive for thousands of years, one more doesn’t matter.

Janet and Patty were trying to fish their potatoes out of the boiling oil in their fondue pot while Trisha laughed hysterically at them. Danielle wanted to remember this moment when all her friends were happy and enjoying life. Pausing time, she tried to burn an image of them in her mind so she could remember it when they were gone.

“What are you doing?” Mika’il appeared beside her table. He glanced around at all the frozen people. “You’re not supposed to be able to stop time.”

“I’m not? I must have missed the meeting where you told us what we could and couldn’t do. Are you here to yell at me for this or was there some other reason why you’re gracing me with your presence?”

He glanced down at her. “I just wanted to say thank you again for helping Dominic. I know it goes against your beliefs.”

“This is the third time you’ve thanked me. Let it go. It wasn’t Dominic I was helping out anyway. I’ll pay for it somehow, I’m sure.” When the archangel didn’t answer, she looked up at him. Narrowing her eyes, she said, “I’m right, aren’t I? I’m going to pay for being a Good Samaritan.”

“It’s not my place to tell you how hard I worked on setting this up, Danielle.”

“What the hell do you mean by that?”

“I can’t tell you how difficult this job has been.”

She snorted. “I sometimes wonder exactly what your job is, Mika’il.”

“There are moments when I ask God the same thing.”

Her cell phone vibrated, breaking the spell. When she reached to answer it, Mika’il disappeared. Her friends were laughing again.

“I have to answer this.” She stood and went outside, since the use of cell phones was prohibited within the restaurant. “Hello?”

“Miss Weston?” A husky and angry voice came over the line.

“This is Grant Carson. I need you to meet me at the museum as soon as possible.”

“Why?” She could tell by the tone of his voice that whatever he had planned wasn’t going to be a happy meeting.

“It’s very important. I don’t wish to discuss it over the phone.”

“Okay. I’m in Lincoln Park. I’ll be there as soon as traffic will let me.”

She looked at her phone for a moment then put it away. When she went in to say goodbye, her friends protested.

“It’s an emergency. I really have to go.” She tossed some bills across the table to Janet, ignoring their pleas to take her money back. “That’ll cover most of the meal. I’ll call you later.”

She rushed from the restaurant and waited impatiently for her car. There had to be something wrong, otherwise Grant would never have called her. A faint feeling of uneasiness gathered in her stomach, and suddenly she had a compelling urge to get to the museum. Danielle contemplated using some of her power to hurry the process up, but she wasn’t sure if the problem was worth her wasting her power on. Since she didn’t have a way to replenish her powers, she decided to drive like mortals would.

Her car arrived and she drove across town without causing an accident or using any power while going as fast as she could on the crowded Chicago streets. She rang the bell beside the employee door. The security guard opened it and nodded.

“Miss Weston, Dr Carson is waiting for you in his lab.”

“Thank you.” She headed towards the basement area where the labs were.

She opened the door and gasped. Grant stood in the middle of the lab, pottery shards littering the floor around his feet. His tense shoulders and fists propped on his hips spoke of his rage.

This is the second book in the series I have read. So far the the books I have read have worked very well as stand-alones.

Read the first three books then read Chicago. In...

Share what you thought about Chicago and earn reward points.

This is book four in the Fallen series so what can you tell us about the others?

There will be eight books in the series when it’s finished. Each book focuses on a fallen angel and the mortal they fall in love with. Well, actually Book Seven is about Mika’il, the archangel and Book Eight stars Lucifer, the most famous fallen angel of all. But all the books talk about sacrifices made for love.