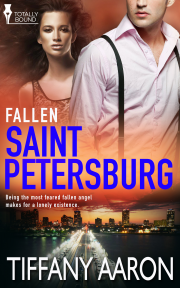 Book 8 in the Fallen series

Being the most feared fallen angel makes for a lonely existence.

Lucifer has spent millennia alone, despised by angels and mortals alike. He’s developed a tough outer skin to deal with the fear and rage he seems to inspire in everyone he encounters. Then in 1914, in Saint Petersburg—or Petrograd as it was known then—he meets a woman that steals the heart he’d thought he’d lost long ago.

Vera Turnick meets Lord Luka Kolwochak and finds herself instantly attracted to the mysterious stranger. When world events force them to part, she realises just how much she loved him.

Is there a way for love to last centuries? When visiting Saint Petersburg again after a century away, Lucifer finds a familiar face standing in the middle of the ballroom in the Winter Palace. How is it possible? Is Vera’s return a sign that God has finally forgiven Lucifer? Does he have enough faith to hope?

Lucifer sat at a table outside the café in Saint Petersburg, Russia, studying the mortals scurrying from building to building. They’re always in such a hurry. Rushing everywhere. Why don’t they take the time to appreciate their lives?

He glanced up to see Mika’il standing next to him. Lucifer blinked, but managed not to show any other sign of surprise. He could count on one hand the number of times the archangel had sought him out. Usually he went in search of Mika’il, since irritating him was the only way Lucifer could get the angel to acknowledge him.

“May I sit?” Mika’il gestured to the chair across from Lucifer.

He inclined his head. “Certainly. Would you like some coffee? They have some exquisite blends.”

Mika’il pursed his lips while he seemed to contemplate the decision. “Why not? I’m not busy at the moment.”

“Really? I thought there was always some mortal you needed to rescue from themselves.” He caught the waitress’s attention, holding up one finger before pointing at Mika’il. “Plus I would’ve thought you’d be spending any free time you might have with Bridget—considering you just found each other again.”

“Amazingly, Bridget doesn’t want to spend all of her time with me. She told me to leave her alone so she could do some painting.” Mika’il chuckled as he leant back to let the girl set his mug on the table. “Why are you here?”

Crossing his legs, Lucifer met Mika’il’s questioning gaze. “Am I awake or imagining this? You’re asking me why I’m here. Shouldn’t I be asking you that? I’ve never known you to come looking for me.”

He watched as Mika’il tasted his coffee and smiled when Mika’il’s eyebrows shot up in surprise.

“This is really rather good.” Mika’il took another sip before relaxing as he reclined in his seat. “Someone mentioned they had seen you hanging around Saint Petersburg for several months, and I got curious about why you would stay for so long. As far as I know, you don’t stay anywhere for more than a minute. If I didn’t know better, I’d say you have ADHD.”

Lucifer rolled his eyes. “I don’t have ADHD, my dear archangel. There is simply nothing in any city in the world that I haven’t seen or done already. There’s no reason to stay once I complete my mission.”

“Then why here? What is here that makes you stay?” Mika’il waved his hand in a vague gesture to include the city around them. “Don’t get me wrong. It’s a gorgeous city, but I don’t think it’s any more special than London or Berlin.”

Reaching up to touch his cheek, Lucifer looked up at the bright blue sky, though he wasn’t seeing it. He was running through the centuries he’d called Saint Petersburg his home, and all the events he’d been a part of or had seen while standing in the shadows. “I’ve been here almost from the beginning of the city when it was just a fortress to protect the maritime interests of Peter the Great. This is the place I’ve watched grow over the centuries, and I call it home. I don’t like leaving it even for a moment to go somewhere in the world to deal with a problem.”

Mika’il frowned and Lucifer could almost see the wheels spinning in the angel’s head. “I didn’t know you called this home.”

“Where did you think I lived?” Lucifer snorted. “Or did you think I didn’t sleep or rest at all and just wandered the earth, looking for mortals to trick and souls to steal? Sorry to disappoint you. I’m not as dedicated to my job as you are.”

“Shut up. I’m not commenting on your discipline for whatever you’re doing on earth. I think you’re far more dedicated than you should be. There are times when I would’ve loved for you to just hole up somewhere to keep the world from going to shit.”

Lucifer picked up his cup to take a drink and swallowed before he said, “You do realise that some of those major events I had nothing to do with? I think you’re giving me far more credit than I deserve. I’m not as involved in the world as you seem to believe.”

The expression on Mika’il’s face told Lucifer his former friend didn’t believe him, but he didn’t care. Not anymore. He’d decided when he’d first returned to Saint Petersburg that he wasn’t going to waste his time on trying to get Mika’il to accept him as a friend again. Lucifer had reached a point when he realised it no longer mattered what anyone thought of him. He knew the truth of the situation and that was the only important thing.

It’s pretty safe to say that Saint Petersburg is the finally entry in the Fallen series. All Fallen and missing angels have been accounted for and everybody has gotten a sweet indi...

Share what you thought about Saint Petersburg and earn reward points.