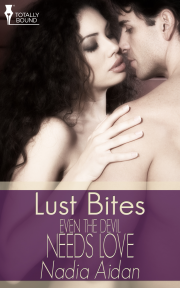 Even the Devil Needs Love

A god, a demon queen, and the devil—Hell just got hotter!

Lilith walked out on her husband, Lucifer, one year ago presumably to shack up with Lucifer's nemesis, Odin, and do good works as a wannabe Valkyrie.

But now she's back— because Lucifer has taken something that doesn't belong to him, something Lilith wants—an honorable soul. So clad in her skintight leathers, Lilith takes a little trip back to Hell to retrieve it.

But she knows by doing this she is playing right into Lucifer's hands, because he never wanted that soul in the first place, he only took it to bring her back. And now that she's back she can finally give him the one thing he wants more than anything else—an heir.

Lucifer’s cock was hard and heavy—the hot little demon beneath him, open and ready for his penetration, her body as sweet and juicy as a ripe peach. He closed his eyes, the fat purple head of his dick pushing inside her warm cunt. He was almost to paradise, seated fully inside her tight sheath, when another hot little demon—no, make that the hottest demon he’d ever known—burst into his bed chambers and ruined what would have been a great night.

“I want that soul back, Lucifer! That was not your soul to take.” She slammed the door behind her, the walls rattling in the wake of her fury.

His cock deflated instantly and he rolled off the cute blonde. With a curt nod he dismissed her, his eyes tinged with longing as he stared after her curvaceous backside. That longing soon gave way to irritation when his intruder planted herself smack dab in front of his face, blocking his view of the perfect apple bottom scurrying out of his chambers.

“Lilith, couldn’t this have waited?” He stood, towering over her, his eyes glowing a scarlet red. “I was just a little busy.”

She stood before him, unimpressed by his mounting fury. Instead, of backing down, as most would have, she closed the distance between them. And he forced himself to bite back a groan when her leather corset, binding what he knew were gorgeous full breasts, brushed the hair-roughened skin of his chest, awakening his arousal. His body always reacted this way when she was near, whenever she touched him. It was as if his cock needed to remind him he’d been a fool to let her get away in the first place.

“That soul you took? The young soldier? That’s my soul, you dumbass. She belongs to Odin, not you.”

“She was an assassin—a killer.”

“She was a soldier—a warrior. She belongs in Valhalla, not in Hell.”

Share what you thought about Even the Devil Needs Love and earn reward points.