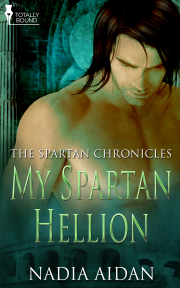 Book 1 in the The Spartan Chronicles series

When a spirited, Carthaginian slave and a noble Spartan general are thrust together, passion flourishes between the unlikely pair. But is passion enough to weather the turmoil of treachery, war and murder brewing in Ancient Sparta?

Ripped from her home and forced into slavery, Lamia escapes from one master only to find herself the prisoner of another—handsome Spartan general, Thanos Aristaeus. Lamia vows never to surrender to Thanos, who openly desires her body. Yet, she never imagines he will also threaten to steal her heart.

General Thanos Aristaeus couldn't have anticipated that his brief trip to Athens would yield him a spirited Carthaginian beauty…who despises his very existence. Lamia defies him at every turn, but Thanos soon learns that lurking beneath the surface of her vehement denials of him is desire—a desire which she fails to disguise and is equally matched by his own passion for her.

Unable to deny the scorching attraction between them, the pair find themselves embroiled in a heated affair, one that is doomed to meet a bitter end when faced with the political turmoil brewing in Ancient Greece.

Torn between their two worlds, Thanos and Lamia must ultimately decide if they are willing to sacrifice everything for a love they never imagined they would find.

Treachery, war and murder—can an unexpected and unlikely love flourish when faced with such obstacles? Lamia and Thanos are about to find out.

Bones shattered beneath her blade, the warm ooze of blood coating her hand as she twisted her wrist and plunged deep. The man fell clutching his chest, the bright glow of life fading from his eyes like waves retreating from the golden sands of the Aegean.

Lamia did not spare the fallen soldier her pity, or a measure of remorse. The steely glint of determination hardened her gaze and she whipped around, her sword slicing through the air, a deadly warning to the remaining Athenian soldiers to hold their ground. Three of their men lay dead, and those who still lived hesitated on the other end of her blade, their fear wafting so strongly through the air she could taste its bitter flavour upon her tongue.

A dull hum echoed in the distance, the tiny reverberations whispering through her, even as every muscle grew rigid with the sound. Her pounding heartbeat matched the even thud, as steady as the faint clip—clap of horses' hooves, the subtle quiver stirring the dirt beneath her bloodied feet.

The trembling of the earth grew, while a chilling silence descended upon the agora of Athens, which only moments before had bustled with a cacophony of clashing voices and the din of music.

Her gaze remained riveted on the Athenian soldiers who took several tentative steps backwards. They were retreating, the fear in their eyes heightening her own, and her blood turned cold as if ice water now raced through her veins.

Squinting against the bright glare of the sunlight, she scanned the golden horizon, curling her hand tighter around her sword when she caught her first glimpse of the blurry figures in the distance.

A curse trembled in her throat but she clamped her lips tight.

Nausea clawed its way into her belly, insistent and violent, forcing her to battle against the bone-chilling fear that wove its way through her body. She could never hope to defeat a dozen men, but neither would she simply lie down and await defeat.

She had survived this long...

A cloud of dust rose like a pre—dawn fog around the advancing soldiers, their sandalled feet stirring up the arid dirt with every step they took towards the public square. These were not Athenian soldiers. Their movements were too efficient, the even staccato of their marching feet far too precise.

Her lids shadowed narrowed eyes as the soldiers drew nearer. Their bronze armour shimmered beneath the rays of the mid—dawn sun, the reflective glare illuminating the flag that bore their distinct crest. Spartans. Her heart beat wildly as if trying to escape from her chest, the dull throb of fear coiling inside her once again.

They had sent Spartans to kill her and she would have laughed had her situation not been so dire, her fate so clearly sealed. She was nothing but a simple swordsmith of the Meshwesh. Yet Attalus had sent soldiers of the finest army the world had ever seen to dispatch her. That he thought she was a dangerous threat to be quickly and efficiently eliminated was clear.

The Spartan soldiers marched forward until they were no more than five body lengths away. Corinthian—style helmets obscured their faces, the ominous masks of sturdy iron revealing only their eyes—all focused, full of determination, and centred solely on her.

A lone soldier stepped away from the phalanx, and, even though he wore the crimson horse hair crest atop his helmet that proclaimed him as their leader, she would have known he was the one who commanded them by his long strides and the confidence of his gait. His powerful build drew riveted gazes, and authority clung to him, surrounded him, emanated from him, as if he owned the entire world.

"Put down your sword," he demanded when he stopped before her, the deep timbre of his voice resonating with unyielding strength. The arrogance of his tone told her he was used to having his commands instantly obeyed.

This dawn he would be disappointed.

She tightened her grip around the hilt of the sword, her bruised knuckles red and chafing beneath the harsh sun. Holding his gaze, she stubbornly shook her head.

"We do not wish to harm you. Simply put down your sword."

She did not trust his assurance that no harm would come to her. After all, Atallus had sent him. She twisted her head from side to side with another defiant shake.

With a certainty, she knew she was going to die, and had she been alone she would have cried at the injustice of it all. She'd done nothing to deserve death, while the one whose hands were forever stained red with blood would probably draw breath for many annos. She blinked at the tears that burned in her eyes as her breath came out in ragged pants, dragging through her lungs. She refused to cry, for she was not afraid to die...not if that was her fate...

The one who'd spoken, the one she'd decided was their leader, turned towards his men then and nodded. His silent command was enough—the phalanx retreated, leaving him standing there before her...alone.

Beneath her breast, her heart did a quick flutter then thundered, sending blood rushing furiously through her veins, filling her with equal measures of dread and determination as she waited.

He faced her again, his clear blue eyes intense as he unsheathed his sword and approached slowly, hovering just beyond her striking range. Gripping her weapon, she began to circle, her wary gaze darting back and forth as she tried to focus both on him and on the men standing behind him. She did not trust them not to attack if she should wound him.

Circling like two caged tigers, they regarded each other warily, watching, waiting for the other to attack.

"Drop your sword!" he shouted again.

"If you are going to kill me, then so be it. I refuse to go back to Attalus."

His gaze flickered and he stilled. "I will not send you back to him. You have my word."

She studied him with narrowed eyes, searching for just the tiniest kernel of deceit shadowed upon his face. He was trying to trick her. As soon as she relinquished her weapon he would strike and she would be dragged back to Atallus where he would beat her, rape her, do whatever else his perverted mind could conjure.

"I speak the truth. You need only to put down your sword."

She wanted to believe him, trust his word that he spoke the truth, but she trusted no one. Lamia shook her head. "No."

I recommend this to anyone who likes to read about warriors, Sparta, historical romance or interracial romance.

Share what you thought about My Spartan Hellion and earn reward points.

BB&W: Why did you choose an interracial theme for your novel, My Spartan Hellion?

The answer to that question isn’t a simple one for me. In recent years American society has become more comfortable with interracial pairings thanks to successful television and film writers, like Shonda Rhimes the creator of Scandal and Kriss Turner, the writer of the breakout film, Something New.

The expansion of interracial relationships in television and film came about at the same time we began to see more fiction works featuring relationships with interracial themes, and I have no doubt this was due in part because of the changing of the times. Before, when most people thought of an interracial relationship it was generally a black man with a white woman, which I think speaks to more open mindsets and changing norms in general, which is great, but for some reason it took much longer for mai

Other books in the The Spartan Chronicles seriesView Series Page