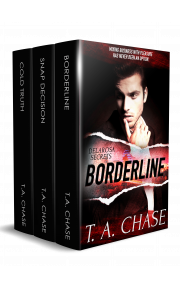 Surrounded by secrets, two men search for a serial killer, while trying to keep it from becoming personal.

Mac Guzman is a Texas Ranger and lead detective on a serial killer case rocking the city of Houston. He’s willing to take help from anyone, especially when it comes in the form of the gorgeous FBI profiler, Tanner Wallace. Mixing business with pleasure has never been an option for Mac, but he just might change his mind and seduce Tanner into his bed.

Tanner Wallace joined the Bureau and became a profiler to catch bad guys. Also, it might have a little to do with making up for the evil caused by his family’s business. When he’s called in to consult on a serial killer case in Houston, Tanner never expects to meet Mac. The handsome Texas Ranger brings to mind hot, sweaty nights wrapped in each other’s arms, yet Tanner knows Mac would walk away if he ever found out who Tanner’s family really is.

With the threat of another murder hanging over their heads, Tanner and Mac will have to find a way to work past their differences before the killer strikes again.

Sometimes the only way to do your job—and discover love—is to trust your instincts.

D’Marcus ‘Snap’ Jefferson is a DEA agent who has worked hard to keep drugs from hitting the streets of Houston. So when Kenneth Santos walks in, claiming to have information about an upcoming drug shipment, Snap must make the choice whether to trust the stranger or not.

Kenneth Santos is a recovering addict and ex-con trying to clean up his act. Some mysterious informant has chosen him to act as the go-between with Agent Jefferson. It’s a precarious line Ken must walk because his life could be in danger if the cartels discover he’s working with Snap and the DEA.

Neither man expects to fall in love while playing such a dangerous game. Yet Snap always trusts his gut and it’s telling him that loving Ken could be the best decision he’s ever made.

When the truth comes out, Victor and Bieito must decide how strong their love really is.

Victor Delarosa has been the head of the Delarosa cartel for most of his adult life, and Bieito Perez has been there by his side the entire way. Yet Victor has secrets he’s kept hidden, even from his long-time lover, and when those secrets show up on Victor’s doorstep, he struggles to find a way to explain while hoping he won’t lose Bieito.

Being Victor Delarosa’s right-hand man and his lover is difficult at times for Bieito Perez, but he wouldn’t have his life any other way—until the day he realizes Victor’s been keeping secrets and he has to re-evaluate their relationship.

Between dealing with a rival cartel, law enforcement and everything else being a drug lord requires, Victor and Bieito need to redefine their lives and find the courage to say the word ‘love’ out loud before it’s too late for anything other than goodbye.

Macario Guzman stalked into the Houston headquarters of the Texas Rangers Company ‘A’. Chaos reigned as he pushed his way through the seething crowd of reporters to reach his boss’s office. Major Billingsley looked up when Macario tapped on his door.

Billingsley grabbed his hat and gun before shoving his way out through the mob.

“Couldn’t you have told me to wait for you in the parking lot?” Macario growled as he sidestepped a precariously perched photographer.

“Didn’t realize we were going anywhere until after I got off the phone with you.” Billingsley’s brisk Harvard accent was at odds with his Stetson and boots.

“Where are we going?” Macario removed his hat, scrubbing his hand through his hair before putting it back on.

Frustration and exhaustion warred inside him, and he resisted the urge to give Marissa another call. He hadn’t talked to Marissa in close to two days. Normally that wouldn’t have been a problem, but his foster sister had been troubled the last time they’d seen each other and Macario was worried about her.

Combining non-existent sleep with investigating the serial killer haunting the streets of Houston, Macario was running on fumes.

“We’re going to the Bureau office.” Billingsley grunted as he gestured for Macario to drive.

“Are they trying to muscle in on the case?” He climbed behind the wheel of his non-descript tan sedan.

He had respect for the FBI and the agents who worked there, but sometimes he tended to think they were media whores. This serial killer case had shaped up to be quite a press frenzy. Something the Bureau always loved to be a part of.

“I asked them, Mac. Our profilers are good, but the Bureau has some of the best.”

Macario understood. Jurisdiction didn’t matter anymore. Not with four women dead and no real clues except their killer liked to use a knife. His stomach rolled at the thought of the most recent victim.

“You look like shit, Mac. What was the point of sending you home last night if you weren’t going to sleep?”

Bringing up Marissa never crossed Macario’s mind. No one at the Rangers knew anything personal about him and he wanted it that way. Ten foster homes in ten years had taught him to keep his mouth shut and any emotions hidden. It wasn’t until he was fifteen and had been placed with the Levisten family that he’d had an inkling of what family could mean.

“I’ll sleep when the case is over, sir.” And when he finally talked to Marissa again.

They arrived at the Federal Building where the Bureau, along with several other government agencies, had their local offices. As they walked in, several men wearing DEA jackets rushed out.

He turned to see a man peel away from the group. He grinned and shook the agent’s hand.

“Snap. It’s good to see you, man. What’s going down?” Macario nodded at the convoy of black SUVs pulling up in front of the building.

“Just got a tip about Victor Delarosa being in town. We’re planning on hitting a spot we think he might be.” Snap shook his head. “More than likely he won’t be there.”

“Man’s like a ghost. It’s amazing how he manages to get away from everyone.” Macario frowned.

“Almost like he has an in with the agency or something,” Snap muttered.

Mac wouldn’t have been surprised if they discovered Delarosa really did have a spy in several federal agencies.

“Snap, get your ass over here,” one of the other guys ordered.

“Good luck. Give me a call. We’ll play some poker together soon.”

Billingsley and Macario watched the men leave before going through the metal detectors and heading up to the FBI offices.

“I feel sorry for those guys. They just keep chasing their tails with Delarosa.”

“We’re here to see Special Agent in Charge Samuel MacLaughlin. I’m Major James Billingsley and this is Ranger Macario Guzman from the Rangers.”

The receptionist buzzed someone and repeated what Billingsley had told her. She nodded once before hanging up.

“Agent MacLaughlin will be right out.”

They didn’t have to wait long.

“Major Billingsley.” A booming voice ran through the lobby.

A large, red-faced, white-haired man strolled up to them with a big grin on his face.

“Agent MacLaughlin.” Billingsley shook the man’s hand. “Thanks for seeing us.”

“No big deal. Always glad to help out fellow law enforcement. Come with me.”

Macario kept his mouth shut as they wound their way through the central room where most of the agents’ desks were. He nodded at a few agents he recognized from joint operations.

MacLaughlin waved them into his office. “So you’re looking for some help on that serial killer case I’ve been hearing about.”

“Please, call me Sam. And you are?” Sam shot a glance at Macario.

“Ranger Macario Guzman. I’m the lead on the murders.” He shook Sam’s hand.

“Nice to meet you. Sit. Would either of you like some coffee? What can we do to help you out?”

Macario sat, but didn’t say anything. Going to the FBI was his boss’s idea and he wasn’t about to take over.

Share what you thought about Delarosa Secrets Box Set and earn reward points.