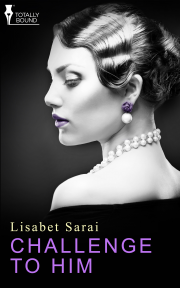 All the wealth in the world can't buy willing surrender.

Andrew MacIntyre, heir to a vast empire of railroads, mines and mills, is the second or third richest man in America, and by far the most eligible bachelor among the society folk summering in Newport, Rhode Island. His mother has filled their opulent mansion with marriageable daughters of bankers and industrialists, but Andrew knows none of these callow young women can satisfy his perverse sexual needs. No respectable girl would ever consent to being bound and beaten, to serving and obeying him the way he craves. His money gives him the freedom to purchase anything except his heart's desire—a submissive partner to share his life.

Independent, progressive and well-educated, labour activist Olivia Alcott has dedicated herself to improving the lot of the workers who toil in the factories that have made Andrew and his class so wealthy. The strike she organises triggers a confrontation between her and the handsome billionaire. Although their disparate backgrounds and values make them natural foes, something stronger draws them to one another—an intuitive recognition of complementary fantasies.

Andrew offers Olivia a bargain—better working conditions for the mill staff, in return for a weekend of her unquestioning obedience. Olivia will help him deflect the attentions of the potential mates assembled by his mother, as well as providing more intimate services. Given Olivia's origins, a more enduring relationship appears impossible—but Andrew is not the sort to give up something he wants.

Andrew MacIntyre peered over the edge of his newspaper. A diminutive, pastel-clad figure gazed up at him from the foot of the terrace where he was finishing his breakfast. Flaxen curls framed her fair, conventionally pretty face. At the moment, her rosebud mouth was twisted into an exaggerated pout that he found distinctly unappealing.

"I’m sorry, Miss Linton. Did you say something?"

"Come play croquet, won’t you? You so rarely join us. And you’re so very good at the game."

He surveyed the vast expanse of lawn sweeping down towards the sea. A bevy of female forms attired in ankle-length summer frocks ambled about on the lush green backdrop, chattering and lazily swinging their mallets. They were far enough away that he could barely discern their features under their hats, but he knew who they were. Henrietta Linton, Mary Beth’s younger sister. Louise Vanpatten and her cousin Thelma. Cynthia Bellamy. Selena Larimer. Plus his own sisters, Letty and Ann. Aside from his siblings, all were guests whom his mother had invited to Wavecrest for a festive week leading up to Independence Day—all unmarried daughters of wealthy bankers and industrialists.

"Perhaps after I finish my coffee and the business pages." He favoured her with a slight smile. Her ecstatic expression improved her looks considerably. "Maybe another ten minutes. Will that do, Miss Linton?"

"Oh, yes! Thank you, sir!" She added the honorific in an unconscious response to his formality. Andrew grinned wryly as she scampered away, back to her giggling friends. Indeed, he wouldn’t mind playing with them, but not the sort of game they had in mind.

Closing his eyes, he summoned an image of Mary Beth and Henrietta, naked save for their chemises, bound to two of his mother’s ghastly mahogany dining chairs. Their wrists fastened behind their backs, their thighs strapped open, their blonde tresses loosed and tumbling around their worried faces...the vision was delicious. He preferred his women dark-haired, but the Linton girls’ pale skin would mark nicely, either with the rope or the crop. If he married one of them, she’d have to submit to her husband’s desires, wouldn’t she? Still, it would be far more entertaining to have the two of them together.

He shook his head to scatter the lewd pictures and drained his coffee cup. In the distance, summer sunlight sparkled on Narragansett Bay, too bright to gaze upon for long. Later, it would be hot, and there might well be a thunderstorm by dusk. His cravat was strangling him. He felt the first twinges of a headache.

Any of the women on the lawn would accept his proposal in an instant. He was, after all, tall, athletic, well-favoured, intelligent and charming, not to mention owner of the second or third largest fortune in America. But none of them would willingly accede to his unusual sexual demands, he was certain. They were too young, too unformed and far too proper, more concerned about society’s expectations than their own desires.

He wanted a woman whose needs complemented his own, who craved the sort of discipline he so loved to administer. His social position and responsibilities made that a hopeless dream. No woman of his own class would risk her reputation by engaging in that sort of behaviour, even in private. If indeed any of his cohort had passions that matched his, they would never admit it, even to their spouses, for fear of divorce and disgrace.

Back at Yale, in desperation, he’d occasionally strayed down to the port and hired a woman of the town to play the role of his slave. No matter how tightly he tied her or how hard he whipped her, those experiences were never truly satisfying. How ironic that he could buy almost anything in the world, but not the thing he wanted most.

Share what you thought about Challenge to Him and earn reward points.