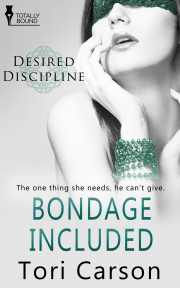 Book 5 in the Desired Discipline series

André would do just about anything to please Adriana, but the one thing she needed, he couldn’t give.

Adriana has it bad for André, a consummate bachelor. He owns a kink club and often jokes he’ll die single with a flogger in one hand and a whip in the other.

Their instant spark turns into a smoldering fury when she learns he has three live-in trainees. She has no intentions of being one of many. She is a one man kind of girl and she demands the same in return.

André is equally intrigued by the black-haired beauty. Though he has three women, ready and willing to please his every whim, he can’t stop fantasising about Adriana. She invades his thoughts and dreams. He enjoys their crazy, non-sequitur conversations. He looks for ways to make her smile. Yet, despite his desire, André knows he can never be what Adriana needs.

When a situation arises and Adriana suddenly has André all to herself for nearly four months, she’ll stop at nothing to land her man. Though she lacks his experience, Adriana has more than one surprise up her sleeve. Will she be the woman to curb his bachelor ways?

“When you are two going to stop the furtive glances and just fuck already? This dancing around the issue is making my ass tired,” Eva complained to André.

Adriana giggled and ducked behind a pillar. Eva was pushing André pretty hard. He hated it when women used ‘inappropriate’ language.

“And don’t even pretend you don’t know who I’m talking about, Boss, because everyone has seen you guys making googlie eyes at each other. It’s the talk of the club.” Eva poked him a little more. “You two sit on the couch and talk all night, damn near every night. You do remember this is a sex club, right? It’s called that because people have sex here. If you want to talk and hold hands and shit, you go to a church social.”

“Are you finished?” André glared at Eva.

“Not really. I was kind of on a roll, but since I need a steady paycheck, I’ll shut up now.” Eva smiled sweetly.

“You know she won’t scene with me. That’s the word we use in polite company—‘scene’, not ‘fuck’.”

Adriana couldn’t see his face, but she knew the exact expression he was using with Eva. She turned away and clamped a hand over her mouth to keep him from hearing her laugh.

“She doesn’t like that I’m under contract with the girls. Until that changes, she won’t allow our friendship to become sexual.” André kept his volume low, but it still carried.

God, she loved his voice. She could listen to it for hours, which was a good thing because Eva had been telling the truth. Most nights she spent holding hands and talking to André. It was pathetic. She wanted so much more, but he was being a stubborn ass. He wasn’t in love with those girls, but he wouldn’t break their contracts either.

“She’s a smart woman. Your subs are mean, spiteful witches. Do you have any—?”

With her heart pounding in her chest, Adriana rushed to the bar beside André. She couldn’t allow Eva to finish that sentence, no matter how true it was. “Hi!”

André turned and greeted her with a huge smile on his face, which promptly disappeared the moment he saw she was wearing simply a towel. His head bounced up and he started examining the ceiling tiles. “Hi… I um, I have some important matters…in my office. I’ll be in there, if you need me…once you’re, um, clothed and…yeah.” He practically ran toward the executive offices.

“Damn, I wish I had that on tape. The big bad Dom of DiscipliNation stammering like a school boy because you stood next to him in a towel. You should screw that man and put him out of his misery,” Eva teased Adriana.

“If I do, I’ll never have him all to myself. I refuse to be one of many, Eva. We’ve talked about this.” She had to stand her ground.

“I still say you’re wrong, but watching the misery you’re putting that man through has become my reason for coming to work each day, so who am I to say stop?”

“You’re bad. You were pushing his buttons by cussing like a sailor. That’s not how you normally speak. Why do you do it?” Adriana had to ask.

“Because I can. And you’re one to talk. The man practically came in his pants seeing you dressed like that. Is this your latest strategy?”

“No, this was me keeping you from causing even more trouble. You were about to tell him things I’ve told you in confidence. Things you promised me you wouldn’t share with anyone.” Adriana gave Eva her most fierce death glare.

“Someone needs to clue the man in on the crap his subs have been pulling. He is the owner of this club. He has a right to know that his perfect angels are really Satan’s trolls.” Eva reversed the death glare and shot it right back at her.

“It would be their word against mine. André couldn’t take my side without making it ten times worse. Besides, he couldn’t assume it was one of them. He’d have to consider every club member if he investigated their pranks and the last thing he needs right now is another worry. Just let it drop. I’m a big girl, I can handle this.”

“You’re an idiot who is in love with a bigger idiot, but I’m a fine one to talk. My love life is more of a disaster than yours. Okay, I’ll keep my mouth shut.”

“Thank you. And I need a favor.” Damn this is the worst timing.

“One of the trolls put Nair in my shampoo bottle. I sweated enough for three women in our pole dancing class tonight and need to shower. Can I borrow yours?”

“This is me biting my tongue.” She shook her head and reached under the cabinet for something. A moment later, she handed Adriana a key. “Locker three-twenty-eight.”

“Thanks, Eva. You’re the best bestie a girl can have.”

André sat in his office with his head cradled in his hands. Fuck, how had his life gotten so out of control? His business was bringing in millions of dollars a year and more than that, he was proud of what he’d accomplished. He’d established safe havens all over the country for lovers of kink to come and learn from each other. The friends he’d made along the way had become his surrogate family.

None of it mattered to him anymore. All he thought about was Adriana Parma. The crack Eva had made about a church social had hit a little too close to home. Adriana was a sweetheart. She deserved to find a good man, one her family would admire, so she could settle down and have babies. In almost every conversation they had, she talked about her family, her large, Italian, ‘in your business’ family. It was a concept that over the years had become almost foreign to André.

His roots were French Cajun and he’d grown up in a large, ‘in your business’ type family. Unfortunately, they didn’t approve of his business and thus he was dead to them. Of the hundreds of people sharing his familiar DNA, only Amanda and Trixie would speak to him. He never discussed it and he tried hard to never think about it, but it hurt. For years after their rejection, he’d felt as though he’d been stabbed in the back. It had since, mostly, healed. He and his band of other misfits had joined together and built their own family, one that believed in acceptance. Most days it was enough.

It didn’t matter how much he clicked with Adriana. It didn’t matter that when he was with her, he was at peace. He refused to claim his happiness at the expense of hers. She loved her family fiercely and would never be happy without them. André couldn’t be in the same room with a family, any family, and not feel the pain so deeply he struggled to breathe.

This is such an endearing story. I was captivated from the very beginning. Andre and Adriana are clearly meant to be together; their connection to one another, even first as friends, is easy and and meaningful....

Tori Carson has another hit on her hands. Although I love this whole series Adrianna and Andres story is my favorite. Their love and playfulness kept me riveted. The steamy sex and intense connection between...

Share what you thought about Bondage Included and earn reward points.

What’s the world coming to? It’s impossible to find a decent mirror these days. Each one I gaze into reflects back such a narrow view of the real me that they have to be defective. As a young woman, I tried so hard to hide the fun-loving side of me, to always present a serene, professional front. It seems now that persona is the only one reflected back.

When I started writing Bondage Anniversary, I never dreamed it would be my breakthrough piece. It began as a naughty tale meant for my husband’s eyes only. He had been away on a business trip and I spent many lonely hours working on the story. Once I emailed it to him, he told me, “This is it, baby. This is the one.” Turns out he was right.

Now, I have five books published and two more, including the opening book of a new series, coming out in March.