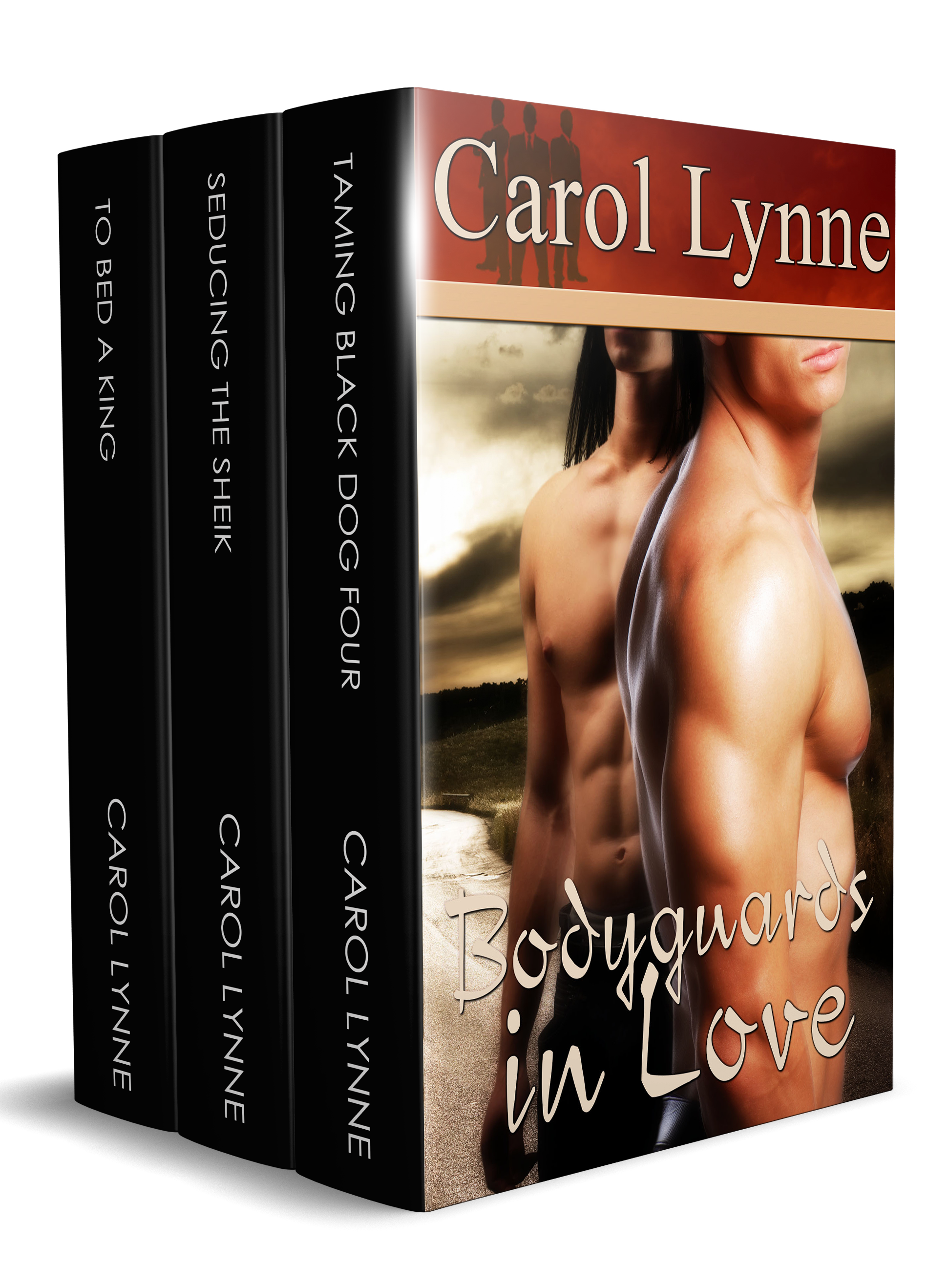 The bodyguards of Black Dog Four had been carefully chosen for looks, temperament, battle skills and sexuality. In the tradition of the Spartans, the idea was to see if lovers worked better as a team than merely friends. The experiment had seemed like a complete success until they'd been sent to guard Maria Valdez. After Maria was killed in an explosion, all four men had refused to work together.

Addy Constentine needed around-the-clock security if she hoped to legitimise her father's empire. With her stepbrother now in prison, Addy's goal was to keep the family out of the underworld it had been entrenched in for decades.

With death threats coming from several different sources, Addy needed the best. She needed the men of Black Dog Four.

It's a daily battle for Prince Ali Zahar to hold power of Jurru. After two men from Three Partner's Protection are injured while guarding him, there's only one man left who will take on the challenge, Gavin Burk.

With no friends or family, Gavin lives his life volunteering for dangerous missions. He's learned not to get close to anyone and as a result leads a very solitary life, but the passion stirred by Prince Zahar threatens the control Gavin has worked so hard to maintain.

Before Gavin has a chance to come to terms with his desires, he and the prince are forced to take shelter alone, in a hidden fortress, deep in the desert. There, Gavin's control is tested and fails. Life will never be the same for the ruler and his bodyguard.

Bodyguard Raven Stone has a reputation for trying to steal the husbands of the clients he's hired to follow. When he's sent on a special assignment to guard the Crown Prince of Jurru, Raven's first instinct is to use his sex appeal to win over the future king. He's told the Crown Prince is straight, but Raven has yet to meet a man he couldn't lure into his bed.

For years, Crown Prince Ghazi Zahar has managed to hide his sexuality from the hordes of paparazzi that continue to follow his every move. So why does his new chauffer make him yearn to take risks? When the newly crowned king of Jurru discovers Raven's true identity, he asks him to return to his island home and help protect his young nephew. Living his life so close to temptation has Ghazi in a constant state of agitation. Would the people of his country accept a gay king?

Raven's always fancied himself a bit of a queen, but he's never considered the possibility that he actually might become one. Can he keep his king alive long enough to enjoy it?

Addy Gabriel-Constentine speared a bite of steak with her fork and glanced around. The four men who'd been given the task of guarding her continued to glower across the table at each other.

The sexual tension between the four was so thick she could cut it with her knife. She knew what had happened the last time they had worked together, but the men needed to get past their failure to protect Maria Valdez.

From the information Addy had been given by Mac, the head of Three Partners Protection, Maria's death couldn't have been avoided. Yet the team known as Black Dog Four still blamed their client's death on the sexual relationship they'd indulged in with each other.

Life in the Constentine mansion had become almost unbearable. "I spoke with Joe Dunn earlier."

Jack Drake, the blond, clean-cut, all-American of the group, looked up from his plate. "Any news?"

"The Feds did a random search of Lenny's jail cell and came up with a hidden cell phone." She almost giggled as all four men stopped chewing and stared at her. Well, that's one way to get their attention.

"Did they get anything off the phone?"

Addy continued to calmly eat her dinner. Letting the men know the conversation with Joe had shaken her, wasn't an option. As skittish as the four of them already were, she knew if they thought she was worried, she wouldn't even be allowed to go to the bathroom alone.

"Joe said they're working on it, but so far it looks like Lenny called only those throw-away prepaid phones."

Lobo pushed his chair back and strode towards the window, his long dark brown hair bounced with each step he took. He unclipped the small radio from his belt. "Dean?"

"Yeah," a voice sounded over the radio.

"Lenny Rafalo's been in contact with someone on the outside. Keep your eyes peeled."

Lobo continued to stare out the window.

"Sit down and finish your dinner," Addy told him.

Addy's gaze went to Jack. He seemed to be the only one of the group that could calm Lobo.

Jack rolled his eyes and stood. He pushed his chair in and walked toward the six-foot-four-inch ex-mercenary. "Hey," he said, putting a hand on Lobo's shoulder. "Why don't you come with me into the command post?"

Lobo turned away from the window. "You think we need to go over security?"

Addy smiled at the pair as they walked out of the room. She eyed Renaldo and Carlo. The two were almost a mirror image of each other with their closely cropped black hair and big brown eyes. If she didn't know better, Addy would swear they were brothers. "Well, don"t you need to go over security, too?"

Carlo set his glass down and shook his head. "Two of us with you at all times, remember? Jack'll let us know if the plans change."

The comment brought up an interesting question. "I've noticed that you all seem to defer to Jack. Is he team leader?"

Renaldo shrugged and glanced at Carlo. "Not officially."

Addy could tell Renaldo wanted to say more, but was worried. "I know the four of you used to be lovers."

"Mac tell you that?" Renaldo shifted uncomfortably in his chair.

"Yes. He felt I had a right to know about what happened the last time you all worked together." She reached out her hand and covered Renaldo"s. "Mac told me you couldn't have saved Maria."

Addy sighed. She could tell from their closed expressions she wouldn't get any more out of them, at least not yet. She wiped her mouth with her napkin and set it on the table next to her plate. "If the two of you will excuse me, I need to call Joe, I mean Agent Dunn, back."

When she stood, both men got to their feet.

Share what you thought about Bodyguards in Love: Part Two: A Box Set and earn reward points.