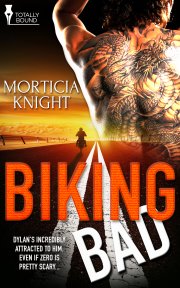 When Dylan, a young wannabe investigator, stumbles into the Mojave Sidewinder’s MC bar, he finds all kinds of trouble—especially in biker Luc ‘Zero’ Villarojas.

The Mojave Sidewinders is the largest gay MC club in Southern California. They’re also one-percenters, which makes them alluring to those looking for trouble and a danger to those making it. Luc ‘Zero’ Villarojas has been a brother ever since the club’s prez took him in as a runaway. At thirty-four years of age, he’s content to ride his hog, chase tail and run his tattoo and piercing parlor, Zero to Sixty.

Dylan has had to take care of himself since his aunt died when he was still a teen. Even though he’s barely twenty-two years old, the small spitfire has made his way in the world as best as he can and has even started his own would-be investigative agency. He’s proud of himself, even if his agency is on the edge of town in a ramshackle building.

Working his first big case involving a missing young man, Dylan barges into Road Rage, the Mojave Sidewinder’s exclusive bar, and starts asking questions. When it looks as though he’s about to get beaten up, a large, muscled biker covered in ink comes to his aid. Dylan’s incredibly attracted to him—even if Zero is pretty scary and Dylan’s still a virgin. But is there something Zero knows about the missing man that he’s hiding? And is Dylan in more danger than he realizes?

Publisher's Note: This story has been previously released as part of the Hard Riders anthology by Totally Bound Publishing.

“Zero, that sweet piece of ass I gave a Prince Albert to a few weeks back is here asking about you.”

Luc ‘Zero’ Villarojas grunted then took a strong pull of his longneck beer. He never drank any of the brews that were on tap at Road Rage. He liked the feel of the bottle in his hand, liked the way his large fingers could wrap around the smooth glass. The fact that it also came in handy as an occasional weapon at the Mojave Sidewinder’s biker bar only added to its appeal.

After taking another healthy swallow, he regarded his Sidewinder brother, Tank. He was Zero’s piercer and body mods guy at Zero to Sixty, the tattoo parlor he owned and operated in Indio, right off the interstate past Palm Springs. Tank’s real name was Sherman, but since he was built like a formidable military vehicle, the nickname had glued itself to him the way leathers would to skin when the heat reached intolerable levels.

“Why should I give a fuck?”

Tank snickered. “That was one pretty cock. He let me get it nice and hard for the piercing.” Tank licked his lips. “Ever since I finished it, I haven’t been able to stop thinking about sticking my tongue through that ring in his tip and giving it a little tug.”

Zero shrugged then finished off his beer in three long gulps. He wiped the back of one of his big hands across his mouth as he banged down the empty bottle on the bar.

Zero gestured with his index finger, and Fuzzy, the big bear of a bartender that ran the joint and tended the bar for the club, ambled on over. His mammoth salt-and-pepper beard was divided in half, the two ends braided. They reached down to the middle of his cut and there were rumors that he hadn’t trimmed it in over thirty years.

“One more, Fuzzy. Tank? You drinkin’ or tonguing dick?”

His friend let out a loud snort. “If things go my way, both.”

After collecting his second beer then leaning back against the long, scarred wood counter, Zero faced the main section of their hangout. He saw the piece of ass Tank had mentioned. The almost-too-pretty man stared unwaveringly at him. He had a nice lean body, toned, well-inked—pierced nipples, and of course, what Zero knew to be his most recent piece of body jewelry that was undoubtedly pressing against the zipper of his tight denim. He was the kind of guy Zero liked to stick his dick into—smaller than him, a hungry little bottom. But he was also smug and overly aware of how he had all the men’s cocks dripping when he walked in the room. Plus, Zero had already fucked him. Once was usually enough for him with anyone.

“You gonna tear that ass up or what?”

Tank smirked. “Let me guess. You drilled him already.”

“Through the floor.” Zero took another swig of his beer.

Tank shrugged. “I’m not proud. I’ll offer to break in his guiche for him.”

Zero turned to Tank, pulling his eyebrows together. “I don’t remember Pretty Boy’s taint being pierced.”

Grunting, Zero broke his gaze from Tank’s prey, his attention captured by a disturbance near the entrance to the club’s hang. He absent-mindedly wondered if a couple of chicks were trying to weasel their way in. Or maybe it was some tourists who didn’t realize that Road Rage belonged to the Sidewinders, and that the club was not only exclusively for men, but for gay men.

Zero is a wonderful guy, and Dylan is beyond adorable. I would love to see more of them, and I wish this story had been longer.

Share what you thought about Biking Bad and earn reward points.

Morticia Knight - ARe Cafe Pick of the Week

Biking Bad has been chosen as Pick of the Week at ARe Cafe.

When I lived in the San Jacinto Mountains right above Palm Springs, California – there was a highway that wound up from the desert floor. Highway 74 is an amazing scenic ride with lots of twists and turns that ends in the picturesque town of Idyllwild. Even Brad Pitt used to ride his bike there and one of the locals had his picture taken with him when Brad stopped by his convenience store for a pack of cigarettes.