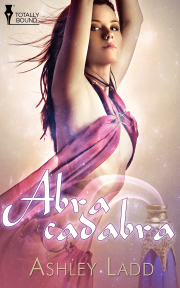 Savi Davis never believed in genies until she became one.

When Savi finds a beautiful bottle, she wishes for the man she loves to be proven innocent and released from jail.

To Savi's shock, a genie fulfils her wish. Then all hell breaks loose…

Savannah ‘Savi’ Davis warmed up for her Tae Kwan Do session by doing forty jumping jacks, followed by forty push-ups, then forty squats and finally forty leg lifts. Then came the leg stretches. How she used to hate the way they seemed to tear her muscles, how they made her cringe in pain, but now that she was getting limber, she loved to stretch her legs far and wide, almost straight out like a karate master. Dreams of achieving her black belt aside, this exercise not only helped her to kick higher and harder, it helped her to stretch in incredibly hot sexual positions.

Although Mark wasn’t here, memories of him still made her wet. At least her panties would be wet…if she wore any. At times like this when she missed her lover with every molecule of her being, she didn’t choose to wear panties, just her white cotton slacks. If some hottie saw the shadow of her bush, the slit of her pussy, it only made her sizzle hotter. Sometimes just their hot, lustful looks made her come without Mark’s huge cock rocking in and out of her or even the aid of her own fingers.

The slightly scratchy material, in particular the inseam, rubbed against her clit and she threw back her head and moaned in delight. Her long hair caught back in a high ponytail tickled her back, especially the bare midriff where her T-shirt hiked up.

Mr. Lee, her Tae Kwon Do instructor, tossed her a warning frown and she caught several classmates sneaking furtive glances at her in the floor-to-ceiling mirror that displayed the entire studio. She didn’t care if the women’s glances held censure for the men’s held anything but. They reminded her of Mark’s sweltering stares, his burning eyes and his hot and ready response. God, she missed her Mark.

She loved the Tae Kwon Do studio, in particular because she’d met Mark here when she started her karate training. He’d been her first partner and as a second-degree black-belt, he’d given her private tutelage, sometimes even after hours at the studio as he assisted the master. This place was a storehouse of awesome memories.

A soft, dreamy smile curved her lips. Lost in her own world, she continued her stretching exercises as if on auto pilot.

“The other right, Miss Davis,” Mr. Lee called out just like Mark used to, when she rolled into her neighbour’s space.

Mark… Everything reminded her of her Mark.

She shot an apologetic smile to the green-belt scowling at her, then moved back into her own space. Still, she had trouble getting her mind off Mark.

Closing her eyes, she pretended Mark was beside her. The scent of musky sweat permeating the studio and infusing her uniform, and the steady, sexy beat of the workout music, all worked together to enhance her mesmerising fantasy.

She forgot where she was as she slipped into another world, to one where she and Mark, who had been her first Tae Kwon Do master, had the studio all to themselves, where they gyrated in time to the beat of the sensual music belting through the studio. She recalled how they performed their own quasi-Tae Kwon Do routine, part karate, part animalistic dance.

Share what you thought about Abracadabra and earn reward points.