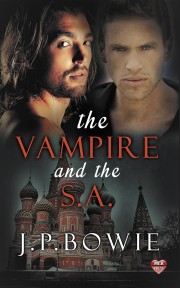 The Vampire and the S.A.

Special Agent Bryan Walker is both excited and apprehensive when the director of the F.B.I.'s paranormal division chooses him to partner with vampire Viktor Karnov on a mission in Russia. Viktor is a legend within the ranks of the F.B.I., a perfectionist and a loner, and unimpressed with Bryan's lack of field experience. The two don't exactly hit it off on their first meeting, but after a forced trial run Viktor agrees to partner with Bryan. In Moscow they face a cabal headed by Alexander Krychev that threatens to bring down President Petr Volstoy, a democratic leader who has reinstated civil rights for minorities, and whose lover is vampire, Louis Cadinot. Viktor and Krychev are old enemies, Krychev being responsible for Viktor's only failed mission, and the death of friends. To add to the chaos, Viktor recognizes Bryan as his destined mate but fights the primal need to claim him because of the danger that surrounds them, and his pledge to bring Krychev to justice. However, sometimes Fate has its own way of stacking the deck, and making sure that no matter what the odds, the winner takes all.

Share what you thought about The Vampire and the S.A. and earn reward points.