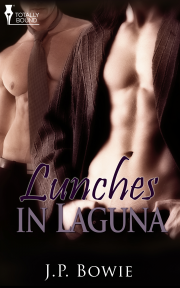 Scott is intrigued by an art collection in a Laguna gallery, but it's the gallery manager, Michael, who gets his full attention!

By his own admission Scott Stevenson is a rough and ready kind of guy, but even he can appreciate art on occasion, especially when it comes in the form of Michael Taylor, the manager of a Laguna Beach art gallery. Invited to spend a lunch hour with Michael, Scott doesn't hesitate to let his new friend know he considers him a perfect work of art.

The attraction is mutual and the two men start seeing each other regularly for 'lunch'. But when Michael fails to show up at the gallery one day Scott discovers that his perfect man may have an imperfect past, and if Scott wants lunch to progress to dinner he'd better ensure that those who are threatening Michael aren't around for dessert!

One thing among the thousand things I love about living and working in Laguna Beach is the perfection of the weather on a day-to-day basis. Sure, there’s the occasional gloomy day when a cloud bank from the Pacific Ocean rolls in, but by noon the sun has usually burned through and the temperature is, as I said, perfection.

So it’s no surprise that I love taking my lunch outside the office, strolling through the streets lined with art galleries, restaurants and gift shops, grabbing a sandwich from the bakery and finding a quiet spot on the beach where I can watch the boys play volleyball, shirtless on the sand.

Another thing I love about Laguna—the plenteous supply of eye-candy. Some of the most beautiful men in the world either live here or flock to this quaint little town for vacations or weekend breaks. During the summer, there are more recorded fender benders than most anywhere else in the US. The reason? Eye-candy, so distracting to male and female drivers alike. The heavenly vision of a tall, tanned and lithe body clad only in shorts slung so low you can see the crack of a delicious ass has been the cause of many a rear-end bump—pun intended. Fortunately, the only resulting casualty is usually the red face of the driver. I know—I’ve almost been there, done that myself, on a couple of occasions.

Anyway, there I was, Scott Stevenson, twenty-nine years old, single and without a date in almost five months, strolling down Forest Street just before the noon hour, when I spotted him, and boing!—I stopped dead in my tracks. Gawked is the word used to describe what I did at that moment—I gawked at the man standing in the doorway of an art gallery talking with an older couple. It was his smile that got me first, radiant and lighting up his face. Wreathed in that high wattage smile, he was simply stunning.

I stepped back, pretending to look in the window at the art studies displayed there. All the while, I watched him from the corner of my eye, taking in the whole package—tall, wide shouldered, wearing a pale blue dress shirt open at the neck and white linen pants.

Lunches in Laguna's interesting setting, developed storyline, plot and characters made the story a fast read with no hidden bumps along the road. As always, J.P. Bowie has delivered a story you...

Share what you thought about Lunches in Laguna and earn reward points.