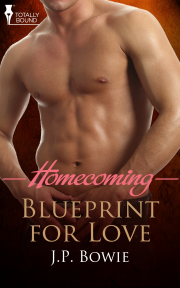 Homecoming Valentines Collection, stories of love lost and love found: "If you love someone, let them go. If they return to you, it was meant to be. If they don't, their love was never yours to begin with…"

A chance meeting in the rain on Valentine's Day leads two men on a path of discovery, jealousy and love.

Kyle Rutherford is literally bowled over by architect, Mason Alexander, while waiting in the rain for a taxi outside Los Angeles airport. Despite ending up in a puddle on his bottom Kyle accepts Mason's invitation to dinner - after all, until that moment, he was dateless on Valentine's Day.

The two men are quickly attracted to one another and continue to date until Mason lands a lucrative contract, designing and building a custom home in Dubai. It means he'll be gone for several months, but before he leaves he asks Kyle to move into his apartment. Seeing this as commitment on Mason's part, Kyle happily agrees, but his contentment is rudely disrupted when Jake, Mason's ex, shows up with stories of Mason's dark side. Kyle's disillusionment is compounded when Mason tells him he has allowed Jake to move into the apartment.

Kyle moves out, convinced that the next Valentine's Day will be the worst one ever.

1.6em;">"Ladies and Gentlemen, we are beginning our descent into the Los Angeles area."

At the sound of the flight attendant's announcement, Kyle Rutherford shifted in his seat and gazed out of the window at the dark clouds covering the city below.

"The captain has informed us that there is currently a thunderstorm over LA, and there may be some turbulence as we descend, so please ensure your seat belts are securely fastened."

Great, Kyle thought, it's pissing down rain and Jen can't meet me. His sister had called just before he'd left Cincinnati to tell him her youngest daughter was sick and she couldn't leave her alone to get to the airport as planned. Hope there's a cab available. At least, rain was preferable to the weather he'd just endured in Cincinnati.

He'd spent a week with his parents as a sort of penance for not being in touch more often. His mother's constant harping about that fact had finally given him the guilt trip she'd intended.

"I mean, Kyle, Jen manages to come twice a year—and brings the children."

So he'd groaned inwardly and arranged for a week off from his job. He'd rather have flown to Hawaii, but truth to tell, he'd actually enjoyed his time with his mom and dad—despite the shitty weather. Unlike a lot of his gay friends, Kyle hadn't suffered from parental shame and horror when he'd come out—his mother's only lament had been that she'd wanted him to supply her with more grandchildren. Turned out both his parents had known he was gay for some time before he'd told them.

"Lack of a steady girl," his father had grunted. "Dead giveaway."

Lack of a steady boyfriend too, Kyle had thought wryly. Over the years, that hadn't really changed. Yes, there had been boyfriends, just not steady ones. Kyle had come to the conclusion that 'steady' was not in the vocabulary of most men he'd dated. That was the reason he'd be dateless this evening-Valentine's Day evening. How pathetic was that?

Blueprint for Love is a charming Valentine's story about love, romance and second chances.

Share what you thought about Blueprint for Love and earn reward points.