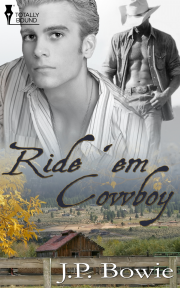 When Royce Chandler first claps eyes on his father's ranch foreman, Parker Jones, it's lust mixed with dislike at first sight. It seems that Parker has nothing but disdain for the young law graduate. But all that changes when Parker is thrown from his horse and Royce accompanies him to the hospital.

What follows is a realisation of their mutual attraction, and a desire to spend the rest of their lives together; maybe get a ranch of their own. Then Royce's dad tells Parker that his son is about to turn down a juicy offer from a big law firm in Los Angeles. Parker knows the reason - him - and he takes strong action to convince Royce he's making a mistake by not taking the job.

But his actions tear the two men apart, leaving Royce to wonder, how could Parker's love for him have faded so suddenly?

“Yeehaaa!” The exultant cry from Parker Jones carried across the corral as the bronco beneath him bucked and pranced like coiled wire come to life.

Royce Chandler, leaning on the corral fence, one foot planted on the second rung, rolled his eyes and looked sideways at the man standing next to him.

“He just loves himself, doesn’t he?” he remarked to the older man who stood steadily chewing on the plug of tobacco in his mouth.

Jim Ballard gave him a cursory glance. “He’s pretty darned good though,” he muttered. “Knows how to ride ‘em.”

He’s pretty all right, Royce thought, feeling his cock twitch at the sight of Parker’s perfectly round bottom bouncing up and down in front of him. Too bad he’s such a big-headed jerk...

“Whoa!” Jim let out an involuntary cry as Parker was thrown into the air, his arms and legs revolving like a helicopter in distress. He landed with a sickening thud on the hard, beaten-down ground and didn’t move. A couple of ranch hands dived in to stop the bronco’s dervish-like dance.

“Shit,” Royce muttered, feeling a flicker of alarm when he realised Parker wasn’t getting up or even moving.

Vaulting over the fence, he ran to where the cowboy lay flat on his back.

“Jones!” Kneeling by the cowboy’s side, he jostled his shoulder. “Jones? You okay?”

Jesus... Royce looked up at the other men who had gathered around. “Aldo, call 9-1-1. Get an ambulance out here.”

As the young ranch hand ran to the house to make the call, Royce felt the pressure of his cell phone in his jeans’ back pocket.

“Shit, what was I thinking?” he muttered, pulling it free and dialling 9-1-1.

Parker opened his eyes and squinted up at him. “Gotcha all in a dither, ain’t I?”

Royce narrowed his eyes at the other man. “You better not be faking this, Jones.”

The cowboy winced. “What? You want me to have a broken back?”

“No...of course not. Oh yes—” Royce directed his attention to the emergency operator. “We need an ambulance out at the Double ‘R’ Ranch. Man with an injured back...” He paused for a second. “Could be broken. Please hurry.”

Royce became aware of the other men’s shuffling movements around him. He looked up sharply. “You guys can get back to what you were doing. I’ll stay here with Jones ‘til the ambulance arrives.”

With a certain amount of relief, the ranch hands dispersed. Standing around, looking at an injured man in pain was not one of their stronger points.

Royce looked down at Parker. “Hang in there,” he said quietly. “It won’t be long before the ambulance gets here.”

“Hurts like the devil,” Parker muttered. “Guess I was too darned cocky ‘bout tamin’ that colt.”

Royce took his hand and squeezed it gently. The man’s work-worn hand felt so good in his. “You’ll be fine. You’ll be up and riding him again before you know it.”

“You’re bein’ awful nice to me.” Parker gave Royce a lopsided grin. “I always figured you had no time for me.”

“You’re one of my father’s employees, Jones,” Royce said tersely, trying to ignore the effect Parker’s blue-eyed stare had on him. “So, obviously I care about your well-being.”

For a long moment, the two men remained immobile, gazing deeply into each other’s eyes. Then Royce cleared his throat, removed his hand from Parker’s grasp and stood up.

“Where the hell’s that ambulance?’ he muttered.

“Come with me,” Parker said quietly from his prone position at Royce’s feet.

“Come with me, please. When they take me to the hospital, I want you there...with me.”

Royce looked down at Parker, then knelt again by his side. “Okay,” he whispered.

Royce felt as though he’d been sitting in the waiting room all night. Glancing at his watch, he realised it had only been an hour. What was taking them so long, for Pete’s sake? He just wanted to know Jones was going to be all right so he could go back to the ranch and tell his father not to worry. His dad always worried when one of his hands got hurt. He’d already called four times wanting an update.

“They haven’t finished X-raying him yet, Dad,” Royce had said over and over. “I’ll call you when I have some news.”

He looked up as a doctor approached him. “Mr. Chandler?”

“Pretty good. Nothing’s broken. Helps he’s young and in such good shape, of course, but he’s going to be in pain for some time, and we’re going to keep him overnight for observation—just to make sure there’s no internal bleeding. Are you a friend of his?”

“He is?” Royce forced out a laugh. “Probably wants to know he still has a job.”

Jeez, he thought, wincing. Did that sound crass or what?

“Yeah, I expect he does.” The doctor gave him a cool look. “Well, why don’t you go on in so you can put his mind at ease on that score? He’s in room two-eleven.”

Feeling like a jerk, Royce walked down the hall to Parker’s room. He stood for a moment outside the door, then taking a deep breath, he pushed the door open and walked in.

A Reviewer Top Pick! This was a very emotional read. The author did a fabulous job conveying the physical and emotional aspect of Royce and Parker's relationship as it blossomed and grew...A true...

Share what you thought about Ride 'Em Cowboy and earn reward points.