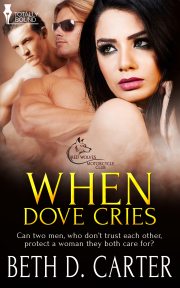 Can two men, who don’t trust each other, protect a woman they both care for?

John Draven is vice president of the Red Wolves Motorcycle Club. While on a special run, he meets FBI Agent Cadence Vanaker again. Cade is the man who killed his cousin five years ago and the person he hates more than anyone. Now John is forced to work with him to take down a human trafficking ring operating in John’s hometown.

Cade wants more than anything to tell Draven he wasn’t the one who really killed his cousin, but he can’t reveal the truth and has to live with Draven’s hate as a result. When the two men find a woman half-dead and bound with zip ties, they both feel a need to protect her—and the need to be her only man.

Dove Aldrin is a sensitive young woman who was abducted and held prisoner. When she escapes, she falls into the path of two men determined to help her and to find the man responsible for treating her so cruelly. What she didn’t count on was falling for both John and Cade. How can she pick one over the other, especially when the two men despise each other?

Draven led the way back to Destiny the whole way from Vegas even though he didn’t like having the FBI agent at his back. But it seemed like Cade Vanaker didn’t trust him either. They’d been at a standoff for a whole day until he’d realized all he wanted to do was get home. He had to be a great actor, too, because Skids had believed him about his newfound nomad friend and had sent him back to Destiny with a cheery wave before he’d disappeared into the drunken delights of pussy galore.

They probably wouldn’t see Skids again for a few months.

He was just a few miles from home when he rounded a bend and saw a battered and bedraggled woman reaching out to him. He hit the brakes hard and flipped out the kickstand all in one breath.

“Call nine-one-one!” he shouted to Cade as he raced to the woman. She looked sick and thin, to the point of gaunt. A zip tie had broken into the skin around her wrists. The wound oozed a mixture of blood and pus.

But her eyes fluttered closed, and she fell limp in his arms. While Cade called the authorities on his cell phone, he moved her to the shoulder of the road. Then he knelt and cradled her as he reached for the knife attached to his belt. Carefully, he cut through the hard plastic that held her wrists together. The infected skin looked awful. In fact, there wasn’t one bit of her that didn’t look battered. Dark smudges encircled her eye sockets. Her mocha-colored skin lay sallow over her protruding cheekbones. Mud matted bits of her black hair together. She smelled like old mold, and she shivered, even in the warm sunlight. A fierce protectiveness surged through him as he held her, and he knew he’d be damned if he let anyone or anything else harm her.

Cade ran up next to him. “Ambulance is on the way. Holy shit, she looks bad. Do you know her?”

Cade withdrew his gun from his back holster. “I take it you have a gun?”

Draven shifted the woman a little to grab his pistol from his shoulder holster. “Flip the safety off for me.”

Cade cocked an eyebrow. “If I do that, will you promise not to shoot me?”

Cade twisted his mouth sourly, but he went ahead and flipped the safety off. “Take care of her,” he said. “I’m going to go check it out, see if there’s anyone else.”

For the first time since meeting the FBI agent, Draven didn’t feel the need to punch the guy. In fact, he was almost relieved to have him go check things out. He looked down at the woman in his arms. He couldn’t determine her ethnicity, although she looked Indian from India. The rapid beat of her heart fluttered wildly in her neck, and he caressed his thumb across it soothingly.

Who had done this to her?

Was she a victim of the human trafficking ring Cade had told him about? If so, dear God, it was real. Part of him hadn’t believed Cade. He’d thought the man had his facts all wrong. But this—holy shit!—he couldn’t ignore. This woman had suffered right under the Red Wolves’ noses. He made a silent vow to her that he’d watch over her, however long it took for her to recover.

A few minutes later, the wail of an ambulance rent the air. He rose, easily lifting her. She hardly weighed anything. He simply stood staring down at her gaunt features and urged her to keep breathing, not to give up. As soon as the ambulance pulled next to him and the medical people jumped to take her from him, he evaluated each person. He couldn’t trust anyone, even the EMTs, because there were sick fucks everywhere. What if one of them was her abductor?

Reluctantly, he placed her on the gurney.

Immediately, they got to work on her, checking her vitals and setting up an IV. Their ministrations must have revived her because she reached out and he took her hand in his, her grip frightfully weak.

He bent down to whisper in her ear. “I’m here, sweetheart. I won’t leave you.”

“Dove,” he repeated. “I’m Draven and I’m going to protect you. Just get better, okay?”

His words seemed to be enough for her to relax her grip, and the minute he stepped back, the EMTs swooped in. Just as they loaded her into the back of the van, Cade emerged from his investigation.

“What did you find?” he asked.

“I’ll tell you at the hospital,” Cade answered. “Come on, let’s follow. We need to watch over that girl.”

Cade approached the old mill with caution. All his senses were on alert as he glanced in every direction to make sure no one was going to jump out and take a swing. The birds sang merrily in the trees while the river gurgled nearby, and he slowly came to the conclusion that he was alone. He relaxed only marginally as he made his way to the entrance of the mill.

The building looked to be over a hundred years old, and what was holding it up, he couldn’t tell. Inside he saw an open cellar door going down into the dark and dirty footprints coming from it, so he cautiously approached the dark depths. A stairway went down into what looked to be a sub-basement. Step by careful step, he descended. Wood creaked. He wondered if they were getting ready to collapse. After all, he wasn’t a dainty thing. Coming upon a chained door with a small hole kicked out at the bottom, a sick feeling gripped his stomach. Training and experience told him that this was where the girl had been kept, and his jaw clenched when he saw fresh blood on the rough timber around the hole.

Share what you thought about When Dove Cries PRINT and earn reward points.

Other Books by Beth D. Carter
Even more stimulation for the imaginationView Author Bookshelf