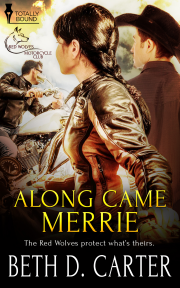 Merrie stumbles into a bad situation, forcing an outlaw motorcycle gang to ‘deal’ with her, but her escape leads her into the arms of two incredible men who change her life forever.

Merrie Walden is in the wrong place at the wrong time. When she sees something she shouldn’t, she’s attacked by a vicious outlaw biker bent on shutting her up—permanently. She escapes him by jumping out of a moving car. Luckily, horse rancher Braden McClintock finds her and takes her for medical attention to his adopted brother, Leo Cloud Dancer.

As she heals in the men’s home, Merrie realizes that she’s falling for both men. Braden is taciturn, while Leo is outgoing—both reaching a deep-seated need in Merrie that she never knew she had.

However, the outlaw biker has discovered her hideout and even if she doesn’t know what she witnessed, he sure as hell does—and he wants her silenced. Will Merrie have a chance to have a happily ever after with Braden and Leo?

Merrie eased up on the gas when she finally accepted the truth. She was lost. Miles from nowhere, she looked down at her gas tank light flickering dangerously low. She dug around on the passenger seat until she found her phone then illuminated it to check her bars.

Story of her life—dead end jobs, dead end future. She’d been taking care of herself since before she should’ve and the only job she’d been able to get at age fifteen was working on a dairy farm. It was nice but it didn’t pay all that much, and she’d gotten tired of her ass being grabbed each time she came by with the coffee carafe. The idea of moving to Cheyenne had sounded good at the time but now—lost in the middle of Wyoming—somehow it didn’t seem all that smart. Why was it that none of the roads had marker signs?

She’d gotten turned around at that last pit stop—that’s what had happened. Too many roads branched out for the truckers and she’d become confused about which road she’d been on. She was always doing stupid things like that. How hard was it to follow a road?

It only added to the melancholy lingering in her soul. She had wanted to start over, begin a new chapter in her life, so she’d donated most of her stuff to charity, keeping only the items that were important. It had depressed the hell out of her when she’d discovered all her worldly possessions had fitted in her trunk. It wasn’t as if she’d had a happy childhood full of memorabilia and crap. Hell, she’d barely graduated high school.

A glow in the distant sky lifted her spirits. A glow meant people, civilization. Hopefully it also meant a gas station or maybe someone who had information on how far the next one was—and food would be a plus. She hadn’t eaten since the truck stop a few hours ago.

She pressed harder on the gas pedal. The quicker she reached the lights, the quicker she’d get back on the right track. Merrie kept her fingers crossed that she wasn’t too far from her destination. Who knew driving could be so exhausting?

Her focus stayed on the lights and, as she grew closer, the shape of a large barn converted into a bar drew closer. Dozens of motorcycles surrounded it, big silver and black monstrosities that pushed a slither of unease down her spine. The only bikers she’d really heard of were the made up ones on television and they were dangerous bad asses. Plus, being a woman had her naturally distrustful of bars. There were too many horror stories where a girl went into a bar never to be seen again, and this one held bikers. She slowed upon noticing an old public telephone booth toward the back of the building. Never mind that it belonged in a museum—relief poured through her. She wouldn’t have to go inside to ask for directions. She could simply call the police to help her.

Merrie flicked off her headlights as she pulled into the parking lot then headed around back near the telephone booth. She didn’t see anyone, so she turned off her car and opened the door. Getting out, she looked around and took a step toward the call box when she heard a man laugh. She swung around. In the shadows of the building, two men talked and shook hands. They wore leather vests with many patches on them but one of the men had a band of red running along the bottom of his while the other didn’t. The second man faced her, the patch on his vest white with a red devil and two Ds on it.

Suddenly, the bearded man who faced her turned his head and looked directly at her. He tapped the other guy on the shoulder and he spun on his heel too. The second biker, his goatee cut close to his chin, glared at her like she was something disgusting on the bottom of his shoe. Seriously creeped out, Merrie debated if she should get back in her car and just leave. The telephone stood only a few feet away. Without knowing where she was, she had no way to judge how far the next gas stop would be. Did she really want to be stuck out in the middle of nowhere? Mind made up, she pushed her misgivings away as she hurried over to the phone.

She picked up the receiver, heard a dial tone and breathed a sigh of relief. It worked! She dug in her jeans pocket for some coins and was just about to put them into the phone, when a hand twisted in her hair and pulled sharply. Needle-like pain pricked her scalp and Merrie raised her hands instinctively, trying to alleviate the throb. The phone receiver fell to dangle at the bottom of the phone box.

The man holding her hair jerked her away from the phone booth. He twisted his hand, bringing her head up so she stared into his face. Tears flooded her eyes.

“Who are you?” he demanded.

“Let go of me!” she yelled, trying to free herself. This wasn’t the first time she’d dealt with this type of torment. Her mother had liked to hurt her whenever she was in her drunken rages.

The biker backhanded her. White-hot heat exploded in her cheek as the force of the hit spun her around. Dirt filled her mouth as she landed hard on her front and tears filled her eyes when her nerve endings processed the pain. Fear replaced every single coherent thought and instinct in Merrie’s mind. She pushed herself up and glanced at the man, holding her hands out in a pleading gesture for him to leave her alone.

“I asked who you are,” he said coldly. “I didn’t ask for a fucking attitude.”

“M-my name is M-Merrie,” she whimpered, spitting out dirt and blood. Her teeth had cut the inside of her mouth. “P-please don’t hurt me.”

“Merrie. Well, Merrie, who were you calling?”

He grabbed her arm and yanked her up to stand in front of him. He bent her arm behind her until she whimpered and tried to pull away, but his grip was too tight.

“Now why don’t I believe you?” He shook her. “Were you calling the club? Are you someone’s old lady? Or just a fucking spy?”

“Who were you calling?” he demanded again. This time he brought his hand back in a fist.

“The police!” she cried, cringing.

He leered in her face. The stale stench of cigarettes and the sour fermentation of beer on his breath activated her gag reflex. But she swallowed down the bile. “I’ve got the police in my back pocket, you stupid bitch. They can’t help you.”

“I’m lost,” she whispered, closing her eyes. “I swear. I was just calling them because I’m lost!”

“Well, shit,” someone else said.

Merrie cracked her eyes open. The other man with the gray beard looked at her with a mixture of pity and resolution. Her heart pounded as fear skyrocketed to terror and she knew her life was in jeopardy. Once again, she tugged her arm, trying to break the tight grip on her wrist.

“You fucked up, Axe,” the bearded man said. “And I don’t know if she’d have someone come looking for her.”

“Make sure no one finds her body.”

“No!” Merrie screamed. “I won’t tell anyone anything. I swear. I-I’ve never been here. I don’t even know where I am. Please don’t hurt me. Please!”

“Shut up,” Axe snarled. He drew back his fist again and smashed it into her face.

Her vision faded and she gave in to the beckoning darkness.

Along Came Merrie, is an action packed romance I read in one sitting. The dynamics between the three characters was phenomenal. They battled their way through the complexity of a polyamorous relationship in...

I really enjoyed this story. The sex was sizzling and despite the relationship developing rather quickly, it didn't feel all that rushed. I enjoyed the strained relationships, the an...

Share what you thought about Along Came Merrie and earn reward points.