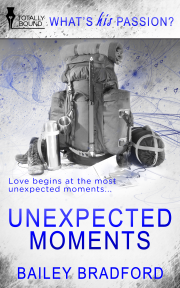 Love begins at the most unexpected moment…

Carter Hausemann and Eddie Canales are embarking on a new romance. They know they’re compatible sexually. Now it’s time to find out if they’re meant for each other—and a third man, because Carter has always known what he’s needed. He’d just been afraid to reach for it.

Eddie will do whatever it takes to make Carter happy, and since he’s not the jealous type as long as he’s included, he’s more than willing to see if a relationship can work between three men. But first he and Carter need to concentrate on them.

Dare Habrock has the microbrew everyone’s talking about. He also has a secret that has kept him from having a lover in far too long.

When these three meet, they begin to understand that love flourishes in the most unexpected moments.

But someone is determined to destroy every bit of joy they have.

Carter tugged at his shirt cuffs. He shouldn’t have been as nervous as he was, but his heart fluttered and his pulse raced. He touched his tie. Reassured it was straight and that he was as attractive as possible, he entered the restaurant.

The host glanced up at him and smiled warmly. “Good evening, sir. Are you meeting someone or dining alone?”

Carter’s cheeks warmed. “Er, meeting someone. Carter Hausemann is the name the reservation is under. Another gentleman, Mr. Canales, will be joining me shortly.” I hope.

The host nodded. He ran his finger down a paper in front of him then checked Carter’s name off it. “There you are, right here. Very good, sir. I’m Rogelio and I’ll be seating you tonight. Follow me, please.”

There was no reason for him to be so edgy. He’d spoken with Eddie the night before and confirmed their plans. Still, Carter kept thinking, what if. They didn’t really know each other, besides having had sex a few times.

“You could seat us both.”

Carter turned and couldn’t keep back a smile when he saw Eddie standing there. “Hey, you made it.” He immediately felt like a fool for saying that. My insecurity must be showing. “You look good,” he added, before Eddie could respond.

‘Good’ was an understatement. Eddie was sexy as hell in a black suit and blue shirt. No tie for him, which was fine. Carter liked the dressy-casual attire on Eddie almost as much as he liked him in leather or naked. Not quite, though.

“This way, sirs,” Rogelio said. “I have the perfect table for you.”

Carter gestured and waited for Eddie to step in front of him. Eddie gave a slight shake of his head. “No, after you.” He leaned forward and whispered, “I want to watch you walk and see your cute ass move beneath that jacket. Think about what I’m gonna do to it, and you, later.”

Carter sucked in a shaky breath as he flushed hot from his head to his feet. He couldn’t meet Eddie’s gaze or else his burgeoning erection might turn into a full-blown hard-on that even his suit jacket couldn’t hide. Carter stepped back then turned to follow Rogelio.

Rogelio led them to a table set in the back corner. They were more secluded than if they’d been seated elsewhere, and Carter appreciated the privacy. “Thank you,” he said, taking his seat.

Rogelio winked at him. “It isn’t always easy in this town for men like us to have a romantic date.”

There was no point in denying that he and Eddie were on a date. Rogelio wasn’t likely to bash them, though Carter did understand the need for discretion in Odessa. As much as he’d like to be able to touch Eddie and kiss him if the mood struck, they couldn’t be as free in public as straight couples could.

Eddie murmured a thank you to Rogelio.

“Mathias will be your waiter this evening. Can I start you off with one of our wines?” Rogelio handed them a thin drink menu, followed by the larger meal ones.

Carter and Eddie took them.

Carter deferred to Eddie. “Would you like to order, or…”

Eddie grinned. “I’d really like a beer, to tell the truth.”

Rogelio took the wine listings back. “We have the usual line up—Bud, Bud Light, Miller and so on, or we have an excellent local brew, Dare’s Pale Ale. It’s been getting rave reviews. Dare’s also has a stout that I would highly recommend.”

“Very good, sirs. Mathias will be right over with them.” Rogelio left them.

“It’s good to see you again,” Eddie murmured, his gaze burning through Carter’s nervousness. “It might seem too soon to say but the truth is, I’ve missed you.”

That confession eradicated the rest of Carter’s unease. “It’s not too soon. I feel the same way.”

Eddie shifted in his seat, leaning back and resting his folded hands on the table. “I wasn’t sure. You seemed kind of uptight when I got here.”

“I was afraid you’d change your mind.” Carter rolled his eyes and groaned. “And now you know how insecure I am. Sorry. I swear I’m not usually so immature.”

Eddie chuckled and surprised Carter by reaching across the table to hold his hand. “I worried you’d realize I’m just not good enough for you, so let’s both admit we have faults and let it go. You’re here, I’m here, and for what it’s worth, I can tell you I never once thought of not showing up. You’ve been on my mind every day since I saw you two weeks ago.”

“Oh.” Carter was so pleased he figured he was beaming. “Same. I… This starting a new relationship thing is complicated.”

“It’ll be worth it.” Eddie released his hand and sat back just as a waiter approached.

“Good evening, gentlemen. I’m Mathias and I’ll be your waiter tonight.” He set their beers on the table while he started naming off the specials, spending a solid minute extolling the virtues of the aged steaks that cost a ridiculous amount of money.

Carter’s mouth watered. He was going to splurge since he’d been anticipating this date for two weeks. “Thank you. We’d like a few minutes to examine the menu.”

After Mathias left them, Carter perused his options. “I think I’ll have the aged steak. How about you? No pressure, of course. I just want to try it once in my life at least.” And since they were going Dutch on the bill, he didn’t feel bad about ordering it, either.

Eddie hummed and didn’t answer right off the bat.

Carter liked the way he took his time and didn’t seem to feel rushed. He thought Eddie was enjoying their date so far.

“I’ve had it before,” Eddie finally said. “Not here, but at this place in Indiana. It was really good, too. So I’m hung up on ordering it or the surf and turf.”

Carter gave an exaggerated glance around them, then whispered, “You have to wonder about the surf part of that since we’re practically in the desert.”

“Daring enough to risk the chance of botulism?” Carter asked, arching a brow at him.

Eddie arched one right back. “I doubt that’d be a possibility here.”

“Probably not.” Carter had only been teasing, and Eddie’s expression let him know he was aware of it. “I’ve really been looking forward to seeing you again. It feels kind of weird being out like this after what we’ve done.”

Eddie’s smoldering expression had Carter’s dick firming up fully. “What we’ve done has led us to understand we want something more. Although, I intend to be doing more of, well…you.”

The cheesy line should have been laughable, but Eddie said it with so much sincerity that Carter considered forgoing their date to head back to his place instead.

“We know we’re more than compatible in bed,” Eddie continued, after a glance around. “That’s a huge thing in a relationship and so far, what time we’ve spent talking shows that we do well there, too.”

Carter didn’t want to be a downer, but he knew how it always started in relationships. Everyone was on their best behavior, trying to win the other person over and once they did… people changed. He’d done it himself, back when he’d been younger. Of course, he and Eddie were both older, so maybe they were more comfortable in their own skin so far. Plus, they’d met at a club and immediately hooked up with a third man to have sex with. Perhaps they didn’t have to pretend to be better than they were.

I found this book exceptional. Great storyline with an explosive plot. I don't read many menage books, I find them a bit tedious but this one was very tastefully written. There is a lot of sex scenes within...

This story had three very strong characters. Eddie, Carter and Dare. It was perfect the way Eddie and Carter worked at their relationship first, then looked for another to join.

Share what you thought about Unexpected Moments and earn reward points.

Today I’m blogging about people who inspire me, and that’s a Top-5 list! I do like lists, although not if they’re chores or bills. Those aren’t fun at all.

What's His Passion? is an imprint which delves into the passionate lives of compelling characters. How did you find writing about your characters' shared passions in this book?

I had a lot of fun exploring all three characters in this book. Their differences, fears, hopes-- all of those and more made each one of the guys unique. Writing a menage is always a challenge because of the potential for jealousy and misunderstandings, so clarifying what each man wanted, what he needed and expected, was very important here.