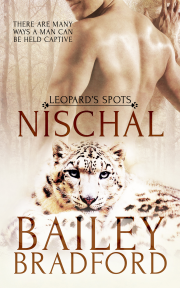 Book 9 in the Leopard's Spots series

There are many ways a man can be held captive.

Nischal and his brother Sabin were captured as snow leopards and have been kept medicated and half starved, put on display for crowds to view. The drugs that are supposed to keep the snow leopards docile also, as Nischal and Sabin discover, prevent them from shifting. After years of captivity, Nischal struggles to retain any kind of hope for freedom. He watches his brother die a little more on the inside every day.

Then one afternoon, a freckled red-headed man stands out from the crowd. Nischal doesn’t understand why, especially in his drug-addled state. When that man’s life is threatened, Nischal finds a strength within himself he never knew existed.

Preston Hardy’s brother went missing over a year ago. The local cops were no help, Preston’s parents didn’t seem to give a damn, and Preston was left to try to discover what had happened to Paul on his own. His research leads him to a skeezy travelling show, run by a man who immediately sets off warning bells in Preston’s head. When he sets out to follow the man, he doesn’t have a clue that his whole life and perception of the world is about to change.

And that is only the beginning of Nischal and Preston’s adventures as they try to find the truth about what happened to Paul and evade those who would capture the snow leopards again.

Reader Advisory: This book contains references to assault in regards to a secondary character.

"Snow leopards are endangered because they’ve been hunted for their beautiful coats and"—Suraj paused, a familiar, wry smile twisting his plump lips as he looked out over the small crowd he was speaking to—"because there are some very archaic beliefs that claim snow leopards are magical. Not as a whole, living creature, of course, but as minced-up parts."

Several of the people who paid to see endangered animals muttered and scrunched up their faces in distaste. Nischal knew just how they felt. Suraj made him want to vomit, too. One or two of them paled under the hot Texas sun that had flushed the cheeks of just about everyone out in it. Summers in south Texas were hellishly hot, especially around four in the afternoon or so. There was minimal shade for Nischal and his brother. For the gawkers, there was none unless they’d worn a cap. Even then, if they were facing Nischal, the sunlight was directly on their faces.

"We are very lucky to have this gorgeous pair of snow leopards in our facility," Suraj continued. "Their upkeep is entirely dependent on donations, so we thank you all for being as generous as you can be. After this educational tour, we’ll be returning Sasha and Bijay back to the large cat reserve built for them in Wyoming, so we are very pleased you have gotten a chance to see them now."

Nischal coughed, as close to snorting in disdain as he could manage. Suraj was a lying piece of shit. There was no place for him or Sabin—Bijay, as Suraj called him. Suraj didn’t know Nischal’s real name any more than he knew Sabin’s. He would never know the truth about them.

"These snow leopards you see today are especially rare with their white coats. Usually, if you were ever lucky enough to see a snow leopard, it would be a beige or yellow-coated one. These two beauties would be much sought after in Nepal, and not in a healthy way. For this reason, our association rescued them as babies when their mother was killed. We have protected them from poachers and are now able to share their beauty and history with you, here in America."

Nischal and Sabin exchanged bored looks. If they ever got the chance, Suraj would be dinner, or breakfast, or whatever meal they had missed. There were several, and Suraj would claim their thin forms were natural, but they weren’t. Under their thick coats, Sabin and Nischal were both little more than bones. Suraj fed them enough to keep them alive, and not much more. It made it difficult for them to have enough energy to do more than lie around and make the occasional noise.

Nischal would rather die than continue living like this. Sabin’s eyes held less and less life in them every day. Something was going to have to change.

Suraj kept talking, feeding the crowd lies mixed with just enough truth to make it difficult to discern which was which. He allowed a few people to toss over pieces of raw meat into their enclosure. Sabin rolled his head and looked at Nischal.

Nischal closed his eyes against the temptation. They both used to rush to whatever food was offered, but now… He was so hungry, but his brother had been fading before him, and if Nischal lost Sabin, he’d have nothing and no one left in this world. Nischal would just have to die first.

"How can we find out more about your…organisation?"

Something about that deep, rumbling voice pulled Nischal out of his hiding spot in his head. He cracked open one eyelid to see a short, stocky man with red hair and a smattering of freckles across his nose and cheeks tap his foot as he waited for an answer. An answer that he didn’t give Suraj time to come up with. "Because, frankly, I’ve never heard of the Big Feline Rescue Association of the World, and I do a lot of volunteer work with all sorts of animal rescue groups. In fact, I came out here because I’d heard things about this organisation." The man spat the word out like a mouthful of bad food. "We talk, those of us who care about animals, and no one can find anything other than a crappy webpage—"

"Perhaps because you haven’t looked in the right place," Suraj interrupted loudly.

That was his angry voice, Nischal knew it, and it made his hair stand up along his spine.

"If, after I finish answering questions here and the rest of the group leaves, you’d like to remain behind, I can answer your, er, questions." Suraj offered up a syrupy smile and Nischal’s stomach cramped from something other than hunger or sickness.

In the years that Nischal and Sabin had been held captive, Suraj had been confronted by more than one person too naïve to recognise the man’s cruelty. Suraj was a sadist and a narcissist, which might be the nicest things anyone could say about him. Nischal had never been sure whether the accusers left behind were dead or alive. What he did know was that Suraj did something to them that ensured they’d never bother Suraj again.

The red-headed man nodded. "I’d like that a lot, actually." Then he came closer to Suraj and held out a hand. "I’m Preston."

Suraj shook his hand and Nischal felt a strange tug in his gut. He wished Preston would come closer to the fence.

"I have to tell you, neither of those leopards looks healthy, either. If the proper authorities need to be notified—"

Suraj dropped Preston’s hand and slid a sympathetic look into place as he faced Nischal and Sabin fully. "You are very astute to notice. Sasha and Bijay are still adjusting to being brought over from Nepal. We were very much afraid Sasha in particular was going to be lost to us, but he seems to be recovering with the help of our brilliant Dr Yangani."

Nischal didn’t miss the warning look Suraj sent their way. He didn’t care about himself anymore, but Sabin—Nischal wanted him to be free. If it was the last thing he did, he’d find a way.

Preston shifted closer and Nischal’s attention was drawn to the man. The intelligence in his green eyes was obvious, as was the anger in them. There was something about him, something that was just more, though Nischal couldn’t figure it out. Years of being malnourished and abused had left him barely functioning at times. Still, he couldn’t help think that there was more to Preston beneath the surface of what he presented.

"Where is this Dr Yangani? I’d love to speak with her." Preston put his palms up to the fence and leaned in until his nose was poking through one of the openings between links.

Suraj’s jaw twitched as he darted a glance at Preston. "You are familiar with Nepalese names, to have recognised hers as a female one."

Preston cocked his head, but he didn’t look away from Nischal. Sabin got up and slowly made his way to the pieces of meat on the ground. "Familiar enough," Preston murmured so low that Nischal barely heard him. "My brother and I have several friends who are from Nepal originally. Met them in college. Great people." Preston licked his lips and curled his fingers around the fencing material.

Nischal watched that pink tip slick full lips and wondered how long it’d been since he’d been sexually aroused. Too long. He couldn’t manage it now, either, but he thought if he weren’t feeling half dead, Preston would be an interesting fuck. He’d probably have freckles on his shoulders. Nischal had never had a lover. He’d never had the opportunity. Snow leopards weren’t exactly in abundance, even before he’d been captured.

Freckles were interesting. He saw them on people, more on kids than adults. Women tended to cover them up with makeup, and Nischal couldn’t comprehend why. He liked freckles. His own skin had none, although his coat did have numerous black and grey rosettes…

Nischal lost track of Suraj’s scripted speech. People tended not to see past the slick surface of the man, and Nischal had long ago grown weary of watching them fall under his spell. A handsome face and a big smile seemed to convince people of what they wanted to believe anyway. He and Sabin knew the truth.

I love everything about this series. The series feature all of my favorite things: shifters, felines and sexy men in love with each other. I also want to add that I absolutely love the covers on th...

Share what you thought about Nischal and earn reward points.

This is book nine in the Leopard Spot series, so what can you tell us about the other eight?

Each book is about a different shifter and his mate. It began with Grandma Marybeth's grandchildren, but has since branched out to cousins and now, with Nischal, long-lost family that were smuggled over from the Himalayas. There is adventure and laughter in every story, along with some fun, kinky sex, and love, lots of love…