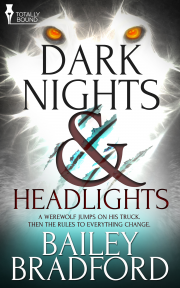 A familiar road can still be full of surprises.

Joe Jacek loves his life for the most part. All he ever wanted to do was be a rancher, and that’s what he’s doing. He feels bad that his father didn’t leave the ranch to him and his brother Trent both, but Joe would never short his brother out of his inheritance. Lucky for them, they’re close brothers. They like to hang out in the evenings, get stupid then get on with work the next day.

But it can be a lonely life. While Trent is a great brother, he can’t be everything for Joe, and vice versa. Joe would like to get laid sometimes, and living where he does, that’s a rare occurrence. So he drinks and does a little something else now and then. It’s all good—he’s just relaxing.

He knows the road between his house and Trent’s trailer like he knows his own soul. Turning off the headlights one night just to make the drive more exciting isn’t a big deal.

Until a werewolf jumps on his truck. Then the rules for everything change.

Publisher's Note: This book is a prequel to Texas and Tarantulas.

One of the good things about owning your own fairly decent-sized ranch was that you had a certain amount of freedom other people didn’t. You could walk around bare-assed naked in most places on it, let the grass grow crazy and not landscape for shit. You could have a pile, or piles, of rusty old equipment and trash that ought to be hauled off, buildings crumbling and in various states of disrepair, and you could do shit like what Joban ‘Joe’ Jacek was doing tonight—driving back across his property from his brother’s trailer, a little stoned and buzzed.

Joe didn’t have the piles of trash or the crumbling buildings, and being butt naked outside was just asking to be mosquito bait. He did allow himself to get a bit loose sometimes. He knew the dirt road going from Trent’s place to his like he knew his own dick. Joe was on pretty damn great terms with his dick. They’d been best friends for going on two decades now.

It wasn’t the first time Joe had made the drive in a somewhat altered state. Living on a ranch in the middle of Uvalde, Texas, Joe took his relaxation wherever he could get it. It was just him and Trent running the ranch, and at a little over a thousand acres, they were kept busy enough from morning until evening.

And there wasn’t Joe’s preferred kind of fun anywhere around. Sure, the creation of Grindr had helped some, and Craigslist—well, that one just scared the shit out of him as often as the pics loaded to it made him horny. But even Grindr couldn’t plop a choice of gay men down real close to the ranch, and Craigslist… Joe would just take a pass on that one. He’d seen the news stories about people using that media source to find victims and all. Plus, with his luck, he’d wind up having to pay whoever he met up with. Or he’d get mugged, beaten—something like that.

So he was feeling pretty good, tired and relaxed in a way he didn’t experience often. The truck bumped along down the road, and Joe figured he should maybe grate it again and try to smooth the ruts out of the dirt. It’d mean scheduling a day just for that, so he’d need to talk to Trent about it, see when Trent could take over his chores for the most part.

“Probably shoulda thought of that before I left his place,” Joe muttered to himself. He snorted. Trent was messed up and wouldn’t have been able to plan anything. He’d added tequila shots to his beer drinking and the pot smoking. Joe would be surprised if Trent wasn’t puking sick half the day tomorrow.

Joe just felt good. Calm and mellow and relaxed. It was almost as good a feeling as the sleepy, melty sensation following a fantastic orgasm.

As he drove slowly down the road, Joe was awed by the land at night. The moon was high in the dark sky. Stars sparkled overhead like millions of hopes and dreams just waiting to come to earth. The moon was incredible, big and so bright it almost made his eyes ache.

Joe wondered just how bright it was. Curious, he turned off his headlights. Then he braked, and blinked as white spots danced before his eyes. Once his vision had cleared, or mostly, he looked out of the windshield.

“Well, shit. It’s dark out.” And he was a genius. Joe snickered and narrowed his eyes as he leaned against the steering wheel. A little concentration and he could make out the road. Not very far, but yeah, a few feet or so in front of the truck.

He drove along like that, hunched over the wheel. His beater truck was too old to have airbags, so that was a worry he didn’t have. Joe concentrated as well as he could, trying to see the road. As familiar as he was with the land, he’d have said he could drive home blindfolded. Thirty-eight years he’d spent on the place—his whole life. Trent had gone away to college since their dad had said one of them needed a degree, but he’d come home as soon as he’d graduated.

Both of the Jacek boys had ranching in their blood. Both of them were gay, too, something that would have killed their daddy had he not already been dead when Joe’d started to accept his own sexuality.

Joe’s chest ached and he took a hand off the wheel, slowed down some more and rubbed at the spot. “Hope I’m not having a heart attack like Dad.” He blinked, because surely he had something weird going on with his eyes. There was no way something was moving out there in front of the truck. “What the—?”

His first thought was that one of the cows had gotten loose, except it wasn’t big enough to be a cow. Plus, its eyes were glowing yellowish in the dark.

A chill shot down Joe’s spine. He hit the brakes too hard even though he had been poking along, and the impact of his chest against the steering wheel knocked the breath out of him.

Or maybe that was fear, because those glowing eyes were getting damned closer to the truck.

Joe didn’t know why he was so scared. He was in his truck—he hit the door lock. Unfortunately, the passenger door had to be locked manually, and he dove to the right, reaching for the little knob by the passenger window.

And he missed, falling over halfway while his foot slipped off the brake.

“Shiiiit!” Joe flung himself upright and stomped on the brake. The truck shot forward. “Fuck! Gas! Brake!” His head spun as his pulse accelerated at a speed much faster than the truck.

Joe slammed on the brakes and hit the steering wheel again. He shoved the truck into park and reached for the knob to turn on the lights again. His hand was shaking so bad it took two tries, but he managed finally to get the headlights back on. He watched as those glowing eyes faded some, but they still seemed unnaturally colored when Joe saw the critter they were attached to.

“A—” He frowned and leaned so far forward his head almost touched the windshield. “Coyote?” If so, it was a big one. The thing was almost as tall as the truck. Joe was certain its pointy ears reached the top of the grille, at least. “You ain’t no coyote.”

He felt instant relief when it dawned on him that he must be looking at someone’s German Shepherd. A big German Shepherd, sure, but it wasn’t a coyote and the markings were similar to a German Shepherd he’d seen ages ago.

“Someone must have dumped you, huh, buddy?” Joe chuckled and leaned back in the seat. “Damn, boy. Or girl. You about scared a decade off me.”

For one fleeting second, he wondered if it was a wolf, but Joe discounted the idea. Once there’d been red wolves in the area, but they’d been extinct for a long time. At least they had been from Texas. He vaguely remembered hearing something on a TV show about them having been raised in captivity and freed elsewhere.

As far as he knew, there weren’t any other wolves native to the area, so that had to be a dog, he reasoned.

It walked out to stand in front of the truck. Joe shivered as he looked into the dog’s yellow eyes.

Reviewed by Hearts On Fire

The connection between Joe and Diego is intense. It grows stronger each day they spend together. It was wonderful seeing how Diego reacted to Joe’s kindness. The sex scenes were hot and steamy. Diego...

A truly wonderfully written book by Bailey Bradford. The details of the Texas landscape were simply breathtaking. I could actually imagine I was there with Joe and Diego as the story unfolded. Hot, steamy...

Share what you thought about Dark Nights and Headlights and earn reward points.