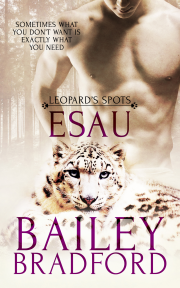 Book 6 in the Leopard's Spots series

Sometimes what you don't want is exactly what you need.

Esau Walraven is a loner in a family filled with togetherness happy people. A shifter, it has taken him years to come to terms with that aspect of himself. He used to resent being different, but now he has come to appreciate it, and even embrace it. He's still not thrilled about being around people, but when his family asks for help, Esau is there to give it.

Ye-sun Warren helped his brother escape from their cruel grandfather. It didn't matter that Ye-sun had never met that particular brother, it was the right thing to do. Added to that, he has a nephew, a sweet baby boy who shouldn't be used as a pawn. Ye-sun's decision to help them costs him, with his grandfather punishing him in cruel ways he thought would kill him. Abandoned and left to die, Ye-sun is an angry, hurting Amur shifter.

When Esau and Ye-sun meet, the sparks fly. Esau tries to reject the mate-bond, but when he gives in, taking the innocent man first as they are leopards, then as men, he swears to himself he will not feel anything but lust for Ye-sun.

Reader Advisory: This book contains mild BDSM-Spanking and is part of a series, so best read in order.

Esau Walraven normally loved the acuity of his shifter senses. Being a snow leopard shifter was a gift, a blessing in his opinion. He could turn into one of the most gorgeous of cats, and the power in his body when he did so was amazing. There was a freedom to being a leopard that no human would ever understand, and he had this huge extended family he was close to. Maybe not real close, because Esau tended to be more of a loner than not, but he loved every one of them, and they probably felt the same about him, too.

His loyalty to his family was why he was out in the middle of the night, traipsing through a recently fire-purged forest. Those senses that he had, yeah, they were pretty damned awesome-except his nose was burning like a mother and his eyes kept watering. The stench from the forest fire was wretched, sulphur and fear and death. Smoke lingered, soot was everywhere, and the enhanced senses might have been working against him at that point.

"Anything?" Oscar called back to him. Esau shook his head. They were out in the middle of this scorched land trying to find out if a lepe, or clan, of Amur leopard shifters had survived the fire. Esau only knew two Amur shifters, Bae, who was his cousin Isaiah's mate, and Jihu, also a mate to a cousin, Gilbert. It was Bae and Jihu's family who might have perished in the fire. Or maybe they survived. Esau wasn't holding out a lot of hope. In his experience, the good people ended up dead and the fuckwits got away.

No, sometimes the fuckwits get dead, too. If someone tracks them down and delivers justice to them. Esau turned his thoughts away from that to what he was doing, which was trying to detect any scent or tracks that would offer them a clue to where the Amur leopards were. If they had escaped the fire.

If anyone did get away from the fire, it was probably the evil guy who wanted to keep Jihu and Bae and make them breed with females. Fucking Fate seems to like to let shits like that survive and claim good men for her own. No, I'm not going there. He was having a hell of a time reining his thoughts in tonight. Esau wiped his brow, sweat wetting it despite the chill in the air. He concentrated on catching any sign of the Amurs.

Occasionally he'd think about the messed up lepe Bae and Jihu had got tangled up in. What kind of sick leader enforced rape? That was what the Amur 'breeding program' had been, at least it sounded like it to him. Not that Esau knew all that much about it. He hadn't really been around Bae much, and had only just met Jihu a few hours earlier. They seemed like nice guys, though.

Esau wished they'd had a better plan for the hunt they were all on now, but he supposed no one had had time to come up with one. He felt plans were necessary in his life. If he didn't have them, well, he didn't like that at all. His job required plans, blueprints, and he figured that was a good way to go about life, too. A nice mapped-out plan.

Esau snorted and rubbed at his eyes. Yeah, sometimes life didn't go along with that, or that bitch Fate shredded the detailed plans you had written up, but Esau always just made new plans then.

Kind of like he'd just done, coming to help his family. He was bringing up the rear of the group he was with, all of them searching, hoping. He'd heard Bae and Jihu talking about one of their brothers, Ye-sun, and Esau hoped that maybe that guy, at least, had survived.

"Be nice if someone good made it out of this mess," Esau murmured to himself. He stopped and took a drink of his water, arching his back and neck as he did so. The urge to shift and run was strong, his leopard really not happy with the smell of fire, or the remains of the fire, either way. It was a good thing he could reason with his inner beast, good that the man held the power most of the time. Otherwise, things could get…ugly.

Off to his right, Esau thought he saw something slightly off. Several feet away, there was a patch of ground that looked to be disturbed. Esau loped over to it, checking that the others were still off ahead of him. He knelt and sniffed, and along with the scent of scorched earth, another odour filtered into his nasal passages.

And it hit him like a sledgehammer to the gut. Esau grunted and tensed, his entire body tingling, his dick springing to life, thickening in a matter of heartbeats. Holy crap, what the hell is that? He sniffed again and moaned softly, his nipples aching, balls throbbing, heavy, full in their sac. Esau palmed his cock and rubbed, shivering as heat flooded his groin, need coiling before shooting out to his genitals, making his pucker clench.

If he kept groping himself just so, he was going to come, going to shoot in his jeans like he had done the first time he'd kissed a boy. Well, there'd been rubbing then, too, and neither him nor Kris had lasted more than a minute kissing and rutting. Still, that was almost twenty years ago. Esau couldn't believe his control was fraying all to hell now.

The reason for it could not be the one he suspected. No, he couldn't believe it. Esau refused to even think about why his body was rushing with hormones, his cock so hard he could barely keep himself from spurting in his pants. Esau was not going to fucking think about it-but he was going to hunt down the cause of his distress, his intense arousal. If the alluring aroma belonged to an evil piece of shit, Esau would rather be the only one to ever know he'd got the boner of all boners from it.

"Hey, I'm gonna do a little reconnaissance," he called out. Oscar and the others stopped and looked back at him. Esau desperately wanted them to not come any closer. He couldn't hide his erection, and they would probably scent his arousal if they were within a few feet of him, even with the singed odour of the forest. "Just want to check something out. Go on, and I'll probably meet up with everyone back at the rest area."

Esau didn't wait for their agreement. He shot to his feet and took off, moving briskly at roughly a forty-five degree angle away from the others. Now that he had the scent, he wouldn't lose it. A quick check behind him assured Esau that the rest of the search party had gone on without him. That eased him some. His damned cock was still hard, and walking was going to rub his pecker raw if he couldn't adjust himself. Esau stopped, unzipped and tried to find a more comfortable position for his dick.

There didn't seem to be one. He was tempted to beat off and be done with it, except something told him he'd still be hard afterwards and unsatisfied with his own hand. No sense in bothering then. He tucked it away and hoped he'd have some skin left when he got to where he was going.

The trail he was following wasn't visual. He rarely found any more disturbed areas on the ground. Slowly, after more than two hours hiking through the burnt-out woods, Esau realised that he wasn't really even following a scent. No, it was a feeling—a tug like an invisible line was attached to his gut, a fish hook embedded in him, and he was being reeled in whether he wanted to be or not.

Loved this book. Emotional up's and down's, plenty of drama, and a happy ending.

I enjoyed learning about Esau's past and Ye-Sun was an interesting study in innocence. Some of the actions and conversations will leave you with a chuckle. A great addition to The Leopard's...

Share what you thought about Esau and earn reward points.