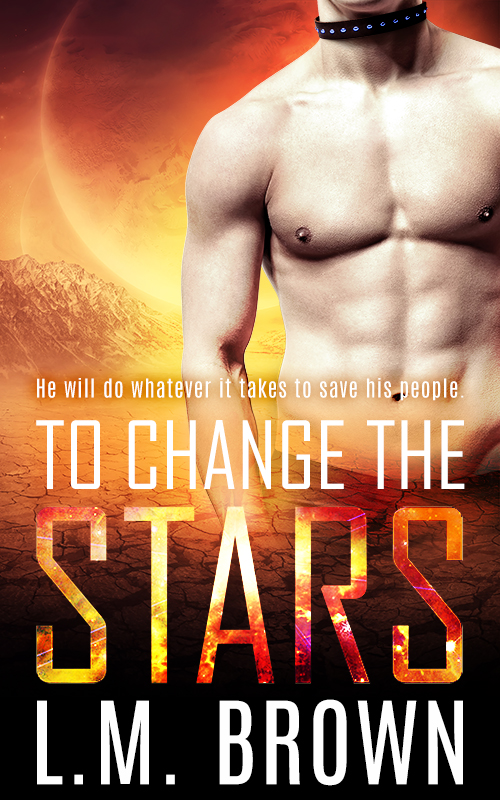 To Change the Stars

Jessiah will do whatever it takes to save his people—lying, spying or even selling his body.

A book written hundreds of years ago holds the key to the future of the last survivors of the human race.

Growing up in a massive underground cave network, Jessiah has never known any other world. When he discovers the existence of a time portal, he enlists the help of his friends to expose the truth about the greedy scientists who control it.

Garrett has no head for science and struggles to earn the respect of both his peers and his father.  With a taste for parties and whores, Garrett is the chosen target for Jessiah and his friends to gain access to the laboratory containing the time portal.

Impatient and impulsive, Jessiah decides to move things along at a faster pace by playing the role of a prostitute to get close to Garrett.  He is prepared to sacrifice his virginity for their cause, but he doesn’t plan on falling for Garrett in the process.

With the future of the human race in the balance, the stakes for humanity are high. With his heart on the line, the risk Jessiah takes might be even higher.

Only together can Jessiah and Garrett change the stars of everyone in the caverns.

Reader Advisory: This book is the sequel to To See the Sky

Jessiah closed the door behind him and waited until Corrine and Ashleigh had taken their seats. They had decided the private room in the archives would be the safest place to meet to discuss the situation.

“Well?” he asked, as Corrine placed the worn paperback on the table in the center of the room.

Corrine shook her head and tutted. “I would never have thought it possible.”

“Oh, I didn’t say that,” Corrine assured him. “The picture of the authors is proof enough of who wrote this book.”

Ashleigh, the third member of their little team, picked up the book and flicked to the back page. She wasn’t much of a reader, so Jessiah had already told her what the story was about. Corrine had insisted on reading it for herself before they made any rash decisions.

“They look happy,” Ashleigh commented with a smile.

“I’m sure they are,” Corrine replied. “Ryder and AJ no doubt had long and healthy lives in the distant past. They were probably much better off there than they were here.”

Jessiah nodded and took the book from Ashleigh so he could look at the photograph for himself. Ryder, the man who had saved him and Ashleigh from a life in the Labyrinth, smiled for the camera. Beside him was his lover AJ, who Jessiah had known only briefly, and not as well as he would have liked. Between them was a strange creature that the text of the author biography referred to as a dog. The small family loved the outdoors and Jessiah envied them the ability to breathe the clean, fresh air.

Unlike their contemporaries, Jessiah knew exactly why the two men enjoyed being outside so much. After living his entire life in the vast underground cavern system, he would have felt the same way.

After the Last War, the atmosphere of the earth had become poisoned with deadly gases and the only survivors of the human race had retreated below the surface. The cave system had quickly filled, and as the population had grown, they soon had to search for another solution. Digging out new caves had become essential and continued to the present day. Caves and tunnels stretched in all directions from the original ones—twisting, turning and crossing each other. The massive cave system was impossible to map and had earned the nickname of the Labyrinth, and the occupants…the lab rats.

Jessiah still recalled the choking dust on the lower levels, where new tunnels were being dug to accommodate the still-increasing population. Life expectancy in the Labyrinth was just twenty-five years, but still the population grew, largely due to the lack of contraception for the masses. When people didn’t have the credits to pay for essential medicines, things like contraceptive pills were a luxury most couldn’t afford.

It didn’t help that the merchants kept their prices high, hoping to elevate their own status and escape the Labyrinth for a new life in one of the towers.

To monitor the condition of the air and establish when the surface might one day be habitable again, the scientists of their society all lived above the ground in impregnable towers. They were the elite, working tirelessly to keep humans from becoming extinct, until they could emerge into the sunlight once again.

Only the scientists, their servants and the occasional savvy entrepreneur could afford to live in the towers.

What no one had realized, at least until now, was that the scientists weren’t producing the supplies to keep things going. They were fetching them from another time in the distant past. They had an escape route out of the hellish world of the Labyrinth and they had kept it a secret for years.

When Jessiah had read the book by an author named AJ Ryder and recognized the picture of the two co-authors at the back as being his friend Ryder and Ryder’s lover AJ, he had discovered the truth about their society, and his determination to set things right had taken hold.

“So, what are we going to do about this?” he asked the two women.

“What can we do?” Ashleigh replied. “We don’t have access to the laboratories where this time portal is kept.”

“But we have to do something!”

Corrine patted his arm. “We will, but we mustn’t rush into things. If they suspect we know about this portal, they’ll send us into the past along with Ryder and AJ. We can’t let that happen. We have to think about everyone.”

“You’re right, of course, but what are we going to do?”

Corrine, who had been like a mother to him, shook her head. “I don’t know, but I’m sure between the three of us, we’ll think of something.”

“We need a scientist on our side,” Ashleigh said, “someone with access to the laboratory, who isn’t a dick.”

“Ashleigh, language,” Corrine scolded. “How will you ever find a nice young man if you keep swearing like you do?”

Jessiah snickered, earning him a scowl of his own.

“And you can stop laughing,” Corrine added. “Your own mouth can be just as dirty—and is probably where Ashleigh picked it up in the first place.”

Suitably chastised, Jessiah returned to the matter at hand. “Ashleigh is right. We do need a scientist on our team.”

“Pity we don’t know any other than the boss,” Ashleigh said. “And he won’t help us, not after what he did to AJ and Ryder.”

“Then I suggest we find another one,” Corrine said. “Let’s check the public records and see which of the scientists have the same security clearance in the laboratories that Blake does. One of them has to be suitable.”

Share what you thought about To Change the Stars and earn reward points.