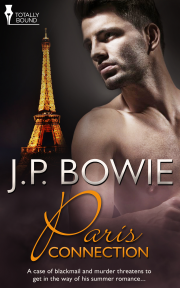 A young American falls in love with Paris, and a stunning Frenchman, but murder and mayhem, let alone distance, might ruin his chance of lasting happiness.

After seeing the movie Midnight in Paris, Jay Harrison becomes obsessed with the idea of a vacation in the City of Light. Jay has always been a bit of a dreamer and while he doesn’t think he will actually have the same bizarre experiences the main character in the movie had, he is certain that Paris holds something very special for him.

Jay is a shy man and a bit of a lightweight in the sexual experience arena, so he’s nervously surprised when Anton Delcour, a handsome Frenchman, introduces himself at the Café Les Deux Magots on his first day in Paris. He’s even more surprised by his own eagerness to know more about Anton—a lot more. When Anton offers to give him a personal tour of Notre Dame Cathedral, he jumps at the chance to perhaps get better acquainted with Anton.

The two men bond quickly through their mutual attraction, and Jay’s visit to Paris takes on a new dimension when he’s in Anton’s company. But when a case of blackmail and murder threatens to get in the way of his budding summer romance, Jay begins to think that the movie he loved might just pale in comparison to what is actually going on around him.

Jay Harrison had always been a dreamer. His mind was usually far away from where he actually should be at any particular moment. When he was a kid, his mother had called it flights of fancy, his teachers would sigh and ask him to pay attention, while his friends would just grin, roll their eyes and chuckle at Jay’s faraway expression.

“He’s gone again.” Blake Tucker nudged his partner Ryan Bryson and nodded towards Jay who was sitting opposite them at their kitchen table.

Ryan laughed and waved his hand in front of Jay’s eyes. “Hello, anybody home? Where are you today, apart from ignoring the waffles I slaved over after you invited yourself for breakfast?”

“Huh?” Jay forced himself to focus on what Blake was saying as his friend’s words finally penetrated his mind. “Oh, sorry…I was in Paris.”

Blake groaned. “Not again. Ever since we went to see that darned movie—”

“That great movie,” Jay said, correcting him with a smile. “I know, I’ve become obsessed with the idea of Paris at midnight, walking in the rain—”

“Take a trip to Seattle. It’s always raining there, and it’s a lot closer. Eat your waffle.”

“I’ve been to Seattle.” Jay paused to fork a piece of waffle covered in maple syrup then shove it in his mouth. “It’s nice,” he mumbled, “but Paris…is most beautiful in the rain. They said that in the movie.”

“Trouble with Paris, from what I’ve read,” Ryan said, “is you have to put up with the Parisians.”

“Uh, no… But everyone who’s been there says so.”

“Funny thing.” Jay popped another piece of waffle into his mouth. “I’ve heard that said about people here in Los Angeles. Anyway, I’ve always dreamt of going to Paris, and seeing that movie just clinched it for me.”

“You’ve dreamt of a hundred million things over the years we’ve known you,” Ryan said, his tone affectionate rather than mocking. “What you need, my friend, is to get laid.”

“Excuse me?” Jay gave Ryan a haughty look. “And how do you know I haven’t been laid?”

Ryan winked at Blake. “Notice he said ‘haven’t’—as in have not.”

“My sex life, or lack of it rather, isn’t the topic of discussion here,” Jay said tartly. “Now, Paris—”

“Why don’t you have a sex life?” Blake demanded. “You know, one iffy relationship doesn’t have to mean a lifetime of aloneness—”

“Blake!” For a moment Jay considered an angry retort, but then he realised his friend wasn’t being intentionally mean. He replied casually, “For goodness’ sake—how long have you known me, and how many times have I told you I’m not interested in having another boyfriend? And as I won’t do one-night stands, my sex life is by effect…uh, limited.”

“But why?” Now Ryan joined in the inquisition. “You’re a good-looking guy. You have that wholesome, all-American blond, blue-eyed look and as innocent as you sometimes appear to be, you must have needs.”

“Honestly!” Jay felt his face grow hot. “Why has this turned into something I am not comfortable talking about? I came over here to spend quality time with my friends, and—”

“And grab a free breakfast,” Blake said, grinning, obviously trying to ease the tension he no doubt knew he’d created. “Okay, okay, I guess not everyone wants a warm, secure relationship like Ryan and I have.”

“After you ploughed your way through half the guys in college, you probably needed the rest.” Jay laughed at Blake’s incredulous expression. “Well, almost half.”

Ryan’s laughter was a little weaker. He stared at Blake. “What’s this?”

“Nowhere near half,” Blake said defensively.

Ryan levelled his gaze at his partner. “I knew you’d played around a lot before I met you, but half the guys in college?”

“Nowhere near half!” Blake yelled. “Jay, will you tell him?”

“If you’ll lay off talking about my sex life.”

“Done.” Blake squeezed Ryan’s hand. “He really was kidding. So…” There was a moment of silence before Blake cleared his throat then asked, “You’re serious about Paris?”

Aw, romance in the city of romance.

I really enjoyed how Anton was taken by Jay. The two were immediately attracted to one another and made sure to...

The writing is smooth, the descriptions of Paris are enchanting, and the romance is heady. A good read for fun and relaxation.

Share what you thought about Paris Connection and earn reward points.

Paris Connection is a finalist in the Gay Contemporary Romance category at this year's Rainbow Awards.