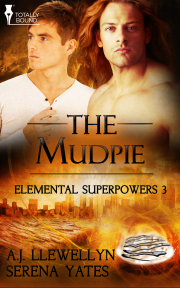 Book 3 in the Elemental Superpowers series

Mitchell is proud of his new wrestling persona and trading card, but he hadn't planned on actually facing his wrestling hero, Whip "Mudshark" Jackson, in the ring…

Geeky Mitchell Dykins loves his new job as marketing manager for a wrestling federation's participants. After creating a huge online campaign for his company's wrestlers, he befriends the most fearsome warrior of them all, Whip "Mudshark" Jackson. Whip is so thrilled with Mitchell's work, he demands that the company create a wrestling persona for Mitchell and therefore he'll get his own trading card. Mitchell is tickled. This is all good, right?

Unfortunately Mitchell soon finds himself transformed into his wrestling persona, "Mudpit Madman". When he starts waking up covered in mud, Mudshark lying beside him, he begins to worry. The worst of it is when he defeats Mudshark who then puts a contract out on Mudpit.

Whip claims he knows nothing about what his alter ego is doing. He likes Mitchell. But his muddy wrestling character seems to have a mind of his own…can he be telling the truth?

Is Mitchell completely nuts to still like a guy who probably wants him dead?

Reader Advisory: After reading this book you may feel an urge to eat mud pie — and don't be surprised if you find traces of mud on your floor…

"Okay, Mitchell. Blow through this crystal."

Mitchell Dykins hesitated. So far, so weird. Well, the office wasn’t weird, now that he was used to breathing through the haze of nag champa incense. The half-grimy windows held a wonderful view of San Francisco’s Golden Gate Bridge beneath the sun, which shone in a pale egg-yellow outside. The office itself was artfully cluttered with all kinds of Native American ephemera and piles of books. A couple of cats lay sleeping on stacks of old newspapers.

It could have been a cosy setting except that he hadn’t been offered a cup of tea or a cookie. He tried to relax. He felt a bit stupid, and yet oddly excited at the same time. He had never thought about soul retrieval, never even heard of it until his sister Alicia insisted he try it. She’d even sprung for the hefty two hundred dollar fee. She knew he really couldn’t afford it since he’d been unemployed for months. Now that he was firmly back in the grip of the workforce, he was busy paying off credit-card debt. His only luxuries were some essential clothing items for his astonishing new job.

Yes, he was employed, but, as Alicia loved to point out, his crippling self-doubts could easily cause him to self-sabotage at a moment’s notice. As shocked as he was by his new, lucrative position as head of marketing for World Wide Wrestlers, Inc., he panicked every waking moment that he’d somehow manage to screw it up.

He reached across the desk, hiding his doubts and taking the small, thinly sliced yellow geode crystal from the therapist’s fingers. The outside edge was a rough, greyish stone, the crystal itself a dazzling yellow disappearing into a hollow centre.

Carrie Hoffman was a soul retriever. He knew only three people in the whole of the US did this work and she was one of them. He didn’t fully understand what it meant, but he was willing to go along with things...for now.

He’d tamped down his inclination to type back—I don’t. My sister thinks I need it. Instead, he’d written the truth—I’ve overcome severe depression and my life seems on an upswing but I am afraid I’ll sink back into the abyss. I’ve been this way my whole life and I don’t know why.

Mitchell felt an odd tug of emotion he couldn’t identify. Carrie had asked him to delay a business trip to New York to be in her office for the session. She often worked remotely but she’d requested his presence for this particular soul retrieval. She said she’d meditated on it and that her ‘guides’ said he needed to be with her.

He had been nervous but had granted her three requests—to be in her office by ten a.m., to clear his schedule for the day and not to deal with any business for that duration, and to go straight home and rest afterwards. She had strongly advised him not to have dinner with business associates or friends with problems.

"You’ll want to walk with nature afterwards. Hug a tree. Be as quiet as possible."

She was a matronly, mothering type of woman, with long, flowing honey-coloured hair. Their colouring was so similar she could have been his mother. She, however, was very feminine and wore interesting jewellery. She also had a nice smell he couldn’t identify. She was earthy and sweet. Instinctively, he trusted her.

He was about to pucker up and blow into the crystal when she spoke again.

"Mitchell, I want you to know, I am on this journey with you. You are not alone."

"We are about to return to a traumatic scene in your childhood. Whatever happened to you was so devastating that you have buried it deep in your subconscious."

"But I don’t remember anything happening to me when I was a kid. I had a marvellous childhood," he blurted.

She gave him a sympathetic smile. She kind of reminded him of Dr. Drew, the man who treated celebrity drunks. He got that same expression, a mixture of pain and pity on his face.

"You’ve forgotten, my dear. That’s why you’re here." She paused, as if hunting for the right words. "What happens is that, when we are presented with a harrowing experience, we lose pieces of our soul. They break off like chunks of ice and drift out to psychic islands...as a way of protecting us from further spiritual and emotional damage."

He nodded. He had heard that people who suffered sexual abuse couldn’t remember specific details...but nothing like that had ever happened to him.

"...only those pieces of our soul never come back. They don’t know how. This work I am doing started when I helped another young man like yourself." She beamed at him over her granny glasses. "Now, blow."

Mitchell blew. She urged him to try it a second time. Then a strange thing happened. The cats asleep in the room sat up and both jumped from their perches. One wrapped its legs around him and he found himself propelled forwards. He had the weirdest sensation of falling...falling into darkness.

Carrie’s voice came to him like an echo behind his head. He panicked for a moment when he felt as if he were trapped in a well. He blinked when he saw grass emerging under his feet. The two cats leapt ahead of him then bunnies hopped across his path as he suddenly landed on what felt like a polished, wooden floor. It wasn’t a physical sensation, but a visual one. He heard himself breathing, heard the stress in his sharp exhalations.

The multi-layered plot moves along at a fast pace, there's plenty of action, Mitchell and Whip interact with numerous otherworld individuals and the descriptions are nicely done...a great plot...

The Mudpie' is an amusing, tongue-in-cheek, but sometimes quite serious fantasy love story...Thanks, A.J. and Serena, for another wonderful supernatural adventure.

Share what you thought about The Mudpie PRINT and earn reward points.