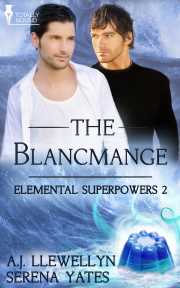 Book 2 in the Elemental Superpowers series

Finn Garrison is a Water Mage who lives in Bermuda and teaches swimming to water-phobes, assists in the salvage of ship wrecks and rehabilitates local wildlife in his spare time. When he gets called to be a juror in a high profile Water Court trial and his life is endangered, he knows he needs help.

Ty Anglin is an experienced Water Marshal who doesn't really want to become someone's glorified bodyguard. When he meets Finn, he's not only attracted to him, but also suddenly very protective. Two attempts on Finn's life later, they are both sure there is more going on than meets the eye.

Will they be able to find out who is behind the assassinations? Was the sea monster on trial really framed? And are freshwater people really being discriminated against by their saltwater cousins?

Finn Garrison stepped out onto the sand and stretched. At six-foot-four, he was a big man and being scrunched up in a jury box day after day took its toll on him. Even his toes were happy to be back at the beach. He luxuriated in the chilly morning air and stared up at the sky.

He studied the appealing mix of shades. Brilliant blue with streaks of egg white cloud, a hint of green and soft grey. A whisper of rose. So much better than where he’d been. It reminded him of a Dairy Queen Blizzard. Why did he always think about things in terms of ice cream?

He longed to saunter over to Christopher’s house, which was just three doors down, and start his morning with a cup of coffee. Christopher was so much fun and always lifted his spirits, but he could tell by their closed patio door that Christopher’s lover, Marcel, was still home.

When Christopher was alone, music and good baking smells poured out of the open doors. That’s how he and Christopher had first met-on the beach, discussing food. He gulped as he realised Marcel was not Finn’s biggest fan. For some reason, he seemed jealous of the budding friendship between Christopher and Finn-which was ridiculous. Marcel was older, but the Fire Court judge had Christopher’s heart. Finn was more like his...court jester.

He found himself wondering, not for the first time, about Christopher’s relationship with the dangerous and powerful Marcel Paradis. They both held high positions in the Fire Council. They were part of the clandestine network of the super-secret elemental superpowers. So was Finn. Sometimes it made him feel like Batman, other times he felt like a lunatic.

If he told any regular person what his life was like, he’d wind up in a rubber room. A juror for the Water Court, Finn was adjudicating a difficult trial right now. Being new to the Northern California beach community of Half Moon Bay—his temporary home-he’d been relieved to meet Christopher and Marcel.

It had been a fluke really, since most people involved in elemental superpowers usually didn’t fraternise outside of their special elemental zone. Christopher was different, though. He had friends in all of the houses—earth, air, fire and water.

Dang...maybe I do like him as more than a friend.

This thought worried him. Hankering for the wrong guy had already landed him in a whole world of hurt. He could just quietly walk by their house. Christopher wouldn’t even need to know Finn was on the beach.

But I want him to see me. I want to hang out with him. I think he’s seriously special. He’s not only the hottest guy I’ve ever met, but nobody cooks the way he does.

Finn tried not to allow his romantic and sexual fantasies to filter into his brain. He had enough on his plate.

Still, he wavered. He longed to talk to Christopher, who was not only sympathetic and understanding, but also made a fantastic cup of coffee. Not that he’d discuss the actual case with the man—or more appropriately in Christopher’s case, Mage—but Christopher could make sense of even the smallest peculiarities. He was a magic man. Finn had no idea what the guy put in the coffee he made, but it always left Finn feeling very mellow. Christopher Fire ran an incredible bakery called Fabulous Cupcakes with Marcel’s son, Daine. It had become the hottest bakery in San Francisco, both with humans and the 'elementals' -as some people with superpowers called themselves.

Share what you thought about The Blancmange PRINT and earn reward points.