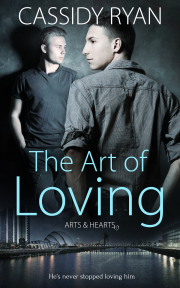 The Art of Loving

Book 1 in the Arts & Hearts series

Does Asa have a life sentence doing time in the friendzone?

Asa has been in love with Theo since their art school days in , but Theo has only ever had eyes for their straight friend Oliver. Two years ago, unable to take the pain of unrequited love any longer, Asa came home to . He hasn’t seen Theo since, nor has he stopped loving him.

When Oliver marries Charlotte, Asa can’t come up with any reasonable excuse not to attend the wedding, so he returns to London. He isn’t exactly shocked when Theo doesn’t show up, but when he learns that the reason for Theo’s no-show is a car accident that has landed him in hospital, Asa immediately rushes to be with him.

Unable to leave Theo to fend for himself while he recovers, Asa takes his friend back to with him.

There, secrets are revealed, and Asa learns more about Theo than he ever imagined.

Where the hell are you?

Asa hit the ‘Send’ button, then tucked the phone into his palm, hoping that this time he would get a reply. He had to resist the urge to look over his shoulder again, toward the French windows of the hotel, and focus his attention on the proceedings going on around him.

The hotel garden was bathed in late summer sunshine, with a soft breeze, fragrant with the scent of gardenia, to temper the heat.

As a close friend of the groom, Asa sat in the second row of perhaps a dozen rows of chairs—behind family members. Behind him he could hear a small child fussing, and in front, the mother of the groom was dabbing at her eyes with a hankie.

At the center of it all, standing under an arch of intricately woven flowers, Oliver and Charlotte exchanged their vows. Their hands were clasped between them, gazes locked together as if there were nothing else in the world worth looking at.

Asa smiled fondly. But, as happy as he was for his friends, something twisted in his chest. The unresponsive phone in his hand felt heavy, the chair beside him too damn empty.

He cast another glance over his shoulder before he could stop himself, and considered sending yet another message, annoyance and concern warring in him. But before he could come to a decision, the phone buzzed and the screen lit up, showing a picture of a man with impossibly blue eyes and a smile to rival the sun in the sky—at least to Asa’s mind.

Aware of disapproving eyes turning in his direction, he flushed warmly, but never for a second considered hitting the ‘Ignore’ button. Instead he eased out of his seat as discreetly as possible and made his way back along the petal-strewn aisle. Embarrassment clawed at him, but anticipation pushed him on, the phone still buzzing in his tightly clenched fingers.

He found a tree, behind which he could hide from curious eyes, and accepted the call.

“Where the fuck are you, Bayliss? The ceremony’s almost over,” he demanded, more relief than heat in his tone.

“Uh, hello?” a hesitant, very feminine voice said. “Who am I speaking to?”

Asa frowned. “Well, since you just called me, I think you should answer that question first.”

“Oh, yes, of course,” she replied, and Asa thought it was a fairly safe bet that she was blushing. “I… My name is Helen Merson, I’m a nurse at the .”

Asa’s stomach felt like it had dropped lower than his carefully polished shoes. He leaned back against the tree and swallowed a wave of nausea.

“Why… Why are you calling me from Theo’s phone?” he asked, pushing a hand through his dark hair.

“I am. Please…” he almost begged, squeezing his eyes shut and pressing the heel of his hand to his forehead. “Theo’s my…friend. Just tell me.”

“Mr. Lennox,” she began, and there was such a kindly tone to her voice that Asa thought he might actually throw up. “This isn’t exactly standard procedure, but, well, Mr. Bayliss—Theo—was brought into Accident and Emergency an hour ago, and his phone has been ringing at regular intervals with your messages. You seemed to be worried, so I thought… God, I hope I don’t get into trouble for this.”

Accident and Emergency. Hospital. Asa sucked in a ragged breath. “Nurse, Theo. What…?” His throat seemed to lock up, and he couldn’t finish his question. He felt lightheaded, and gripped the phone until his knuckles where white.

Behind him he heard the strings of a violin start to sing and guessed that the ceremony had come to an end. Jesus, what was he going to tell Oliver?

Sometimes you just need that short sweet love story to give you a pick me up and The Art of Loving is a friends to lovers novella that does just that.

So if you are looking for a sweet and s...

This is a great story! I enjoyed everything about it...Throughout the story, you can feel the sexual tension rising just a little, but once they are finally together? It was wonderful, loving, and H...

Share what you thought about The Art of Loving and earn reward points.

Other books in the Arts & Hearts seriesView Series Page