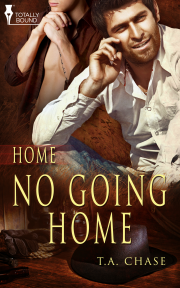 Book 1 in the Home series

Six years ago, a hoof to the head ended Leslie Hardin's showjumping career and his relationship with the man he loved. Broken, hurt and rejected, Les has focused his energies on rebuilding his life.

Les' accident has shown him that the most valuable treasures are usually found under an imperfect surface, and his reputation for taking in strays starts to grow. But it's one of these strays in particular, injured rodeo cowboy Randy Hersch, who captures more than just his compassion.

Between his disapproving father and his chosen career path, Randy has always felt the need to deny his passion. When Les takes him under his wing, Randy begins to realize that he is truly strong enough to admit his true self—to himself and to the rest of the world. But in the arms of a broken man, can he find acceptance…and love?

"Damn horse," Randy Hersch muttered as he shifted, trying to find a comfortable spot in the seat of his truck. His body ached, he wanted to stop and rest for a while. He’d spent the last two weeks in hospital, and he had a sudden urge to go back to the Rocking H and see his family. He hadn’t called to let his sister know he was injured or that he was coming home.

He stopped the truck at the beginning of the driveway and stared at the buildings. The Rocky Mountains proved a beautiful background for the ranch he’d grown up on and had left when he was eighteen. The anger and hate between him and his father had got to the point that he had known one of them would end up killing the other if he had stayed. Randy had left the day after graduation and hardly came back anymore. After getting his leg broken and his body stomped on by an angry bronc, he’d decided it was time for a visit.

It had been a year since he’d last been home. The ranch didn’t look like it used to. No longer were the barns painted the dull grey his father seemed to favour. They were the bright blue he’d come to associate with clear Wyoming skies. The windows and doors were trimmed in pristine white. There were three more new buildings on the other side of the main house—he remembered his sister telling him they’d had to build more foaling barns.

It’s not home anymore, he thought as he drove up to the main barn, which was filled with organised chaos. His sister Tammy stood in the aisle, directing the ranch hands. He climbed stiffly out of his truck.

Tammy whipped around. Squealing, she raced towards him. He was only able to stop her from launching herself at him at the last moment.

"Wait, girl. Be careful. I’m bruised." He accepted a gentle hug from his favourite sibling.

"Oh, Randy, are you here to recuperate or to stay?" Her gaze traced over his body.

"Staying’s never been an option for me, Tammy. You know how Dad feels about me." He shoved his hat back on his head. She wrinkled her nose but kept quiet as he took in the view of spindly-legged foals gambolling beside their mothers.

"What are you doing with the babies?"

Her face lit up. "It’s time to pay the rent on those three hundred acres Daddy leased from our neighbour, Les Hardin."

"What does the rent have to do with the foals?" He scratched the velvety nose of one of the mares.

"Les gets his pick of each year’s foals. That’s what we pay."

"Wait a minute. Who set up that deal? He’s robbing you." Randy was furious.

The Rocking H bred and trained some of the country’s best cutting horses. Each one of the foals was worth tens of thousands of dollars and it was far more than the property they were leasing was worth.

"Wait, Randy. Don’t go off half-cocked. Les and I worked out a deal. Just wait and watch." She pointed to the plume of dust heading towards them. "He’s here."

Randy bit his lip and fought back the urge to argue. He wasn’t going to treat his sister the way their father treated him. Tammy had taken over running much of the ranch when she’d turned eighteen. He had to trust that she knew what she was doing.

He stood back as a beat-up black truck clattered into the yard. When the tall man wearing a black cowboy hat stepped from the vehicle, Randy clenched his fist and pressed it to his stomach. He’d never felt such a kick of attraction before in his life.

Les Hardin was an inch or two taller than Randy was. His hair was cut short enough to be covered by the cowboy hat. The tanned skin attested to hours in the sun. Les’ thin lips pulled up in a smile as Tammy greeted him, but Randy got a look at the man’s eyes when he tilted his hat back. Dark brown, and filled with a sorrow so deep Randy was sure he’d drown in it. Here was a man who has lost everything important to him, Randy thought.

Randy’s dick hardened and he groaned. He didn’t want to lust after this man. He didn’t want to get involved with anyone near the ranch. Avoiding any possibility of that made his life more peaceful when he did come back. At least, it was one less reason for his father to hassle him.

Those brown eyes turned his way and he realised Tammy was waving for him to come over. Reluctance dogged his steps. Why did he get the feeling this man would change his life?

"Les, this is my older brother Randy," Tammy introduced them.

Les’ voice was a deep honey drawl. Randy’s skin tingled where the man’s eyes studied the cuts on his face.

Blinking, Randy realised Les was talking to him. "Yeah, made eight. Then the pickup rider screwed up. Dropped my ass right in front of the bitch and she stomped the shit out of me." He held out his hand. "You must be Les Hardin. Heard you bought Old Jake’s place."

He fought back the shiver threatening to race down his spine when Les’ rough, calloused hand closed around his and shook.

"Yes, I did. It was bigger than I was looking for, but it was available when I needed it."

Something flickered in those sad eyes, but it was gone before he could make it out.

"Good thing we were looking for land to lease." Tammy grabbed Les’ arm and dragged him towards the mares and their babies.

Disappointment burned in Randy’s stomach. First man in a while he’d been seriously attracted to and it looked like his sister had prior claim. Didn’t it figure that some of the best-looking ones weren’t gay?

"Tammy, Jackson said to meet him out at the usual place tonight if you’re interested." Les’ voice was low, as if he didn’t want anyone else to hear.

"Oh, he’s back from Arizona? How’d the show go down there?"

"We added a few more ribbons to the Black Bart legion. You’ll be getting a few calls, I’m sure."

Randy smiled. Black Bart was the Rocking H’s top stud. He’d bet half of the year’s crop was Bart’s offspring.

"Great. I’ll get the scoop from Jackson later." She winked at Les and said, "See any you like?"

"They’re all beautiful, Tammy, but where’s the one you really want to show me?" Les’ drawl had become brisk.

Tammy’s face dropped. "Sorry. I’ll show him to you."

Randy started to step forward. He had vowed to stay out of it, but no one was going to talk to his sister that way.

There is a lot of story packed into this book...a sweet story...I recommend this story to lovers of cowboys, coming out stories, and inevitable love.

Share what you thought about No Going Home and earn reward points.

Other books in the Home seriesView Series Page