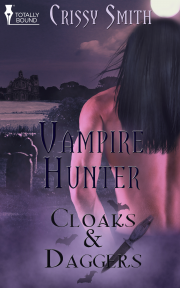 Under the full moon, backed into a dark alley, hunter and hunted collide…and sparks fly.

MacKayla Smith hunts against her will, but it is the only way she can keep her loved ones safe. She does what she has to do until a chance encounter in a dark alley brings her face to face with her destiny. And her destiny has fangs.

Ryland Thomas has spent his entire existence alone, and he likes it that way. But when he stumbles across MacKayla taking down a rogue vampire, his world is changed. Now his every instinct demands that he protect Mac. With someone else pulling her stings, it won't be easy.

Head-strong woman with a nose for trouble, vampire used to being alone—they are in for the fight of their lives. Mac and Ryland might just survive their meeting if they can band together to fight the real monster in their lives…

The full moon lit the night, giving the alley an eerie taint that matched Ryland Thomas’ mood perfectly. He wrapped the shadows around himself as he hunted his prey.

Six months he’d been after this monster—following and watching. Tonight he wouldn’t fail. He wouldn’t be one step behind when the evil was released and the monster killed again.

The crunch of the gravel echoed loudly around the walls of the alley where the hunted also was hunting. The woman who stumbled drunk into the trap had no idea what she was about to face—that her night out on the town was about to turn deadly. Luckily for her, Ryland had spotted her stalker before it was too late.

A crash sounded and he knew the fight was about to begin. The woman on her hands and knees cursed, slurring her words as she tried to pick herself up after tripping over the stinking trash that had been thrown into the dark.

Ryland tensed. She was in the perfect position to be attacked.

She shook her head as if trying to clear the alcohol, mumbling, “How in the hell did I get out here?”

“Fate.” Her answer came from just further into the dark.

“Huh?” She pushed back onto her knees, her voice shaking with fear as she called out. “Is someone there? Hello!”

Ryland shook his head. The woman wasn’t helping herself, becoming an ideal victim.

“Hello, my pretty.” The man stepped out and glided forwards.

“My pretty?” she asked with a laugh. “I really shouldn’t have had that last shot.”

Ryland agreed. Or at least should have had someone to watch out for her. He silently moved forwards until he was almost level with her, pressed into the hard brick, well out of sight. He couldn’t move in until she was in danger. It was a rule he lived by.

The woman actually sniffed herself. Ryland wanted to groan. She had no sense of self-preservation. “I smell like a bar,” she told him, pushing herself up and only tilting slightly before standing.

Her attacker just grinned. “My kind of girl,” he agreed, and stepped closer.

“You came to me. I called and you—my sweet—answered.”

He was almost close enough to touch her now. She turned her head in Ryland’s direction and his breath caught. Oh, she was pretty...beautiful, actually. Flawless pale skin, bright green eyes, and full lips that were made for kissing. He let his gaze travel down and noticed for the first time her full, curvy body, covered in tight jeans and a skimpy black silk top.

His body reacted instantly and he mentally cursed himself. He couldn’t fight with a raging hard-on. He took deep breaths to calm himself, years of training the only thing saving him from giving himself away.

She turned her head back towards the man in the alley with her and Ryland was able to control himself again. “Okay.” She waved a hand around. “Obviously I got lost on the way to my car. I’ll just be going now.”

She turned, tripping over her own feet, and as she went down once again her attacker charged.

Ryland rushed forwards only to hear a scream of pain that was much too male to have come from the woman. He threw himself back against the wall before he was seen.

The attacker had jumped back several feet away from the woman. The scent of blood saturated the air.

The journey I was taken on was one that drew me in and keep me interested the entire ride...This short and sweet story is one I'm sure you'll enjoy and will leave you wanting more...

Share what you thought about Vampire Hunter and earn reward points.