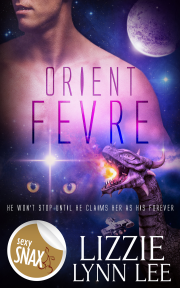 All she wants is a one-night stand. But when he discovers that she's his mate, he won't stop until he claims her as his forever.

Cat shifter Violet Cross has a penchant for trouble. When she breaks up with her fiancé, Mac, and seeks some guilt-free, sweaty, hot sex at the local bar but ends up waking up the next morning married, Violet thinks she has hit an all-time low. Especially when she finds out the man she's married is a dragon prince from the al'Tarakh throne—a VIP passenger she must escort to the D'Keghan system.

Levy Frye has been looking for his future queen for quite some time. When he sees the green-eyed feisty cat innocently proposing a one-night stand, he can't simply let Violet slip away. He agrees on a quickie, but instead he finds his true soul mate. Levy vows to make Violet his forever. The tricky part is convincing the stubborn cat they belong together.

When lust and destiny collide, a weeklong game of cat-and-dragon hide-and-seek at Orient Fevre might prove to be the most feverish encounter of all.

All I wanted was a quick fuck with no strings attached.

It was a bad idea, even in my half-buzzed condition. I knew I shouldn’t be messing around with him, but I couldn’t help it. He was one of those impossible-to-resist men, especially as he’d been eye-candying me since I’d walked into this bar.

He wasn’t a typical tall, dark stranger, mind you. From across the floor, I saw his eyes were so shockingly blue, they could have melted you into a puddle with one look. I guessed he was somewhere between thirty and thirty-five—an outlander like me. He sat near the tap, nursing a glass of beer as he fixed his gaze on me. His long raven hair, draped over his shoulders like a curtain of black silk, seemed to blend into the darkness of the bar. A black button-up shirt and tight, faded jeans wrapped his well-built body. When he turned around to reach something behind the counter, I noticed he had the most fantastic ass I’d ever seen. I’d bet all my ten fingers he had a magnificent cock, too. He was irresistible, just like a piece of over-priced gourmet chocolate that you drooled on when you’ve starved yourself from dieting.

I chugged down my Bloody Mary and decided to hit on him. The Howling Owl was jam-packed with outlanders and trans-ship crews who had boarded the Ernye suborbital station this weekend. He eyed me as I waded through the crowd. His lips curled into a wicked smile. He was probably amused I was bold enough to approach him.

His smile turned into a full-blown leer. “Well, I’ll be damned. You’re a kitty cat.”

“I have a thing for cat women. They’re exceptionally hot.”

I grinned. “Back to my proposition.”

“I’ll give you a thousand credits for a quickie.” I nodded to the direction of the coat closet. “In there would be fine. I only need about five minutes to come.”

The smile vanished and his eyes widened, looking incredulous. “You’re propositioning me? Sex for money?”

“That’s exactly what I meant.”

“For a thousand credits?”

“It’s a reasonable price, don’t you think? Most outlanders out here earn less in a week’s wage.”

He looked at me from head to toe, scrutinizing the way I was dressed. I was out of uniform tonight since this was my R and R. I had donned my usual black leather ensemble, slapped on some extra makeup, and let my hair down for this man-hunting occasion. His gaze lingered a bit too long on my deep cleavage, then on my belly and legs. I knew I looked very presentable, but he noticed something off about me.

Well, I was a light drinker and a Bloody Mary was enough to send me tipsy. “If you’re not interested, say so. I can find another willing cock.”

“I don’t want to take advantage of a drunken woman.”

“But this woman doesn’t mind being taken advantage of.”

I took it as he wasn’t interested in my offer. “Nice seeing you.”

He grabbed my arm as I turned around to leave. His grip was a little too firm.

“I think I should take you home. Where do you live?”

I laughed, wrenching off his hand. “I don’t want to go home until I’ve scratched my itch, Mister. Now, let go of me.”

He slid down from the barstool. On his feet, his height towered above mine. He was at least six-feet-eleven, if not taller, a fine stud in his prime. I only came up to his shoulder, and by all means, I wasn’t a pixie either.

“Fine, kitten, I’ll scratch your itch, but you’ll have to do it my way.”

“It involves a blindfold, cuffs, and an all-access pass. Backdoor included.”

Go buy Orient Fevre today! The characters are wonderful and the sex is smoking hot...a perfect book, and a definite re-read. Congratulations to Ms Lee.

Share what you thought about Orient Fevre and earn reward points.