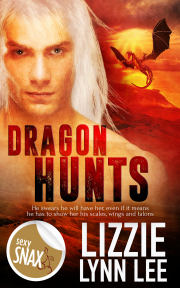 Hot boss turns into a dragon? Jessica thinks she's bitten off more than she can chew…

In ancient times, when a dragon needed a mate, he could just swoop down on a village and kidnap a maiden. In modern times, this has proven to be a dilemma. Declan, the eldest of the Cairne brothers, is due to claim a bride. As a Harvard graduate, CEO of a trading company and Versace-clad executive, he can't just shift to his true form and kidnap a woman to claim her as his. A perfect woman is hard to find, since Declan thinks dating is overrated.

Plump single mother Jessica Knapp is running away from her past. Between struggling to make ends meet and keeping herself and her son under the radar of her deranged mafia ex, dating is the last thing ever to cross her mind. So when her new boss Declan sets his sights on her, Jessie thinks his attention is nothing but flattery.

But Declan is a determined dragon. He swears he will have her even if it means he has to show her his scales, wings, and talons.

The hunt is on…

There should be a rule somewhere that bosses aren’t allowed to be this hot.

The resentful thoughts popped into my mind each time my new boss, Declan Cairne, was in my sight. It didn’t help that since the first day of my employment, Declan had been flirting with me. I wasn’t trying to delude myself by wondering why an utterly handsome, twenty-seven-year-old CEO of a high-profile financial firm would be interested in his thirty-four-year-old drabby secretary. I wasn’t a spring chicken but I hadn’t misread his signals.

I wasn’t in the market for a man and didn’t plan on getting one any time soon. If Declan had come into my life a decade sooner, I’d probably have swooned over him and welcomed him with open arms. But now I was just a single mother and currently on the run from the lunatic who’d fathered my son. I wished my ex was just another run-of-the-mill, mean, psychotic, woman-beating drunk. But Lorenzo Filocamo was a mean, psychotic, woman-beating drunk with money and power. It had taken a lot to gather my wits to leave everything behind to start a new life. Declan Cairne was a headache I didn’t need.

So I acted dumb whenever Declan made flirtatious remarks about me or my work. I didn’t want to jeopardise my only source of income. I bet at that point Declan must have thought I was the densest person he’d ever encountered. My intention of keeping the invisible wall between us didn’t waver, however. I needed the job. The pay was beyond average for someone with my skills. Every penny I could take home would be a great help.

“Do you have the MacMillan contracts with you, Ms Knapp?”

His voice startled me. I snatched my briefcase and rummaged through folders and papers. Without looking I knew that Declan was studying me, like he always did whenever I was within his reach. We were in the company limousine on our way to the airport. My boss had a company meeting overseas and, unfortunately, I had to accompany him for the whole seven-day trip. It had meant scrambling for a babysitter. I’d pleaded with Declan to take someone else, like one of his ever-eager assistants. Declan had killed my idea in a flash.

Miraculously, he had been able to come up with a last-minute solution. His brother, Curran, the company’s maths genius, had been able to take Bobby in. My son, who had always been hungry for a father figure, had been excited to spend time in the Cairnes’ family mansion. Curran had promised him a fishing trip at the weekend. Bobby loved boats. Somehow, I couldn’t shake the feeling that this whole thing was a set-up, part of Declan’s insidious machinations to get into my pants.

I found the contracts and pulled them off the stack.

“Here, sir.” I schooled my face into a perfectly blank look. It wasn’t easy, but after three months of working for him I was able to master a mask of impassiveness no matter how nervous I was. I might be a dull, mature secretary, but I was still a woman. Declan was one hell of an attractive man. His looks could stop traffic and his smile was guaranteed to melt arctic ice. No creature with a skirt was immune to his charms.

“Thank you.” Declan smiled, flashing a row of perfect white teeth. He deliberately brushed his fingers over mine when he grabbed the contracts from my hand.

A shiver of lust coursed down my spine. My heart beat faster.

I looked outside the window, trying to tame the school-girl giddiness he’d caused in me. I rarely spoke to him unless I absolutely had to. I didn’t want to make a fool of myself, considering the effect he had on me. Our days were mostly spent with him stalking me for conversations and me honing my blank look. The limo shuddered to a stop at the traffic lights. A bike messenger skidded to a halt near the limo and gave me a wide grin. He wiggled his wrist by his ear, mimicking a phone call. Young cock. I was amused. I bet he dallied with every skirt he laid eyes on. I grinned back. My smile faded when I caught Declan’s reflection in the glass. His lips had turned into a hard line. His blue eyes were ice.

Chastised, I tucked my tail between my legs and pretended I was busy with my briefcase. A slow, whirring noise whispered between us and the driver. Declan had put up the privacy screen.

I ended Dragon Hunts wishing dragons were real. Give this book a read, and I bet you will agree with me.

Share what you thought about Dragon Hunts and earn reward points.