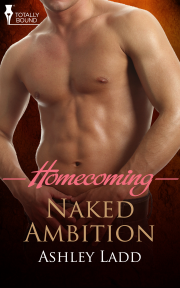 Ali James will do anything to raise her orphaned sister and finish medical school, even work as a topless waitress.

Ali James is determined to finish medical school and cure cancers like the one that killed her mother. She's also determined to raise her trouble-making teenage sister. As if it's not hard enough to juggle all this and her job as a topless waitress, her ex-fiancé comes back to town and makes it plain he's still sore she chose her career over him and that he very much disapproves her of job.

Police detective Cliff Griffin stewed in the back of the worst dive he’d ever seen. If he wasn’t on duty he wouldn’t be caught dead in the joint.

A waitress winked broadly and pointedly looked at his crotch. “Can I get you anything, sugar? Anything at all?”

He plastered a smile on his face as he choked out, “No thanks.”

The platinum blonde with bright blue eye shadow that would do a 1960s go-go dancer proud, pouted prettily and stooped lower so that her breasts threatened to spill out of her skimpy costume. “Are you sure? You’re the cutest thing to wander into this place in a year of Sundays.”

Cliff didn’t consider himself cute, but he wasn’t grizzled or dirty like most of the other patrons, either. He wondered what the woman would do if he flashed his police badge or told her he was a cop. But he wasn’t ready to reveal himself, so he looked away while trying not to get his face stuck in her cleavage. “I’m sure.”

He had to keep a clear head and a watchful eye. Some monster was threatening the woman and her co-workers. To date, they didn’t know if the threat came from a religious nut, a thwarted lover or maybe the jealous wife of one of the patrons. As the new guy in the department, he’d gotten stuck on the case.

He had nothing against naked women or drinking, but he wasn’t allowed to partake of either on duty so this was torture. He also preferred to be alone with a naked woman.

That he could remember. Who wouldn’t remember a big break-up on Valentine’s Day? Or having a huge heart-shaped box of chocolates bonk him on the head?

If the cheesy decorations on the walls were anything to go by, it was almost Valentine’s Day again—the worst day in the world. When he got off duty, it was his turn to have a stiff drink!

Share what you thought about Naked Ambition and earn reward points.