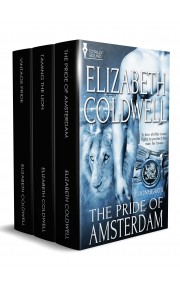 The Lionhearts series: Part One

He doesn’t believe in the paranormal. Can a gorgeous shifter prove him wrong?

Ethan Wayne is a paranormal investigator for the hottest reality show on TV, Spirit Seekers, but his love life is decidedly lukewarm. Reeling from a sudden break-up, he finds himself heading for France, where his team will be exploring the Château LeBlanc, searching for the ghost of a murdered kitchen maid. When he meets the château’s reclusive owner, Jean-Luc LeBlanc, the attraction is fierce and instant—but Jean-Luc is keeping secrets the skeptical Ethan could never have imagined.

Jean-Luc’s world collapsed with the death of his beloved Benoît. He no longer cares about producing his award-winning Champagne and even his closest family members can’t rouse him from his self-imposed solitude. The last thing he wants is a team of ghost hunters intruding on his privacy and discovering the truth of his nature. The realization that one of these brash Americans is destined to be his new mate seems like a sick joke. But soon Jean-Luc has bigger things to worry about than his distrust of humans. His home and family are under threat—can he do what it takes to save all he holds dear, and let Ethan into his heart in the process?

I just love my shifter books! And even though this one talks about shifters and Kaspar does shift, it’s not the main focus. It’s more about the relationship between Kaspar and Jon, the mystery of the...

Share what you thought about Lionhearts: Part One Box Set and earn reward points.