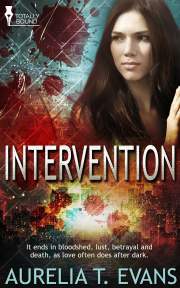 It starts as an intervention for a friend, but it ends in bloodshed, lust, betrayal and death…as love often does after dark.

When Emily’s husband, Land, calls her to come down to the warehouse district at sunset, she thinks it’s just another job for their para-extermination company.

However, he says that he’s finally caught Matt, the third member of their team, who was bitten by a werewolf a few weeks ago and has been missing ever since.

Emily races to the warehouse, where instead of the friendly intervention she and Land had planned, she finds Matt wild in his cage, a creepy vampire duct-taped to a pipe, Land covered in blood from a bite mark on his neck—and not a single easy answer in sight.

“What do you mean it’s seven? Why didn’t my alarm go off?”

“So you decided to go off on your own at night just so I could get a little shut-eye? Land, we’ve watched enough horror movies to know that splitting up is not a good idea.”

“I know. But we’ve also watched enough reality TV to know that not getting enough sleep also isn’t a good idea.”

Emily sat straight up in bed. “You found Matt?”

“The lures worked. He’s in the trap.”

Emily rocked out of bed and yanked on a pair of leggings. Then she did some fancy moves to get a sports bra on without taking off her long tank sleep shirt. “That’s great. That’s really great. Is he okay?”

Emily stopped rushing through their dark bedroom. “Is something wrong? You sound weird.”

“The important thing is that we found him. You should come down. We need to do the intervention together. He won’t listen to me. He’ll listen to you.”

“Um, okay. I’ll get my coffee and drive right over.”

Land had never hung up on her like this, not unless they were in a knock-down, drag-out kind of fight, and they’d only had that twice in their relationship. And both times, Emily had known they were in one.

Her stomach tightened, but she forced herself not to overanalyze.

That didn’t mean she couldn’t hurry. By the time she made it to the warehouse, it would be full-on dark.

She grabbed a large bottle of iced coffee from the second shelf of the fridge. Then she hopped into her subcompact. Land had the company car, but hers had an extermination kit or two for emergencies, so she wasn’t going out to the warehouse district half-cocked.

As she drove away from the glittery, bustling part of the city, the blue velvet of the sky went black.

“Ladies and gentlemen, lock your doors,” she whispered.

I absolutely LOVE what the author did and the tale she told within the few pages of this tale. The sex scenes are intense and so very steamy! I highly recommend this sho...

Share what you thought about Intervention and earn reward points.

Some people prefer leaving certain intimate things to the imagination, but I’ve always liked knowing what happened behind the curtains, and my erotica journey has taken me behind many.