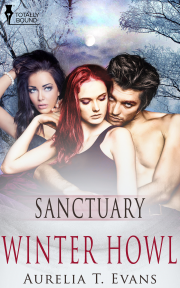 Book 1 in the Sanctuary series

Book one in the Sanctuary Series

Torn between shapeshifters who love her and a dangerous, seductive werewolf, will Renee choose to stay safe or run wild?

Renee Chambers, a moderate-level agoraphobe, runs a no-kill dog sanctuary that doubles as a haven for canine shapeshifters. Britt, her best friend who also acts as Renee's service dog, coaxes an anxious but curious Renee into a romance that has more than a little electricity. With her organisation running smoothly and a girlfriend who loves her, life could be worse.

Then Grant Heath, a rogue werewolf, shows up and turns her safe little world upside down and inside out, with a side of out of control. She knows it's a terrible idea, but when she's with him, she feels different from her tightly wound, controlled self—she almost feels normal. He never does anything she doesn't want, but he also doesn't care how far he pushes her beyond her agoraphobic limitations.

Renee finds herself caught between two different lovers, two different worlds. Should she stay with the shapeshifters and her sanctuary and accept being just an eccentric human being in a supernatural world? Or should she accept Grant's offer to change her and run with him as a werewolf, violent and bloody, but also fearless?

Reader Advisory: This book contains some smouldering rough sex, sex with a very partially shifted werewolf, scenes of violence and death, bloodplay, knifeplay and (if you squint) D/s, mentions of domestic violence…and that's all just around the werewolf! With the dog shifters, we have polyamory, a FF relationship, FFM ménage a trois, some light, loving bondage…

Renee took the last sip from her Samuel Adams and set the finished bottle down next to the first one. She smiled and nodded at Marie, who had come over to take the empty bottles and leave the receipt. There were no words between them. Usually Marie would chat to her customers, but she’d learned when she’d moved to Antoine five years ago that Renee Chambers would not look at her, half of the time wouldn’t talk and the other half of the time would stumble through some painful attempt at conversation. Renee had got better as she’d come to know Marie, but it was still more comfortable for both of them when Renee didn’t try to talk and Marie didn’t try to make her.

Renee left the cash tip on the table, clenched the leash and slid out of the booth. Her legs stiffened when she saw Josh Beall and Marcus Levinson a few booths down. She had not seen them come in, and although she had heard their laughter, she hadn’t recognised it as theirs. She would have to walk by them to leave. The warm body against her leg reassured her, nudged her in the right direction. She took one step, then two. Her knees loosened and let her walk. She instinctively—and fruitlessly—tried to hide in her long, light blue coat.

"...saw her at the supply store getting her checklist squared away," she heard Josh say.

"What’s it been, two months since she last came down here?" Marcus asked.

"What does she do up there all alone, anyway?" Marcus asked.

"Roswell says she gets a lot of mail," Josh said. "He says she has help, but I don’t believe it. She wouldn’t let anyone up there. I bet she does it all herself. Completely crazy."

Renee closed her eyes and breathed in. She was not so egotistical as to believe that everyone in Antoine talked about her, but it was just her luck that she had to walk by these two rubes when they were. Neither was too far into his mug for slurred speech, but they were far enough that they couldn’t gauge their volume.

Josh snorted. "Frigid bitch like her? Don’t think so." He leaned forward conspiratorially. "Hey, what if we went up—?"

"Hey, Renee," Marcus said, even more loudly then they had already been speaking. Josh turned around, his scruffy but reasonably attractive face lighting up with a sly grin when he saw her huddled against the booth table behind them.

"Speak of the scared little devil," he said, raising his glass. "Want a drink? You look a little tense."

Renee’s eyes darted from Josh to Marcus to Marie to the door. At another nudge to her leg, and she stepped towards the door.

"Yeah, come on, sweetie," Marcus said, misinterpreting her direction. "We’ll make it worth your while."

How? Renee thought. By drooling on me and trying to feel me up with all those smooth moves you’ve cultivated over the last ten years? She didn’t say anything, of course, just kept inching along until she finally started past the table.

She lurched forward when Marcus delivered a hearty smack to her ass. It didn’t hurt, but Renee could feel her face start to burn and her chest tighten. At least she could move her legs faster now that she was past them.

"Hey, now, none of that in here," Marie called from behind the bar. "Have a good day, Renee. Don’t be such a stranger."

"You always run away," Josh shouted after her.

"I wonder why," Renee muttered, her tongue looser now that she was out of the bar and no one was looking at her. "Come on, Britt, one more stop before we go home."

Renee winced at the high frequency of the voice and hoped that the mother would know the appropriate way to answer her child. No such luck.

"Hello, miss. Can my daughter pet your dog?"

Antoine was not exactly a highly populated town, but it had a fair tourist trade, particularly downtown Main Street, which was described in most tourist guidebooks as colourful, cheerful, folksy, and unique. Renee did not know about unique or folksy, but many tourists liked to come by for the ambience. And like most townies, the Antoine population had both respect for tourist dollars and frustration with the tourists themselves.

Especially when tourists did not know a service dog when they saw one.

"I’m sorry, ma’am," Renee said, emphatically not looking at the woman. That sometimes helped, and the warm feeling of Britt against her leg reassured her. "She’s working."

"Oh, I’m sorry... Hey, wait, you’re not blind." The overly polite apology turned into a similarly grating voice of parental annoyance. "If you didn’t want Lisa to pet her, you could’ve just said. There’s no need to lie."

"I’m not lying," Renee said. In fact, she was a terrible liar, but that was not the issue at hand. "They do more than help blind people. Please... I need to..."

"Well, that’s just rude, having a dog around when you’re not really blind and then not letting a little girl pet it," the mother said indignantly.

"I’m sorry. She’s working." The words came out short and clipped and curt, but Renee was not really that angry. Her throat was just tightening, and she could feel her shoulders curling in.

"Bitch," the woman muttered under her breath as she grabbed her daughter’s free hand—the girl’s other hand had been playing with Britt’s tail. The little girl was lucky that Britt was an extremely well-behaved dog. The woman led her daughter across the street.

She barely had to tug the leash in the direction of the grocery store. Britt had a deep bond with Renee, had been with her most of her life and been her service dog for about five years. She could feel where Renee wanted to go.

Renee admired Britt’s beauty beneath the deep green service vest. So many people confused her for a Siberian husky, and Renee understood the mistake. They were both northern sled dogs, but malamutes were bigger, with thicker fur. Britt was a little larger than average, and the darkest parts of her fur—set off by the usual white accents—were almost black. Malamutes were not traditionally service dogs. But Renee had loved Britt since the first time she’d met her, and the feeling had been mutual. There was friendship and respect between them, a connection that she had never managed to make with any of the people at school. It was really no wonder she spent all her time around dogs—she understood them and got along with them so much better than she did with most people.

With Britt in front of her, Renee felt secure in her steps. The sides of her coat hood blocked out her periphery, like blinders on a horse, and she felt a little more confident where she put her feet. Besides, with a large dog like Britt with her—a dog that was occasionally confused for a wolf—she felt more protected. Like a celebrity with a bodyguard, thankfully without the paparazzi.

They made it to the grocery store in about a ten-minute walk. That was what she liked about Main Street. Almost everything was within walking distance, so all she had to do was drive into Antoine, walk around a bit, then drive back home when she was finished, rather than drive from one place to another, and another, and another. Renee was able to stretch her legs after the long drive into town, and certainly Britt needed the exercise as well.

Renee did not need to go to the grocery store often, and she did not necessarily need to go now, which just went to show how much better she had become in public places. But she wanted to get a few treats to tide herself over before all her orders were shipped in. That was actually how she did most of her shopping—online through bulk providers. She had the space, the money and the resources, and most of the things shipped in needed to be shipped in bulk. Besides, it was such a long drive between Antoine and where she lived.

There had been a time right after her father had died when she could not even walk into a grocery store without panicking, a time when she could not walk off her property without feeling everything coming in to crush her, as if the entire world had a force field of inhospitality. That was what each successive building had felt like once she stepped out into the world—like a heavy, unpleasant curtain surrounded each of them, and it would take all her effort to pass through. And sometimes she couldn’t.

Share what you thought about Winter Howl and earn reward points.

Some people prefer leaving certain intimate things to the imagination, but I’ve always liked knowing what happened behind the curtains, and my erotica journey has taken me behind many.

Other books in the Sanctuary seriesView Series Page