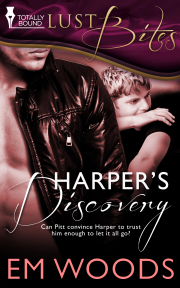 When Harper finally sees the light and dumps his cheating boyfriend, can Pitt convince Harper to trust him enough to let it all go?

When Harper Evans discovers his boyfriend in yet another bar with yet another Joe, he makes the final break and kicks him out. More relieved than heartbroken, Harper turns his attention to the letter burning a hole in his pocket that could mean a fresh start across the country…if he has the nerve to pull the trigger.

Pitt Mullen has been looking for exactly this opportunity with Harper. He doesn't hesitate a second to pounce on it—and Harper—when it shows up. But not everything is as it appears. Harper is keeping secrets. Ones that make a closet submissive crazy with the need to let go.

When Pitt gets a late night call and rushes to another, Harper is towed along in the wake of his hyperactive lover. He discovers that not all secrets are the cheating kind…and Pitt isn't the only male who can melt Harper's heart.

Publisher's Note: This book was previously released at another publisher. It has been revised and re-edited for release by Totally Bound Publishing.

Harper Evans stuffed the unopened letter into his back pocket as the black metal door swung shut behind him. He could wait to see whether he got that new job in Louisiana. Now, he surveyed the dance floor of the hopping club looking for one man.

Edward 'Sly' King was somewhere in this dive, living up to his nickname. Harper had no doubt he would find the jerk in some Joe’s arms, dancing like he was single. If he hadn’t already fucked someone in the back room.

A flash of white dress shirt lit by the black lights at the edge of the dance floor caught Harper’s attention. He peered closer, trying to make out the writhing body through the smoke. There he is. Harper stalked across the floor, dancers parting around him, warned off by the dark cloud on his face, until he reached the couple in question.

Sly’s pale green eyes widened as he pulled away from the slender brunet wrapped around him. "Harper."

"We were just..." Sly trailed off as he swiped a lock of dirty blond hair behind his ear. It was a nervous habit Harper had thought cute until he realised Sly only did it when he lied. Now it just irritated the fuck out of him.

The constant flutter of Sly’s fingers over his hair as he tried to think fast to get out of this confrontation did more damage than good. Too bad it didn’t occur to him that it was just too late for more lies.

"What did I say the last time I caught you out?" Cold realisation simmered in Harper’s belly, hardening into resolve. He wasn’t anyone’s pawn. If the man didn’t want to be in a relationship, Sly just had to fucking say so.

Of course, with Harper paying for everything, why would Sly want to lose that?

"That we’d be through if I did it again."

Harper waved a hand between them. "This is over. Get your shit out of my apartment."

The wounded look on Sly’s face would have given Harper pause if he’d really given a shit about the other man. Instead, Harper found he was more relieved than anything else to be rid of this particular bit of baggage.

Sly nodded, hanging his head in what Sly would have called a suitably remorseful fashion. "I’ll swing by tomorrow."

"Good." Harper turned away from his ex, wanting nothing more than to put tonight’s events behind him. Ten steps later, he found his path blocked. Not many men would knowingly step into his path, taking the risk that he would walk right over them. Really, only one that Harper knew made a habit of it.

Harper had inherited his mother’s dark eyes and hair, then, since puberty had blessed him with long gangly legs, Harper had spent his spare time in the gym keeping up with his growing body. But Pitt was a study in contrast to Harper with his sky-blue eyes and dark blond hair. Tanned skin, a pert nose and cheeks that dimpled completed the prettiest face Harper had the privilege of knowing. He’d dreamed of Pitt more times than he cared to admit, but he’d been dating Sly, which had made him unavailable. Until now.

Share what you thought about Harper's Discovery and earn reward points.

You began writing in school so please can you tell us about your time on the newspaper.

Ah, the good ol’ days. During high school I wrote for my school newspaper, doing articles on lunch prices and other such important things, lol. It’s where I discovered that I had a preference for fiction over nonfiction…