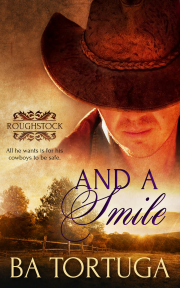 Book 2 in the Roughstock series

All Coke Pharris wants is for his cowboys to be safe—all of them. When rodeo clown, Dillon, sets to prove that there’s more to the bullfighter, people could get hurt.

It’s Coke Pharris’ job to save bull riders from bulls, and he takes his work very seriously. Which is why he’s devastated when one of his favorite riders gets hurt, and he’s determined to help the young man ride again. Dillon Walsh is the arena entertainer for the bull riding tour, and he wants to help. He also wants Coke, has been admiring the man for a long time. He hasn’t made a move on Coke for fear of messing up their friendship, but when he finds out Coke might feel the same way, Dillon has to try to win Coke over.

Coke thinks he’s too old for Dillon, too beat up and scarred, but he can’t resist when Dillon finally makes a play for him. Dillon is like a wet dream for Coke, and the two of them have a great time getting to know each other better, at least until the danger of their job threatens to come between them. Will Dillon and Coke be able to help their friend and weather the problems that blow their way?

Dillon Walsh wiped sweat off his forehead and slid his hat back on, giving the crowd his little trademark hip roll when he did. It was almost time for the short go, which meant it was almost time to get behind the barrel and stay quiet, for the most part.

That was good. He was freaking tired, a little grumpy and he wanted to kick back and have a beer and let his calf muscles stop cramping. Of course, the short go was when he got to sort of wander and watch Coke work.

That was always a good thing. Really, really good.

There were bullfighters—then there was Coke Pharris, the Fearless One. Wide shoulders, square jaw, big old hands, calves like… Fuck, did anyone on earth have calves like those men? Coke wasn’t scared of shit and the man knew those bulls like no one else.

Nate and Fred waved him over to huddle, get pumped up. Dude. Coke touching. Nate Walker clapped one arm over Coke’s shoulders, the other dwarfing Fred’s skinny ones. Nate towered over the other two, but it was Coke giving direction, Coke calling the shots.

Had been that way since long before he’d joined the tour.

Rumor was it had been since before John and Lefty retired.

His mouth watered a little, and someone squawked over his headset, telling him to dance, to get the crowd pumped up again. The first rider was taking too long to set up.

Pasting on a smile, Dillon cued the music, letting his sore legs warm up with a few seconds of bouncing before going into a full-on Jitterbug routine.

He had to stop mid-step as the chute popped open, Sam Bell sticking like a tick to a dog.

There was something about watching one of the veterans, one of the ninety-point club members. They just sat those bulls like the rookies couldn’t imagine, even when they bucked off at six seconds, like Sam did.

Coke grabbed Sam by the collar, hauling him up and out of the way, flinging Sam toward Fred as Nate grabbed one horn, turning Blaze’s attention. Look at those bullfighters work. Look at Coke laugh and slap Sam’s shoulder. It made his stomach hurt, how beautiful that man was.

It didn’t take long—Ronaldo and AJ went down hard, Alan and Rick and Balta stuck. Beau Lafitte, though? Damn.

The whole place went quiet until the ninety-three point five came up on the screen and the confetti went flying.

Dillon trotted over and patted Beau on the back. The little banty-rooster man was on fire this season, now that Jason Scott was out of the running. No doubt about it.

Beau tipped his hat to the crowd and shook Adam Taggart’s hand as the safety man rode by, grinning at him and Coke and nodding. “Thanks, y’all.”

“Look at you, Cajun!” Coke jogged in place winking at Beau. “This mean you’re buying the beer tonight?”

Beau laughed and nodded, waving at Nate, who tossed over his rope. “You know it, cher. I owe you a couple from last month, yeah?”

“You bet. We’ll all meet at the hotel.” Coke winked at him, at Beau, then slapped Nate on the back. “Come on, Nattie. We’re up. The young’un’s slowing down on us.”

The grin Coke gave Nate was self-deprecating as hell. Fred was covering for Cooper Riley and the little Australian was almost like a new puppy, trying desperately to get the big dogs to let him in the pack, play with him.

“Yep. It’s hell so be young and full of energy.” Nate bounced along next to Coke, shaking out his hands and arms, and Dillon couldn’t help but laugh as he made his way back behind the barrel.

God, he loved his job. Even more now that Coke was back from delivering Andy Baxter and Andy Baxter’s busted leg to Texas.

The rest of the rides went easy as pie, Beau taking the round and the event, the crowd milling around and heading down for autographs. Coke and Nate leaned together, forehead to forehead, giving thanks, just like every night. Fred wasn’t in that circle. None of the others were, either.

Dillon always felt a little dirty, watching that and thinking about anything but prayer. Shaking it off, he headed for their locker room, wanting out of his sweaty costume, looking forward to that beer Beau had mentioned.

A noogie later, Nate rolled out from under Coke, leaving the man a little like a turtle on his back. Coke’d been broke so many times there wasn’t much bending to speak of. “Dillon, son, gimme a hand.”

“Sure.” Pasting on the same smile he had for the crowd, Dillon turned and gave Coke his hand, hauling the man to his feet.

“Thanks, son.” Coke patted his arm, eyes warm and shining. “You coming to have a beer with us?”

“I’d love to.” His grin stretched into something real, Coke always making him feel good. “I was just out there thinking how I needed one.”

“Yep, I hear you.” Coke’s shoulders rolled, the outer shirt coming off, then the vest, exposing a scarred, solid chest covered in a mass of curls.

Dillon nodded, but he wasn’t really sure what Coke had even said. He was too busy staring at the little brown nipples. Good God, what on earth was wrong with him tonight? Usually he could be cool if he needed to.

There was this little scar, curling down from Coke’s ribcage down into the tighty-whities. Yum.

“How’s Jason and Andy, man?” Fred still sounded more like Australia than anyone on tour but Packer. Even Adrian said ‘y’all’ sometimes.

Something about the little exchange had Dillon forgetting all about the shirtless thing, making his nose twitch like a hound on a trail. He was Jason Scott’s biggest fan, and the man had been hit damned hard.

Coke’s cheeks went pink and Nate stepped in between them, puffing up a bit. Oh. Oh, man. Something was up. Something big.

Everyone knew everyone told Coke everything.

And a Smile by BA Tortuga is one of my all-time favorite books. Seeing the two men's story unfold is truly a beautiful thing to watch happen. Not only do they develop an amazin...

And a Smile is another great installment of hard working men and steamy cowboy lovin’ in the Roughstock series and I am so glad I won’t have to wait too long to read the next book in the se...

Share what you thought about And a Smile and earn reward points.

Other books in the Roughstock seriesView Series Page