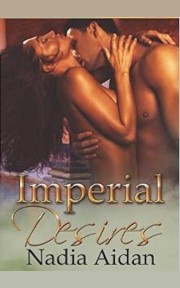 Centurion''s Honor-Book One in the Imperial Desires Series Daughter of the conquered ruler of Siga, forced to submit to Roman rule over her homeland, Anan Septinius has nothing but contempt for the Romans who now occupy her land and her home. Until she comes face-to-face with two centurions who stir her like no other. After surviving a nearly career-ending scandal, centurions Cassius and Titus are relegated to a remote post in the barbaric land of Siga to serve as personal guard to Anan Septinius. Dreading the menial task of guarding some foreign queen, they arrive anticipating a bitter, old widow but Anan is not at all what they'd expected. They're greeted by a woman who is as beautiful as she is intelligent, whose loathing for them is only rivaled by the long-denied desires burning in her gaze whenever she looks their way. They are bitter enemies, but in a harsh land a forbidden passion flares between the trio, one that has the power to heal their ravaged souls if it doesn't destroy them first. Centurion's Vow-Book Two in the Imperial Desires Series Nivea has suffered once through a loveless, passionless marriage and refuses to do so again. Set to wed in two months time, she overhears Gaius Ovidius joking with his comrades how she shall never please her intended, who is well known for possessing unique desires. Nivea forms an ideaâ€¦ If Gaius knows so much about the pleasures to be had in her marriage bed, then she shall have the handsome centurion instruct her accordingly. Initially set against her plan, Gaius eventually agrees. After all, how difficult could this be? Nivea has offered him a substantial sum in exchange for his lessons, and she is quite comely. Not an arduous task to bed a beautiful, lonely widow. It should have been a simple business transaction, a mutually pleasing but brief affair. Yet Gaius never wagered Nivea would steal his heart. Now just days before her wedding, Nivea will be forced to chooseâ€”abandon a life of security with her intended for a lifetime of happiness with Gaiusâ€¦a man who can offer her nothing except his love. Centurion's Capture-Book Three in the Imperial Desires Series From the time she knew desire, Olivia has wanted Claudius Ovidius, but the retired centurion has long vowed he would never have herâ€”because she is too young and innocent to the ways of lovemaking. But Olivia is not a girl anymore, and while she may not be skilled in the ways of pleasing men, she knows of Claudius' dark desires, and is certain she is up to the task of pleasing him. Claudius vowed he would never touch Olivia, but the girl is making it damn hard. When he visits the decadent club known only as The Cave and spots Olivia there, he demands she leave, but she's defiant, testing the last vestiges of his self-restraint. On that night, there are no more excuses or denials standing between them. And soon Claudius and Olivia find themselves playing a dangerous game of seduction, one that spirals into a passionate affair, igniting desperate longings and dredging up a dark secret Claudius thought forever buried.

Share what you thought about Imperial Desires and earn reward points.