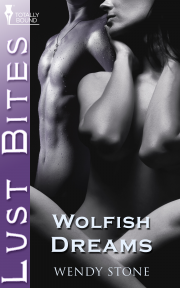 Josie Macomb hadn't expected to meet Teagan O'Roarke when she drove up to the deserted old cabin, but he was there, in her dreams.

A werewolf, Teagan dream walked with her, making love to her, showing her a love with a gentleness she'd never known before. But he could only be there in her dreams, a fact that Josie had to find a way to reconcile. But would he stay in her dreams or would Teagan be the man that Josie needed?

The cabin was dark and unwelcoming as Josie Hare pulled past the final curve and drove into the clearing. She sighed tiredly as she looked with sceptical eyes at the cabin. She’d needed this time, planned for it, yearned for it. Now she wondered if she’d made a mistake.

“Okay, Josie, there’s no help for it now. Let’s just get inside and get some lights on.” The sound of her voice seemed to give her courage, and she slipped tiredly from the rented SUV. The trip had taken all day, starting early this morning from her home in lower Michigan. She hadn’t expected it to be that long, but the directions she’d gotten from the gentleman renting her the cabin in the forest near Iron Mountain, Michigan hadn’t been exact, and she’d gotten lost after pulling off US-2. After getting some directions, she’d gotten dinner and been back on the right track.

It had taken another three hours to get to the cabin, and after finding the tiny two track road, she’d thought she was lost again. Now she was here, exhausted and ready to just collapse. But she still had to empty the SUV and get the power on in the cabin. Why hadn’t she accepted the owner’s offer to com out and turn on everything for her?

Because you’re too damned proud, the little voice in her head said. You can never accept help and look what that little personality flaw did to you. Josie stretched, feeling the pain in her back even more since she’d been sitting behind the steering wheel for so long. The scar on her lower back still itched from the fusion surgery she’d been forced to endure and had barely healed from. She yanked at the brace she still wore, pulling it down and tugging on the t-shirt she wore under it.

The damn thing made her itch, and she hated it more than anything in her life, but without it, she felt as if her body would collapse, and just accordion down until there was nothing left of her. Picking up her keys, she headed for the front door, grabbing only her purse and overnight bag. She fumbled with the lock, cursing the stubborn thing before finally hearing it click and come open under her fingers. “Finally,” she said tiredly.

She pushed open the door, hearing it squeak loudly. On the shelf by the door was a lantern with a big package of matches just as her landlord had said. Josie dropped her purse and bag on the ground, picking up the lantern and lighting it.

The interior of the cabin was cheery, with drapes on the windows and matching furniture that was a little worse for wear. The inside walls were the original logs, chinked well in between to keep out the upper Michigan winter air. There was a large kitchen table and a small refrigerator, stove and sink in the kitchen. It was rustic but comfortable, and she felt much better after seeing where she’d be staying.

There were a few inhabitants that would need to be run out of town before she could sleep, and she still had to bring in her supplies from the SUV, including her laptop, before she could allow herself to relax.

Excitement gave her energy, and she suddenly felt better about the next month. Leaving the lantern on the porch to give her light, she went back to the SUV and started to unpack, careful of her back. Too much weight and she’d mess up what they’d managed to fix. By the fifth trip, she was tempted to leave the rest until morning, but she toughed it out. Stacking foodstuff into one corner, she carefully carried the box of books she’d brought along to read over to one of the couches.

Her suitcase went into the main bedroom that had a fireplace as well as its own bathroom. All she had left to do was to get the generator started and she’d be all set for the night—besides sweeping out the unwanted insects. Picking up the lantern, she slipped around to the back of the house, freezing when she heard the crackle of a footstep.

She held her breath, uncertain what was out there making noises. It could be anything from a bear to a deer. She didn’t know what kind of animals made their homes in this woods. When eyes shone in the clearing from the light of her lantern, she held her breath, watching as a large wolf stepped out of the woods and hesitatingly approached the circle of light around her.

He was beautiful. A big, gorgeous specimen. His hair was deep black with a white streak splashed across his chest. His eyes were wide set and a beautiful brown, staring at her with an intelligence that was uncanny as well as a little scary.

Wendy Stone only recently began her writing career. A small town girl with a Master's degree from the School of Hard Knocks, Wendy started writing as a way to combat boredom and keep from gaining dress sizes after an accident to her back kept her from working. No one was more surprised than she when people actually enjoyed what she wrote.

Writing as Daniellekitten, Wendy has won many awards for her writing, including Most Influential Writer in 2005 through Literotica.com as well as Most Literary—Genre Transcending. She's been nominated for many of the Reader's Choice awards as well as the Monthly awards at the same website.

Wendy Stone resides in a small Michigan town, spending most of her time writing as well as enjoying time spent with her animals and the company of her family.

5 out of 5! WOLFISH DREAMS is an interlude much like I would dream for I can relate to Josie and the amount of pain she is in very well as I have degenerative spinal arthritis. Ms. Stone created a...

Share what you thought about Wolfish Dreams and earn reward points.