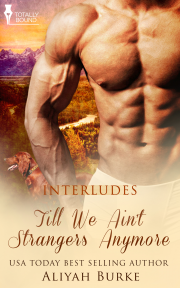 Till We Ain't Strangers Anymore PRINT

Book 3 in the Interludes series

Sometimes a stranger isn’t a stranger at all, but the one you’ve needed all along.

Brent ‘Killer’ Agers is on leave. He needs to heal up and is tired of dealing with stuff around him so he takes a drive, ending up in Haversham, MT, deciding to rent a cabin and recover that way. Little does he know that the woman he couldn’t get out of his mind will be in his life once more.

Maya Brennan is content with her life running the local Bait & Tackle shop. Everything was going according to plan until the day he walked into her office looking to rent a cabin.

She’s never forgotten the man she had the fling with in Hawaii but by his reaction, he doesn’t recall her in the slightest. Once he figures it out, Brent is ready to find a way to prove they’re not strangers any longer. This Recon Marine may be facing his greatest battle yet.

“Wait a sec! You’re fuckin’ turnin’ down free pussy? What the hell is wrong with you, man?” Josh asked, his voice full of shock.

Techno music blared throughout the club, shaking the walls and making anyone who wished to talk have to yell in order to accomplish the feat. People danced—women in less than he considered decent gyrated and rubbed against the men and women around them.

Brent ‘Killer’ Agers stared at his friend and fellow Recon Marine Josh ‘Helter Skelter’ Jones. Beside him were two women that to Brent screamed slut. From the over-painted faces to the attire that left nothing to his imagination.

“Nothing.” He put his beer to his lips and finished it off. “Mind yourself, sometimes when things are free, you can get other freebies which may end up costing you a lot.”

The women scowled at him. “I’m clean.” The blonde spoke in a nasally tone.

Brent arched a brow. “Like you’re gonna walk around saying anything but.” He caught her wrist, halting her hand less than an inch from connecting with his face. “I don’t hit women,” he said, his voice steady. “But I also won’t let you hit me.” He stared at Josh. “Later.”

Releasing the woman, he walked away, needing something else. Something different. Something…not this.

He stepped from the club and walked to the left, heading up the darkened street. The line to the club was long and as he strode along, the chatter of those queuing kept him company. His shoulder ached, as did his leg, and he fought the urge to rub it. He’d taken some frag during their last mission and the damn thing still didn’t seem inclined to give him a break. “It’ll ache for a while,” the doctors had said.

He withdrew his phone to call a taxi then shoved it back in his pocket. The bus was just pulling up. He would take it. He grimaced at the continuing ache as he made his way onto the bus.

He ignored the phone ringing against his hip and sat in the back. His headache had returned ten-fold and he covered his eyes, praying it wouldn’t morph into a migraine.

‘Get to the doctor. Go to physical therapy.’ His CO’s orders rang in his mind and he scowled, smacking them away like one swatted at bloodsucking mosquitoes.

He paid a bit more attention when three gang bangers piled on, swaggering with hostility, their pants hanging around their crotches. He didn’t shift his position, just remained more alert.

At his stop, he rose and disembarked the bus before turning to the right and heading up the street. His phone rang again—and again.

At his room at the Navy Lodge, Brett flopped back on his bed and fumbled for his phone. Staring at the call log, he grunted as he dialed the number.

“Where the fuck are you?” his commanding officer, Barton McKee, snapped.

He raised his eyebrows—it wasn’t often that his CO cussed at him so it made him wonder what had happened. “Navy Lodge, sir. Are we needed? I just returned to my room and can leave—”

“No, we’re not up. Plus you—you haven’t been cleared.”

“Why you’ve not been attending PT. I got a message from Gunny Hoch saying you’d put in for fifteen days’ leave. On top of the convalescent leave.”

“I have it on the books and could use it.” Thank God Hoch had approved it. Brent needed to get away.

“You need to be checking in with your physical therapist. I need you to be getting better.”

Brent ended the call and dropped the phone. “Oops. Lost you, sir.” He rolled over for a moment then lurched to his feet. His actions were jerky as he shoved clothes in his bag. With impatience, he checked out and got in his Camaro.

It was time to drive. Brent gripped the wheel as the engine idled. Where to go? It didn’t matter. He had a month to figure it all out. To figure everything out.

He downshifted and winced at the pain applying the clutch gave his leg—he’d been driving too long and was stiff. Guess I’m stopping here. The town wasn’t much to look at, the population listed on the sign had been only three digits—three hundred and eighty-one.

Wonder how much of an odd ball the ‘one’ feels. He pulled into the service station, hearing the bell sound as his tires rolled over the black rubber hose.

“Haven’t seen—or heard—one of those in a while,” Brent said. The sign over the door was hand painted and worn. He parked in front of the pump before shutting off his engine.

An older man rocked back and forth on the wood planks of the porch in front of the building. A gentle breeze blew around him, clean and crisp.

Brent gazed about, searching for, but not finding, a sign specifying full or self-service. The chair dweller didn’t appear as if he were moving any time soon, so Brent reached through the open window and popped the gas tank.

“Just running through? Or are you one of the renters?”

“Renters?” He peered over his shoulder—the man’s eyes were on him and surprisingly alert.

“Just moving through then. Shame really, you look like you could use some time to relax.”

Who’d look for me here? “What do people do around here?” He began pumping fuel.

“Most who are renting nowadays fish.”

Fishing. A pastime he’d enjoyed a good number of years ago. A lifetime ago. The handle kicked and he withdrew the nozzle. He shut off the pump and replaced the cap in his hand. Hip aching, he walked to the door—which was propped open—and stepped inside.

Dark compared to outdoors, the store was compact. He walked to the counter and smiled at the brunette who slouched on a stool reading a book. She glanced at him, returning his upturn of lips.

“Thirty-seven even.” She gained her feet and stared at him, interest flowing through her hazel gaze.

He withdrew a credit card and his identification.

Her smile became flirty. Helter Skelter would have been all over her but personally he wanted something—or someone—who was more than a day out of high school.

“So are you like a Green Beret or something?” She handed him the slip.

He signed and returned his card to his wallet. “Or something.”

He gave a sharp nod. “Ma’am.” Brent left the establishment only to pause and turn back to the old man. “Where would I go to get a cabin to rent and some fishing gear?”

He rocked back and sent a stream of tobacco juice to the dry ground. “Brennan’s Bait and Supplies.”

Because I know where that is, old man. “Where is that?”

“Go down to the stoplight, take a left, two miles on your right.”

The stoplight. Singular. Solo. Not the first. The. “Thanks.”

“Hope you find what you’re looking for, son.”

Brent paused briefly. Then with a nod, he walked back to his blue ray metallic Camaro Coupe 2SS. He drove off, checking the rear view, and found the old man had returned to his rocking.

It was as if he’d been swept back in time to when towns were small and intimate. He found the stoplight and went left. Not that small towns were a bad thing, just not what he was used to being in on a permanent basis.

“One stoplight. Unbelievable. I expect small in other countries but I’d forgotten about them in the US.”

At exactly two miles, he spied a good-sized building with a large painted sign on the top. Brennan’s Bait and Supplies. There were numerous vehicles parked in the dirt lot.

Brent joined them and watched two guys stroll out, followed by two young boys whose smiles were from ear to ear. He slid from the car and stared at the pickups, SUVs and minivans.

He strode to the door. The bell over his head jangled as he made his way inside. He canvassed the interior out of habit then walked to the counter.

Share what you thought about Till We Ain't Strangers Anymore PRINT and earn reward points.